Does an isolation transformer make CRTs any safer to work with?

CRT tubes are often described in training materials as huge capacitors capable of delivering very high voltages, often enough to severely injure or cause death. Before working on them, they should be discharged by shorting the pins on the tube's neck to the chassis or ground.

Unfortunately, the comparison to a capacitor confuses me. The two plates of a regular capacitor are in reference to each other, not ground. Does this mean the CRT tube is not really a capacitor, per se, but the anode; and earth ground is the cathode?

To add to my confusion, assume we were to power the CRT using an isolation transformer and then turn it off. Is the charge in the CRT still in reference to isolated ground, meaning it is safe? I suspect not. My reasoning is the charges are from static electricity. Am I correct?

Finally, many electronics materials strongly the use of an isolation transformer for safety reasons. Does this, however, pose a false sense of security if the CRT charge is in reference to ground?

From Wikipedia aquadag. Note that the inside surface is coated with aquadag, which is wired to +High-voltage. The wiki considers this the inside coating:

In some CRTs the aquadag coating performs a third function, as a filter capacitor for the high-voltage anode supply.[4] A second conductive coating is applied to part of the outside of the tube facing the inside coating. This outside coating is connected to the ground side of the anode supply, thus the full anode voltage is applied between the coatings. The sandwich of the two coatings separated by the dielectric glass wall of the tube form a final capacitor to filter out ripple from the anode supply. Although the capacitance is small, around 500 pF,[4] due to the low anode current it is sufficient to act as a filter capacitor.

If your CRT has that dark dull grey aquadag coating on the outer surface of your C.R.T., then you should also notice that it is somehow grounded - usually with a spring-loaded strap connection. This ground connection makes the "~500pf" capacitor into a high-voltage low-pass type filter.

A bare C.R.T with un-grounded outer aquadag is a hazard.

Most large television C.R.T. have an outside conductive aquadag coating. If ungrounded, it can charge up to kilovolt potentials, offering you a considerable shock. There should be a path back to your high-voltage supply, and a path to earth too.

The C.R.T face often also collects some charge from the high-voltage DC supply. Not a lot, because the equivalent capacitance is very small - not enough to pose a significant danger to you when you wipe it.
But charge-transfer would still be dangerous to electronics - I'd not be handling loose semiconductors during or after wiping a CRT face.

An isolation transformer can help protect against contact with things that are common with the mains (common in CRT type televisions to have an off-line switching supply with some isolated portions for the signal inputs etc.). Such contact could be fatal so this is valuable, and it can also make measurements easier.

When the set is operating there are numerous dangerous voltages internally which the isolation transformer may or may not help you with. When power is removed there are large electrolytic and other capacitors that may take some time to leak down (or discharge through a bleed resistor).

Then there is the capacitance of the CRT itself, which is used to store energy from the flyback and rectifier (and often there's an integral tripler with associated capacitors and rectifiers built into the so-called transformer assembly). Really old color TVs used a vacuum tube rectifier operated at kV potential which had to be shielded in a metal box because of X-ray emissions.

From the datasheets we can get some idea of the energy stored in the CRT capacitance: 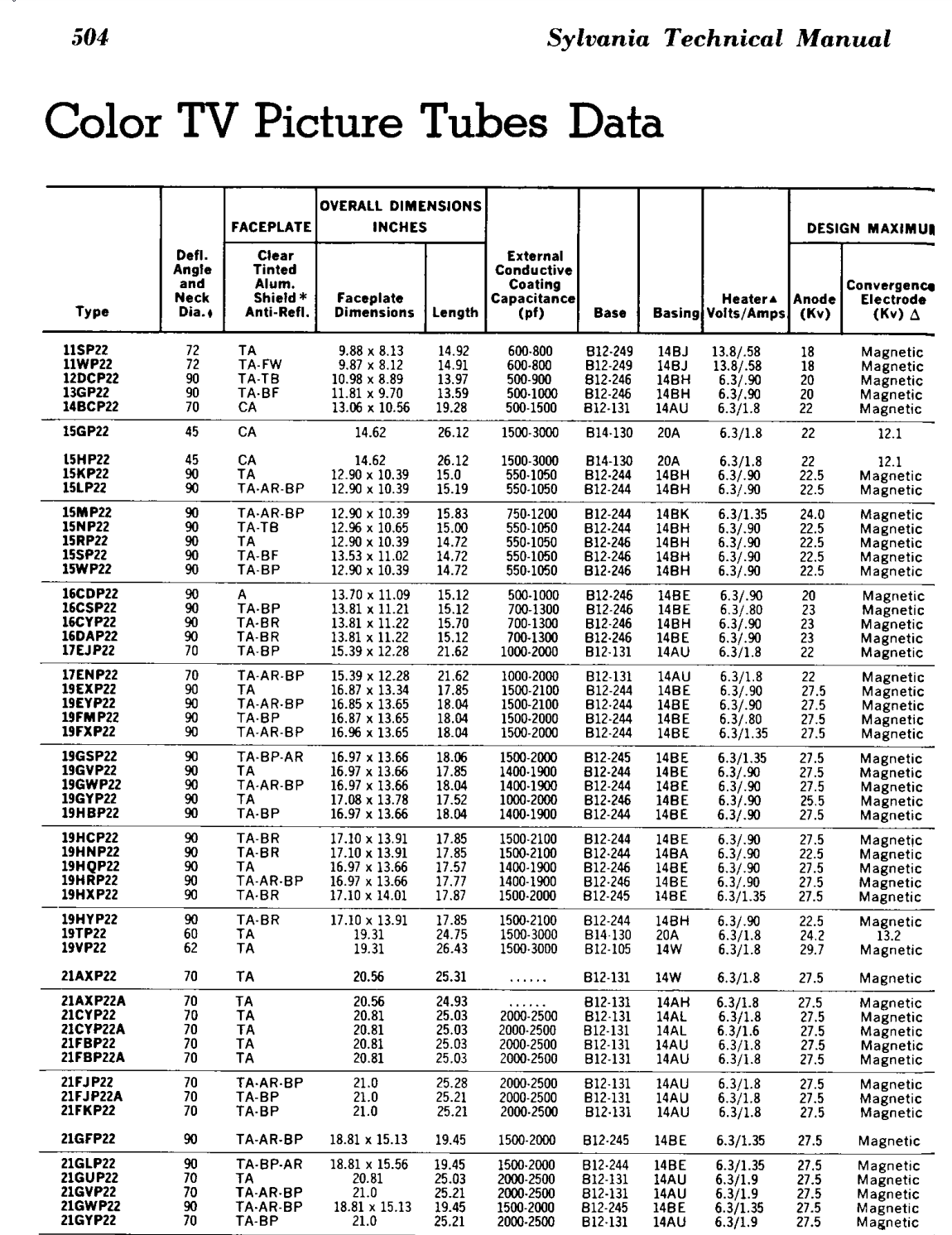 A 21" tube has around 2nF of capacitance and an anode voltage of 27.5kV so the energy is around 0.75J. That's around the energy an electric fence delivers, and having been shocked by both, at least once, it feels no worse.

I’ve worked close to a 5MVA transformer in recent years after I retired , yet never before. I was testing it for Hipot and Partial Discharge. My false asssumption I made one day was putting plywood over the tank top and testing the 200kV insulator bushings on top of this 33kV transformer up to 200kV and discovering they are only rated for lightning transients at that voltage and they flashed over with a mighty zap from a DC test at around 50kV so I had to put 2 bushings in series each about 0.3m long but more important, a Teflon 4x8 sheets around the top ground plane to reduce the E field gradient as I knew sharp angles or points are only 1kV/mm but smooth flat surfaces 3kV/mm so 600mm ought to be good for 600kV but due to surface creapage gets drastically reduced by just a little dust of any small particles with humidity. So my first tests were external lightning bolts. If I was perfect in alcohol surface cleaning and ground plane coverage, but that wasn’t my concern. it was H2 reaching lower explosive level in the transformer oil. But in the end it was good for 200kV externally but the transformer failed for Partial Discharge at 36kV somewhere invisible inside. this lead to me getting paid $20k to solve their problems.

The CRT is a capacitor with a tube grid charge bleed wire on the back of the tube inserted with a rubber cup. The bigger energy is stored in the Flyback doubler or tripler caps with diodes.

One thing they don’t teach is that all capacitors and all batteries have memory. But the TV caps, have HV. Some have much less than others like NP0/C0G caps. usually it doesn’t flag an issue because self leakage dissipates fast on most caps, but not on air caps, or triplers or supercaps or large e-caps.

if you don’t believe me. Short a big cap with a wire and release quickly and wait a minute and measure Voltage. same for any Alkaline battery. Same for high k ceramic caps which is why you never use them in S/H because they remember part of the previous sample.

This memory effect is due to what is called in the Supercaps a Double Electric Layer effect. Where you have at least 2 Caps each with vastly difference ESR and C values so the one with the largest RC=T has the memory.

this is why the short must be sustained for a certain length of time, which might be a minute or simply left on with a bleeder R and a clip.

Use 10kV/cm as your air gap limit to expect a discharge and <1kV/cm for surfaces, like the dust and humidity along a wire insulation surface. otherwise use Alcohal and Silicone for corona leaks. if you hear some hissing that’s corona and if you hear popcorn as well on outside lines with dew in the morning, that’s partial discharge.

the old TV guys wIll tell rookies ... keep one hand in your pocket , then it can’t kill you by going thru your ♥️ ... but even a car plug with 30kV will kick you away from your muscle involuntary contractions like a Karate kick, not from the voltage but the joules of stored charge. 1/2CV^2

With my EE training when I was young and stupid fixing my 1st colour TV, I understood this and learned the one hand rule and had no problems fixing my TV HV and sweep generator Voltage regulator.

just remember voltage has the potential to arc in any insulation even a vacuum or CRT glass tube, but it’s the capacitance of energy and follow on current that has energy. I could generate 50kV on a dry winter day in Winterpeg on old Hotel Nylon carpets with neoprene soled shoes and if I used a key , generate a 5 cm arc with a point source and not feel it be uA se the current density on a wide surface fingers was low. But if you used a finger zap, it might hurt because the zap shrinks to a tiny diameter and high current density.

So using ground is not helpful as Tv’s never used it but using the frame as your 0V Ref becomes your ground.

We could put tinsel from a Xmas tree several feet from the TV CRT and it would fly towards its or flatten out like an antenna or gold leaf cap EV detector.

Static charge build up is from triboelectric friction or stray capacitive current coupling In the case of the <1pF tinsel air gap test to CRT. A HV cap is charged by AC rectifier doublers but the charge Q=CV much bigger.

A CRT is not a capacitor, however, they both store a charge, so that's why it can be said to be a capacitor. A capacitor is nothing more than conductive plates with isolation in between, and CRT can have a structure like that.

No, an isolation transformer makes it no less safe. Compare it to a bug zapper, it is a battery operated device, yet it has two terminals with kilovolts of voltage between them. So a charged CRT still stores a charge, even if you unplug it.

The point of an isolation transformer has really nothing to do with CRTs, but otherwise servicing equipment. TVs just fit into the picture (pun not intended) that they did not always have isolated supplies, they might have a unisolated "hot chassis", so it was common to use use isolation transformers when servicing TVs.

Not the answer you're looking for? Browse other questions tagged capacitor safety isolation crt or ask your own question.