So I have been researching on how a bipolar NPN transistor work. Here are my understandings:

Armed with this knowledge, what I should expect to see in a data sheet should be the following:

How do I navigate the data sheet to obtain this data?

Finally, there is a DC current gain chart in the data sheet, here are my questions

Circuit I am trying to solve 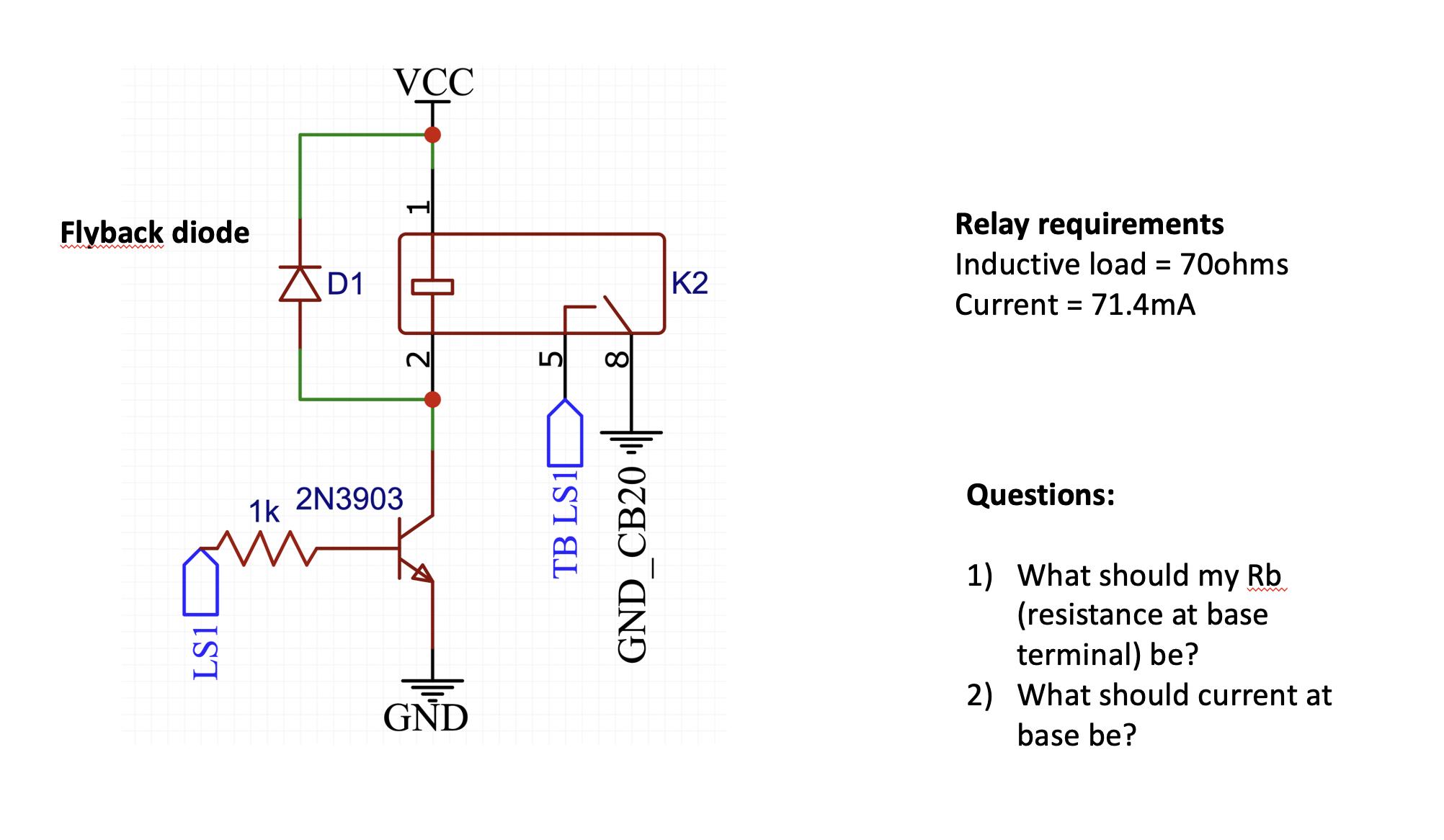 As you can see from the diagram, the relay will only turn on is if there is 5Vdc and 71.4mA across it. Knowing this fact, how do I determine the current I need at the to achieve this?

Vbe/Ice is logarithmic when Vbe=594mV or 0.6V/1.00mA then rBE adds ohmic drop >0.6. So 0.7 is closer to nominal currents >10mA then rBE dominates the Vbe rise above this so it becomes quasi-linear.

hFE varies widely between batches and device doping on different types due to differences in heavy doping of B-E and light doping of B-C so Ic output is easier to work with than Ib, yet both dependant on hFE and Ic.

hFE drops rapidly when Vce<1 because when Vce~0V, BC junction is now forward biased shunting the current source which is high impedance. therefor all Vce(sat) specs are done with hFE=10 @ some currents to measure saturation voltage. It depends on rBE and hFE Max because in general we learn to expect this is a smooth transition as hFE drops with Vce so hFE can drop towards 10 in most devices. But if hFE >>500 to 1500 it might be rated for Ic/Ib=50. But these are more expensive from Diodes Inc.

So we consider as a switch the gain drops towards 10% of Max hFE. yet as a linear amplifier we know hFE increases with current then declines and at max current it can affect linear sine gain with Vce<2V. This one reason why Op Amps using BJT’s do not work well within 2V of supply rail due to lack of gain and hFE effects.

In general with an emitter R base impedance becomes hFE*(rBE+RE) and since Ie=Ib+Ic because hFE is so nonlinear and generally high in linear mode we simplify design with small Re to make it more linear thus voltage gain becomes Rc/Re with linear input current Ib=Ve/Re/hFE=Ie/hFE.

Then after you try H bias you realize it is only linear with small signal output then you decide what distortion is acceptable and learn to use negative feedback with R ratios to regulate gain using multiple stages such as Op Amps.

Start by looking at figure 11 of your first data sheet.

"What if your Vce is larger than 1.0Vdc? say 5Vdc? what would the gain be then?"

You have it backwards. If Vce < 1.0 volts, your transistor is in saturation, and the gain will be quite low, typically 10 to 20 or so. Again, it will change with current levels.

Refer once more to Figure 11 of the first data sheet. Notice that hfe is characterized for Vce held constant at 10 volts.

Furthermore, your statement that "Once the transistor is "on", as the base current increases, the current flowing from the collector to emitter will also increase proportionally by a hfe constant" is only approximately true over fairly small changes in collector current. Again, look at Figure 11. hfe changes with collector current.

Not the answer you're looking for? Browse other questions tagged transistors power-electronics or ask your own question.

6
Problems Getting NPN Bipolar Transistor to Switch On
1
Will there still be small voltage in transistor OFF state?
1
Newbie transistor question, trying to understand
0
Transistor power dissipation, current, and voltage
3
Why transistor doesn't oscillate in this configuration?
2
NPN transistor wired correctly?
0
Semiconductors: Transistor characteristics
1
BJT Transistors - On Characteristics
0
In an NPN transistor, why doesn't current flow without applying a base voltage?
0
BJT transistor, collector base junction