Looking at my circuit:

Am I right in saying that for the output at the collector (V(n002)):

Then my main question is - Why is it that the limits of the biasing/BJT cause a change to the input signal when measured at the base of the BJT (V(n005)?

I'm assuming that you're trying to create a linear amplifier. But perhaps you're investigating behaviour of an overdriven amplifier.

You are driving the base with an input signal too large for linear operation where the transistor has current gain.

The base biasing resistors R1, R2 weakly establish base voltage because their values are large. When the transistor is over-driven, the base-emitter junction pulls a lot more current on positive peaks, because during these positive peaks the transistor has no current gain.
Try looking at base current in LTspice: 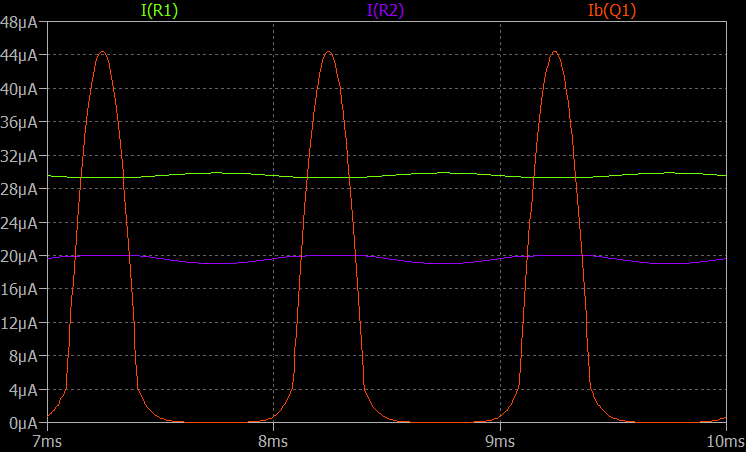 The difference between I(R1) and I(R2) is base current: about 10uA. Base bias current of R1, R2 is only about 25uA with no input signal. When over-driven by the signal generator, current into the base peaks at 44uA - this current dominates the static bias current of 25uA, and causes base voltage to change from its static value ( where you have no AC input).

If you decrease input voltage from 0.1V peak to 0.01V peak, base current becomes more sinusoidal shape, with average value near 2.5uA. Base bias currents from R1, R2 (about 25uA) now dominate over transistor base current. The transistor is now working within (mostly) its linear range, and for the full duration of the input signal cycle, its current gain is nearly constant @ hfe=100.

The effect of this is that your base signal is now supplying a lot of the current into the collector and emitter and hence it clips due to the series resistance you have in the base circuit (Rsig).

The clipping at the high end is because it cannot swing above Vcc?

1
BJT Input AC Signal Amplitude
0
Clipping negative voltage with resistor divider as load
1
Confusion in setting the bias point of an amplifier
2
Why does the positive wave of my class AB amplifier output get clipped far below rail voltage?
0
How does the Common Emitter amplifier ensure low distortion?
2
Why do I have clipping in this emitter follower
7
Is it possible to reduce distortion in a common emitter amplifier?
2
Why are base current and emitter current the input current in common emitter and common base configurations respectively?
0
Cascade BJT amplifiers gain calculation
1
Class AB power amplifier output clipping when input exceeds 1.7V