With a past project using the Arduino UNO and a 10K potentiomter connected to an analog pin on the Arduino in a 5v circuit, the Arduino provided readings in the correct range of 0 to 1023 as I turned the knob. When I changed the set point by rotating the knob, the values reported by the Arduino through the Serial Monitor would also change to follow. When I stopped rotating the knob the reported value would stick without floating.

Attempting the same project with an ESP32 and the same pot but using a 3.3v circuit, the behavior is quite different. The range reported by the ESP32 is greater since it is a 12 bit value so should be between 0 and 4095.

However what the ESP32 is reporting when I turn the knob to a new point are values that will vary, floating about some point in that range even when the knob is not turning. The variation or floating values vary by as much as 40 or sometimes more. With the Arduino the values would change when I rotated the knob and then stick and not float when I stopped twisting the knob.

I've also just removed the 3.3v connector and the ground connector from those pins of the potentiometer leaving only the lead from the sensing pin of the ESP32 to the middle pin on the pot and I still see the reported values change when I would expect them to be zero and stay zero.

The source code for the pin is:

My question seems to be similar to the following:

How to convert 10K Pot raw output ADC data to voltage and resistance from arduino uno? with an answer which seems to indicate that the ESP32 needs a reference voltage for the ADC built into the pin.

The ESP32 ADC can be sensitive to noise leading to large discrepancies in ADC readings. To minimize noise, users may connect a 0.1uF capacitor to the ADC input pad in use. Multisampling may also be used to further mitigate the effects of noise.

and see also this section:

Set the attenuation of a particular channel on ADC1, and configure its associated GPIO pin mux.

How to use ADC of ESP32 – Measuring voltage example https://microcontrollerslab.com/adc-esp32-measuring-voltage-example/

ESP32 Pinout Reference: Which GPIO pins should you use? https://randomnerdtutorials.com/esp32-pinout-reference-gpios/

This article from EE Times, Electrical noise and mitigation – Part 1: Noise definition, categories and measurement, has this to say:

Most engineers would say you have no problem distinguishing the signal as long as you have such a high signal to noise ratio. As the electronic equipment industry advanced, the signal strength went down further, below 10 and then below 5. Today we are fighting 1-, 2- and 3 V signals and still finding ourselves with 1, 2 and 3 V of electrical noise. When this takes place for brief periods of time, the noise signal may be larger than the actual signal. The sensors within the sensitive equipment turn and try to run on the noise signal itself as the predominant voltage.

See this answer Capacitor in circuit for potentiometer?.

To smooth out the pot input, you should use a low-pass filter. It removes all signals that have a frequency that is above the set cut-off frequency. You determine the cut-off frequency by adjusting the values of capacitance and resistance in the circuit.

One simple low-pass filter circuit consists of a resistor in series with a load, and a capacitor in parallel with the load. The capacitor exhibits reactance, and blocks low-frequency signals, forcing them through the load instead. At higher frequencies the reactance drops, and the capacitor effectively functions as a short circuit. 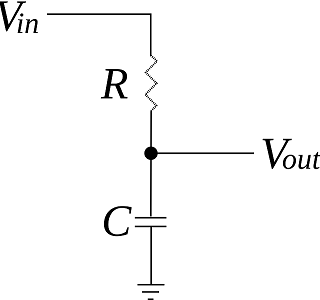 See also De-coupling which notes "Once you get more than a handful of active components together you need to de-couple the power supply. What this is, and why, is described here."

See as well The Ultimate Capacitors Guide: Learn How To Use Them

Not the answer you're looking for? Browse other questions tagged voltage potentiometer esp32 or ask your own question.

26
Why do many electronics operate on 5 AND 3.3 Volts?
3
Capacitor in circuit for potentiometer?
2
esp32-wrover ADC, incorrect values?
0
How to convert 10K Pot raw output ADC data to voltage and resistance from arduino uno?

0
How to convert 10K Pot raw output ADC data to voltage and resistance from arduino uno?
0
No output voltage on wiper when using pot as voltage divider
0
Question regarding series resistor with potentiometer
0
ATMega328 attenuated potentiometer voltage
1
How to simulate analogue output sensor with MCP3008 ADC. Can I use a 10K potentiometer with Raspberry Pi 3.3v?
0
How to read potentiometer value in existing circuit
0
ESP32 camera unable to upload code
1
Reading potentiometer with external ADC