Two-phase system for a smart house?

First I apologize for my ignorance regarding electrical matters. I am analyzing a dataset from a smart house. Some of the power measurements are divided into phase A and B. Their values are somewhat similar (both magnitude and time of occurrence) but different by a small difference.

So this leads me to a few questions: Why are there two phases? Does this house have a two-phase power system? Why only a few of the equipment have 2 phase measurements while the remaining do not? Is the total power the sum of the two phases or the average?

Your help and insights are much appreciated.

'2-phase' just means a split 240V feed with a neutral. These feeds are normally called out as L1, L2 and of course N for neutral. Neutral is tied to earth ground at the panel, L1 and L2 are 120V with respect to that neutral and 240V to each other.

Why a split feed? Early light bulbs worked on 110V; ones that ran on 220-240V didn't come until slightly later. So to work around the problem, both Edison and Westinghouse offered split-feed systems, using 110V for lighting and light appliances, and 220V for heavier loads.

This split approach stuck in the US, while Europe, coming on line later than the US, took advantage of newer metal filament bulbs that could run on the higher 220V.

Some appliances use both L1 and L2, other use only one. High-power feeds like A/C units and dryers use both legs L1 and L2, and will use a linked set of adjacent breakers that pick up L1 and L2 as a pair. Wall plugs and lighting on the other hand only get one leg and a neutral.

You can accurately measure the 240V current by taking the sum of the currents on L1 and L2. Below is an example: 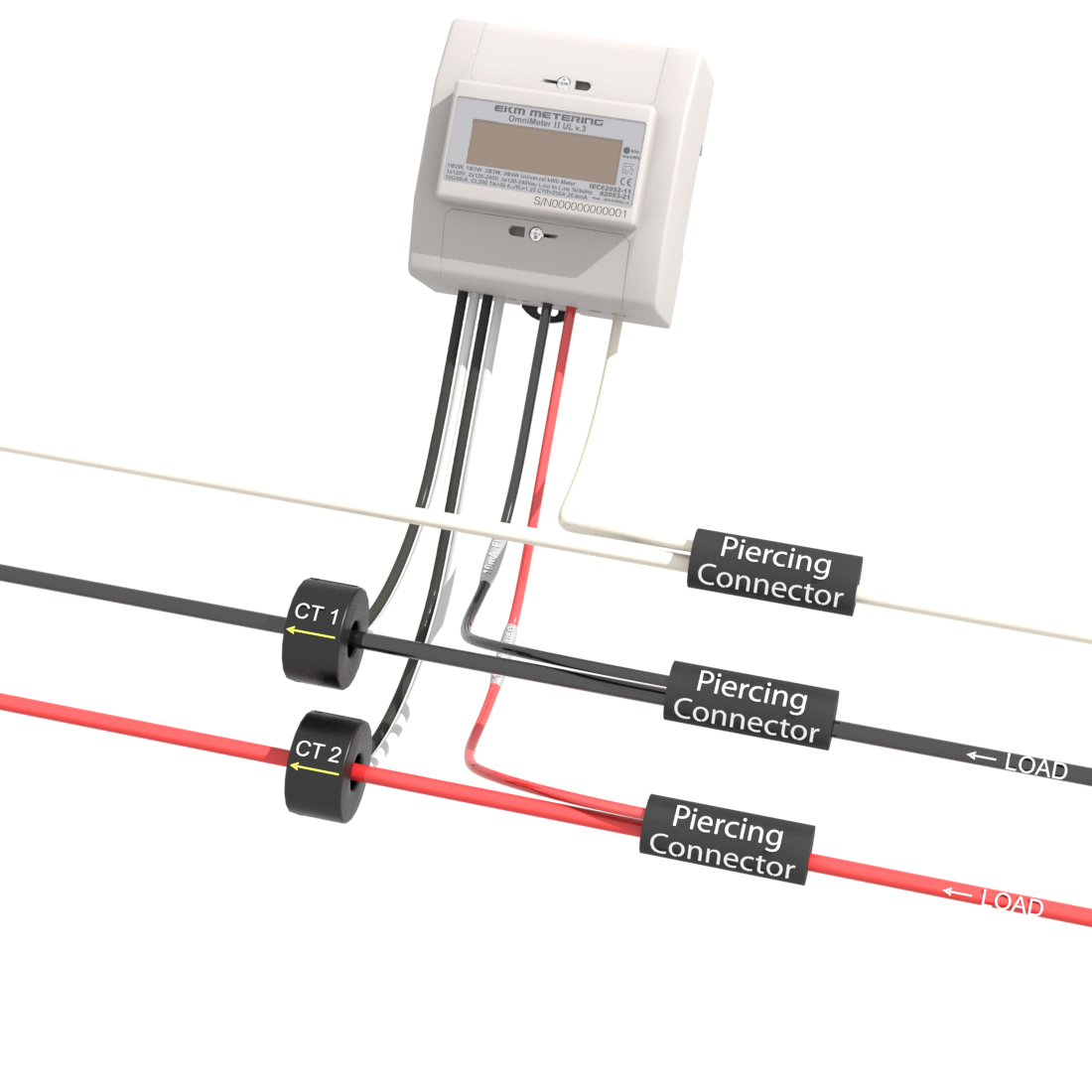 Something to note: a dryer has two separate loads. The motor normally runs from one phase only. The heating element (s) run from both phases.

You will see this while you are observing the dryer current. During the "cool-down" period, the heating elements are turned OFF while the motor continues to run.

A two-phase power system has two phases 90 degrees out of phase. This can't be done with less than four wires. That's a lot of wires for not a lot of power transmission. Needless to say, this system hasn't gone very far.

Three-phase carries 1.732 x as much power on 1.5x as many wires as single-phase, so that is the system that is widely used for high-power applications.

What you're dealing with is actually single-phase, with a center-tap for neutral. This is called split-phase. Calling it 2-phase is incorrect.

The easiest way for a DC-electronics person to think of split-phase as neutral being 0V, pole L1 being +120V, and pole L2 being -120V. This won't lead you too terribly wrong as long as you remember it is AC, and so it's only true half the time :)

Neutral is what electronics people call GND or Vss. AC mains also has a "safety shield" which in that world is called ground, even though it never carries current except during fault conditions.

Small loads in the <=1500 watt territory attach to a 120V leg -- they connect to one phase or the other, and also neutral. A toaster might be hooked up between L1 and Neutral. A refrigerator might attach between L2 and neutral.

It's common to put current monitors on L1 and L2, and not put any on neutral. It's easy to see what is moving on neutral; it is the difference in current between L1 and L2.

When the power monitor sees a 120V load, it appears as activity on only one pole - L1 or L2.

When the power monitor sees a 240V load, it appears as exactly equal activity on both poles.

Some loads (dryer, range) have 240V components and 120V components. The 240V parts of the load present as equal load on both poles. The 120V parts present as load on only one pole. So what you see in net is two draws that are large and slightly different. Examples are:

Not the answer you're looking for? Browse other questions tagged power power-electronics home-automation single-phase or ask your own question.

3
Run heater on two powerlines, where the second line is switched according to the main line
6
Why aren't there any 3-phase domestic power-outlets, or any interest in 3-phase for household (mains) power or anything relatively low-power?
0
Can a triphase current regulator be used with just two phases?
0
How are the individual homes connected in a 3 phase power distribution system (power grid) so that they have correct voltage?
2
What is the equation for mechanical efficiency of a 3 phase induction motor?
0
Effect of Reversed Phase Polarity on Active & Reactive Power of 3-Phase System?
0
Questions about coil voltage and phase shift in the WPT system