A microphone jammer is a device that broadcasts ultrasound waves and, due to the non-linearity of mic amplifiers in small gadgets (i.e. smartphones) it overwhelms the microphone so the only sound the mic hears is hissing/beeping. On the internet there is surprisingly not much about these devices. There is however this link and the github schematic is this one: 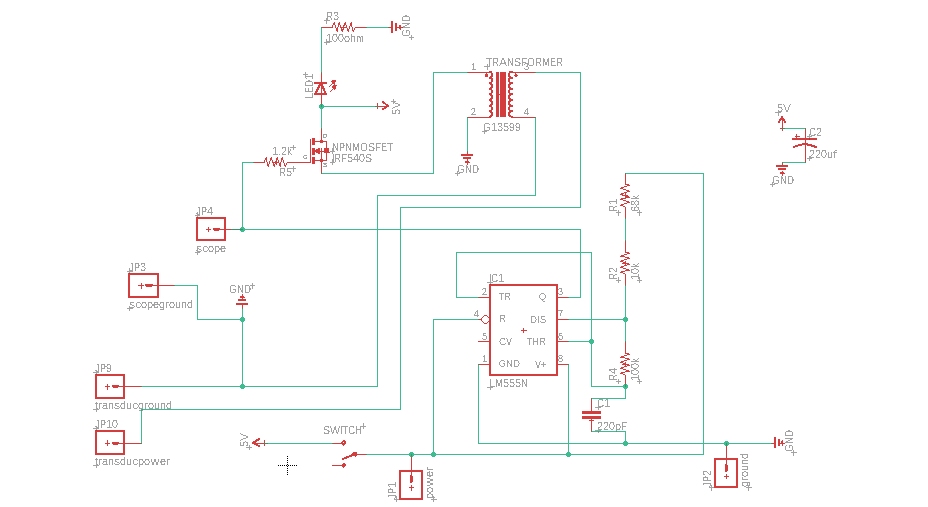 So, I am a relative noob with electronics but the questions are:

Markus, let's walk through the circuit, then talk about whether it "will work" to safely jam a microphone. Answering your questions:

Now, let's talk about safety and efficacy. Even though you can't "hear" ultrasound, it can still damage your ears, and it's even worse for your pets who can sense high frequencies. Be careful!

If your goal is to overwhelm a microphone using out of band nonlinear distortion, you're going to want two things:

With that in mind, I see some problems with your approach:

First, you are using a tiny, low power speaker with a very narrow bandwidth. That conflicts with both points 1 and 2 above. Instead, I would get a large, high power tweeter and a cheap amplifier. These are both inexpensive and easy to get off the shelf items.

Second, the circuit you're showing only generates a single fundamental frequency and its harmonics. This is not going to generate any audio-band IMD, and so is not going to work well. Instead, I would use two timers with the frequency offset by 2 KHz, and a center frequency close to the edge of the audio band. 24 and 26 kHz for example. These will be strongly detected and (if you get enough power) intermodulate to a very annoying 2 KHz.