Device, Circuit, Component to Manipulate a Relay and an LED Light - Open to Any Ideas

This is my first post, and I am electronically illiterate - have mercy on me....

Dealing with an automotive +12V system - and I have a new voltmeter that I'd like to install. In addition to a conventional pointer that swings to a number indicating voltage, it also has a low-voltage warning LED that I would like to utilize. The manufacturer of the instrument offers no kind of mechanism by which to activate the LED warning light, and merely indicates that a "remote relay" or "voltage sensing device" needs to be used to activate the LED warning light.

For what it's worth, the LED by itself starts to illuminate around 2V-3V, and reaches maximum brightness just a bit after that. Assuming the instrument has an internal resistor to manage the current to the LED as it tolerates typical charge voltage in the car, upwards of 14 volts.

What I tried based on my tremendous lack of knowledge, but just trolling around the web, was a relay and a zener diode. The relay is a typical automotive mini-relay, 5 pins (NC/NO). The normally closed contact would energize the bulb as it would be wired to an ignition key switched +12 circuit. With the relay energized, that coil would break the NC connection and kick over to the the NO circuit, which would simply be connected to nothing, but it breaks the circuit proving the +12 to the LED, so LED goes off.

The trick is in energizing the relay. I thought to use a 12V zener diode in reverse bias connected to the contact that would energize the relay via another ignition switched +12 circuit. If the car's charge condition was at least 12v or higher, the zener diode would conduct and trip the relay, killing power to the circuit energizing the LED. Should the charge voltage drop below that roughly 12V, relay de-energizes, and LED illuminates again to indicate a problem.

The relay actually trips at around 6V, and at roughly 13.5V, a likely charging voltage, it's using about 3 watts, 60 milliamps, so I went with a 5 watt diode. The problem is, the diode does not seem to allow enough current through it to trip the relay. I tried it both in series and in parallel as I was told to try it both ways. I used Digi-Key 1N5349BGOS-ND for what it's worth.

So that's what I have tried, simply not having the proper knowledge of how components work, or what would actually be proper for what I need to do. Perhaps this is the completely wrong approach.

I do have a multi-meter as well as a 12V bench top power supply for testing purposes, but lots of electronic ignorance, so open to any and all suggestions. Thank you very much in advance. 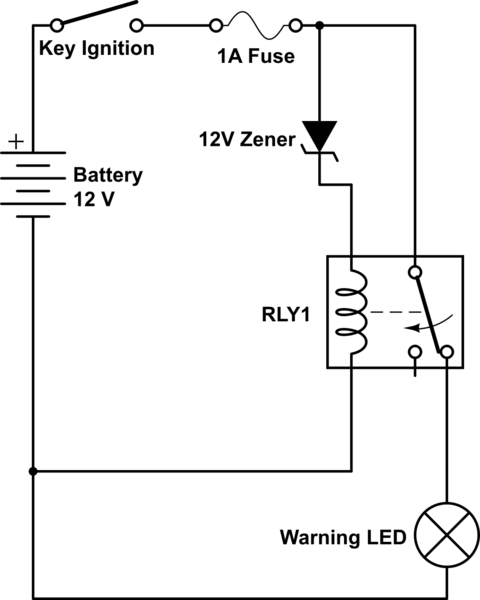 1
How to indicate a relay is activated?
9
Automotive Relays - What is the actual difference?
1
Insufficient current to drive automotive relay?
1
Automotive or solid state relay as main switch for 3D printer?
0
Can 1 relay turn one light off and another on?
1
Using a Small Signal Relay in Automotive Application
2
Diodes needed (parts) for OR gate automotive relay circuit
2
Turning on an automotive relay when enough voltage is avaialble