I'm not aware of any equipment that fits all those requirement. Most function generators can only reach +/- 10 V. Most bench power supplies only supply DC in CV/CC mode.

Digital I/O devices (Arduino, etc.) with faster clock can achieve all those except for the voltage requirement. Perhaps there is some sort of amplifier that can bring the voltage to 60 V, but DC-DC boost modules only works with DC input/output.

Here's a version of a simple circuit to drive a higher voltage output from a simple MCU I/O pin: 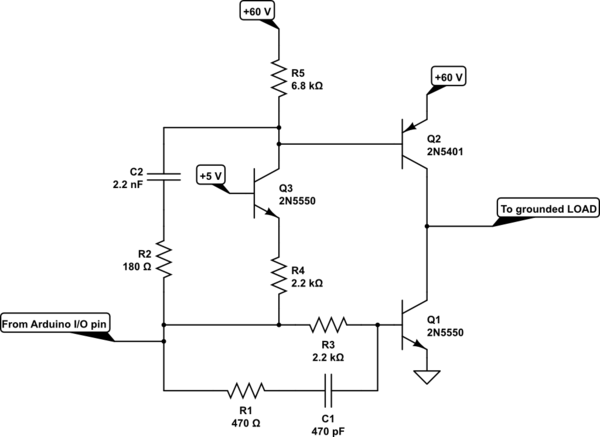 The problem with the above circuit is that the only short-circuit protection it has is based upon the provided current into the base of either \$Q_1\$ or \$Q_2\$. While that does seem, at first, to limit the output in a short circuit situation, the most important problem is that the output BJTs will probably just burn up (dissipate too much) when faced with a short-circuit event. BJTs also have a problem where they can heat up a bit and then be able to supply still more output current. And BJTs vary, anyway, one to another. So nothing is really sure even if you could handle the dissipation.

So the above circuit is not all that safe from accidental events.

A current foldback scheme is probably important to help limit dissipation. This doesn't just limit the current, it also will retard the current in the case of a dead short so as to protect the output BJTs and keep their dissipation to a relatively safe level. 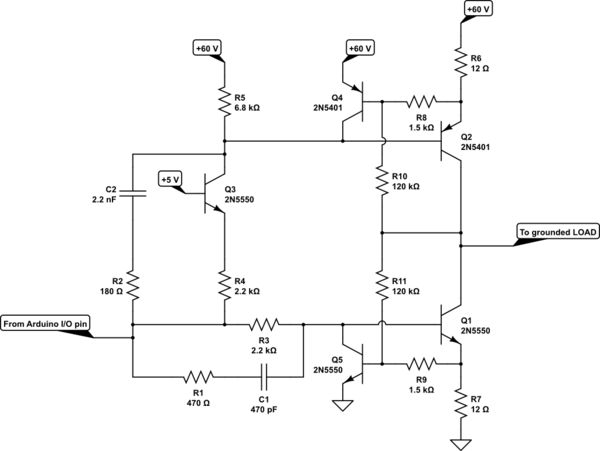 The only addition is a foldback topology for each of the two output BJTs. Yes, it's a little more complicated. But it's also worth doing.

The above circuit will max out at about \$50\:\text{mA}\$ before it starts folding over, hard. It's when the voltage drop across the two \$12\:\Omega\$ resistors exceeds about \$600\:\text{mV}\$. When that occurs, it rapidly flips its behavior over and the load current is forced to proceed through the \$120\:\text{k}\Omega\$ resistors, which will limit the short circuit current to about \$500\:\mu\text{A}\$.

Here's a simulation of the output using varying duty cycles and at your maximum frequency rate of \$4\:\text{kHz}\$ on the above schematic that includes the current limiting and is driving a load asking for \$\approx 55\:\text{mA}\$ (the absolute maximum before it starts folding over, rapidly):

None of this is a full system. It really looks like you have the budget (from your comments) for a commercial unit, if one existed to fit your needs. It might also pay for a good hobbyist to create it and test it for you, before delivery. (It probably won't achieve that with a full custom design from a professional designer -- at least not in the US where educated labor isn't cheap.)

I'm just a hobbyist, myself, and this is probably the approach I'd take. It's cheap, easily cobbled together, and allows me to spend that USD1000 on a fancy tool (toy) that I could better use than squandering the cash here.

By the way, if you build two of the above circuits, you've got two "h-bridges" and can create a bridged output that can reverse the applied voltage on your load (suspended between the two outputs.) Just something to think about.

Which brings up a last point. If you want to buy something, look for h-bridge ICs that can support the voltage you want. (The UC2950T is the kind of thing I'm thinking of, except that it cannot handle the voltage requirement you have.)

Not the answer you're looking for? Browse other questions tagged power-supply amplifier pwm or ask your own question.