How to build the simplest assembly file in MPLabX IDE 5.4

I just started learning assembly coding in MPLabX IDE 5.4. Without connecting any hardware, simulator or debugger, I simply want to build an object code file and generate a listing file from an assembly file - just to check if the IDE works. But I kept getting obscure error messages even from building the simplest possible assembly lines.

As shown in figure [1 - 6], I should have the MPLabX IDE installed properly along with integration of XC8 (which seems to package with it the pic-as assembly compiler or another name for the MPASM assembler - after I struggled for hours asking and searching why a I need a C compiler for MPASM code until I realized they were bundled). I then tested building an assembly file with one single line of comment and one end instruction. The assembly was built successfully, but I can't find anywhere for the listing file (not one *.lst file was found searching through all directories).

As soon as I add any instruction before end, the building process failed as shown in Figure [7]. 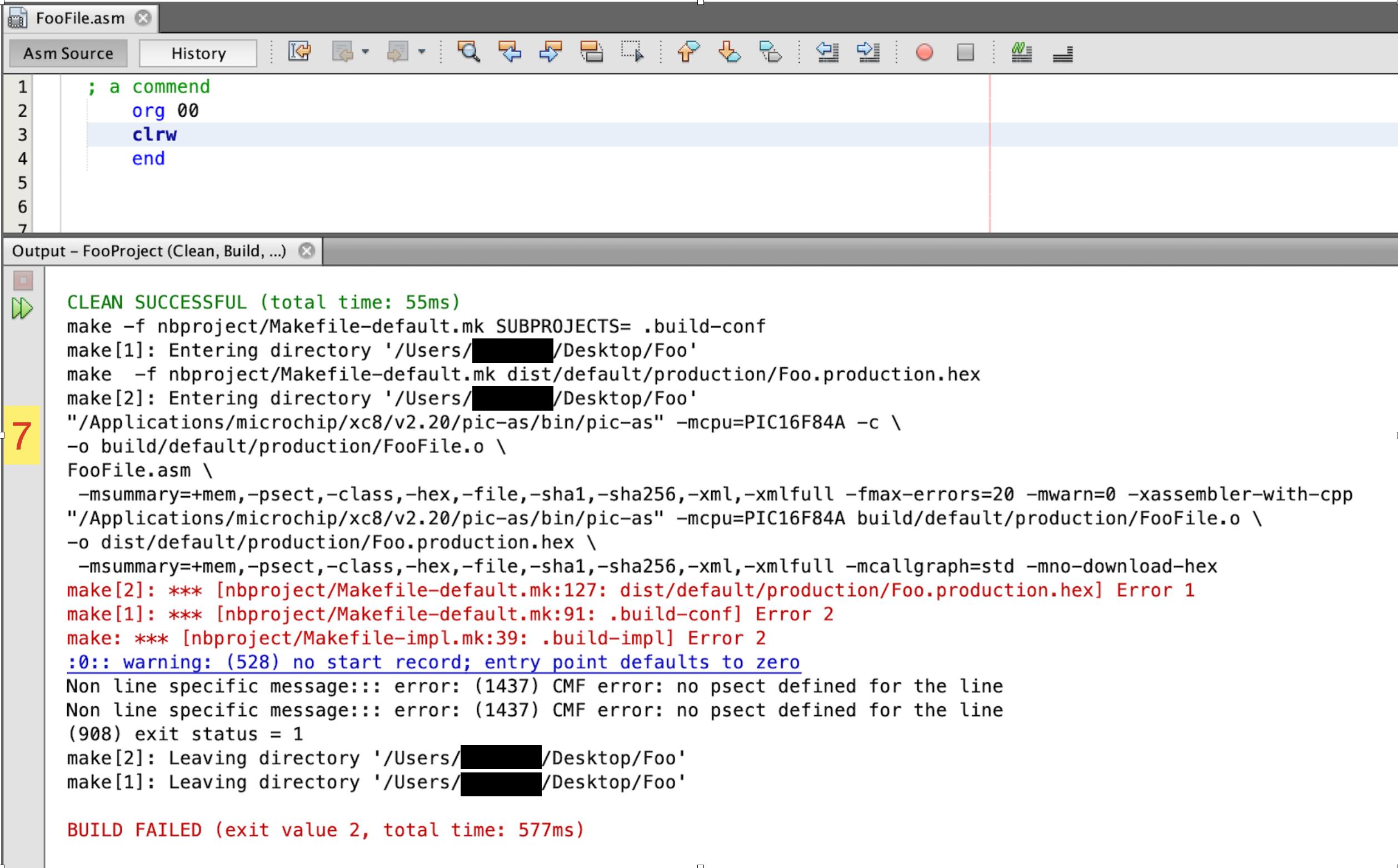 [EDIT]
Here is the assembly code file. The project was generated from step [1-6]. I just created a new assembly file (FooFile.asm) with three lines of instruction - org, clrw and end. 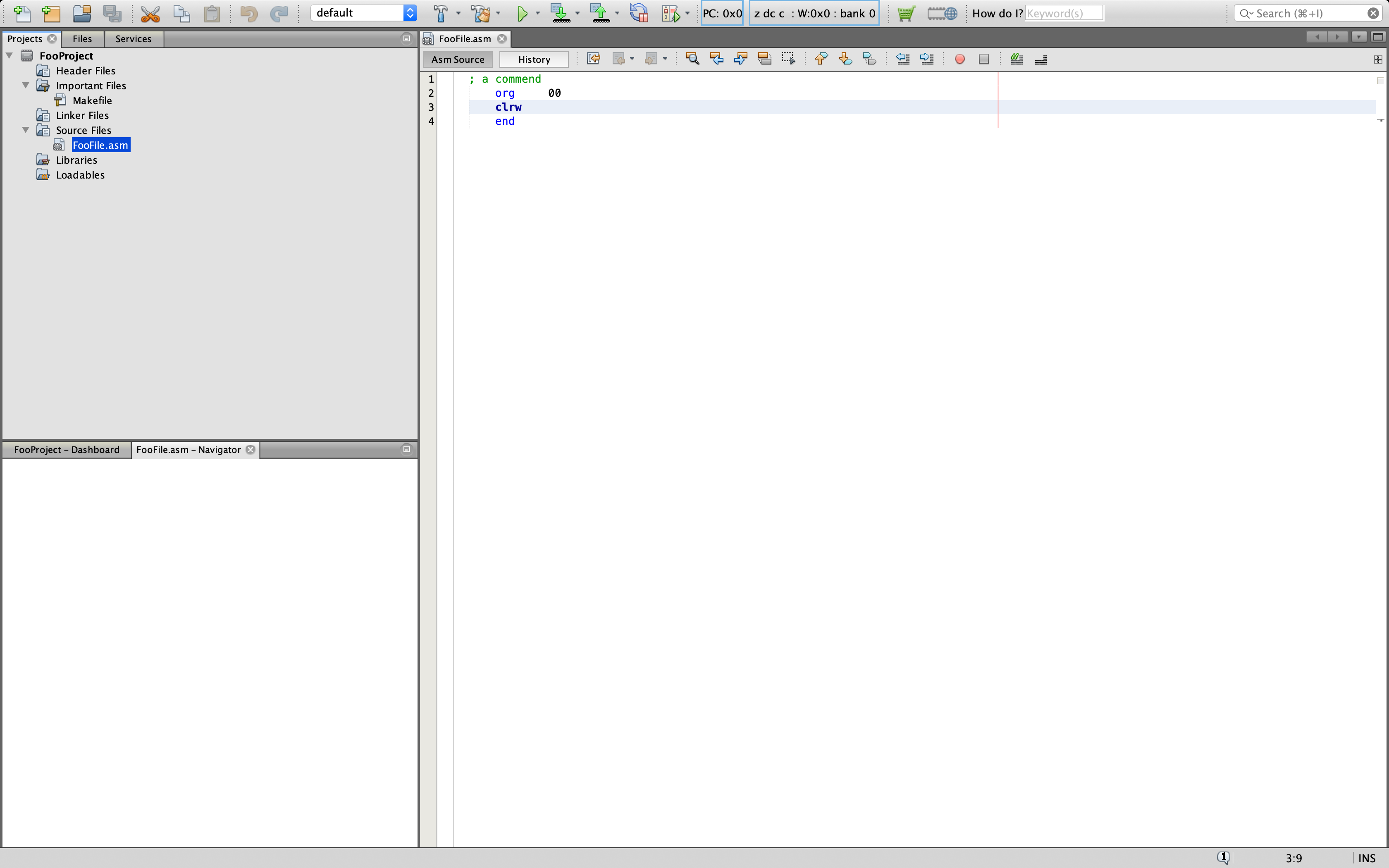 Microchip has made it very to hard to develop 8-bit assembly language applications using the latest release of MPLABX v5.40.

To help I have crafted a PIC16F84A example project you can find here.

If you can please get a copy of the entire MPLABX project from my git repository. There are some things you need to learn about setting up an assembly language project in MPLABX that Microchip has not document in enough detail yet.

I am not an employee if Microchip and they could not pay me enough to do this for them.

I expect issues with the MPLABX tools to become more of a problem as schools start teaching PIC assembly language in the fall sessions. My goal with this answer is to try to help before more students to not get frustrated and fail because of trivial issues with lame tools.

The documentations Microchip has for MPLab X and XC8 are probably some of the worst I've ever read. I had to mesh what I've read from multiple sources, and with some guessing just to get the assembler working in MPLab X IDE 5.4. So here is the assembly code that gets to assemble with no error or warning messages.

For whatever obscure reason, there has to be psect wrapping around the assembly code. The explanation is given as this (I've no idea what it's talking about or why I need to wrap an assembly code like I bracket-wrap a C function call):

Psects—short for program sections—are containers that group and hold related parts of the program, even though the source code for these parts might not be physically adjacent in the source file, or may even be spread over several modules. They are the smallest entities positioned by the linker into memory.

As for the listing file: instruction to read or output the listing file is somewhat mentioned in MPLAB® X IDE User’s Guide's (Section 5.16 on page 127): Window>Debugging>Output>DisassemblyListingFile. Alternatively, the listing file can be outputted to /MyProject/disassembly/listing.disasm (not in the *.lst format as Microchip forum or their guide suggests!) by inserting -code=0h -Wa,-a in ProjectProperties/pic-asLinker/CustomLinkerOptions (there is no mention or instruction in any of their user guide and I just happen to guess right where to insert what from reading MPLAB® XC8 PIC Assembler User's Guide for Embedded Engineers) where it provides examples compiling under the XC8 command line. Neither listing files generated under the IDE provides all details - it doesn't even show the vector addresses of instructions!

I won't accept my own answer. If someone can help address my finding or explain why psect is there and how to get the listing file to show vector addresses I'll accept his/her answer. 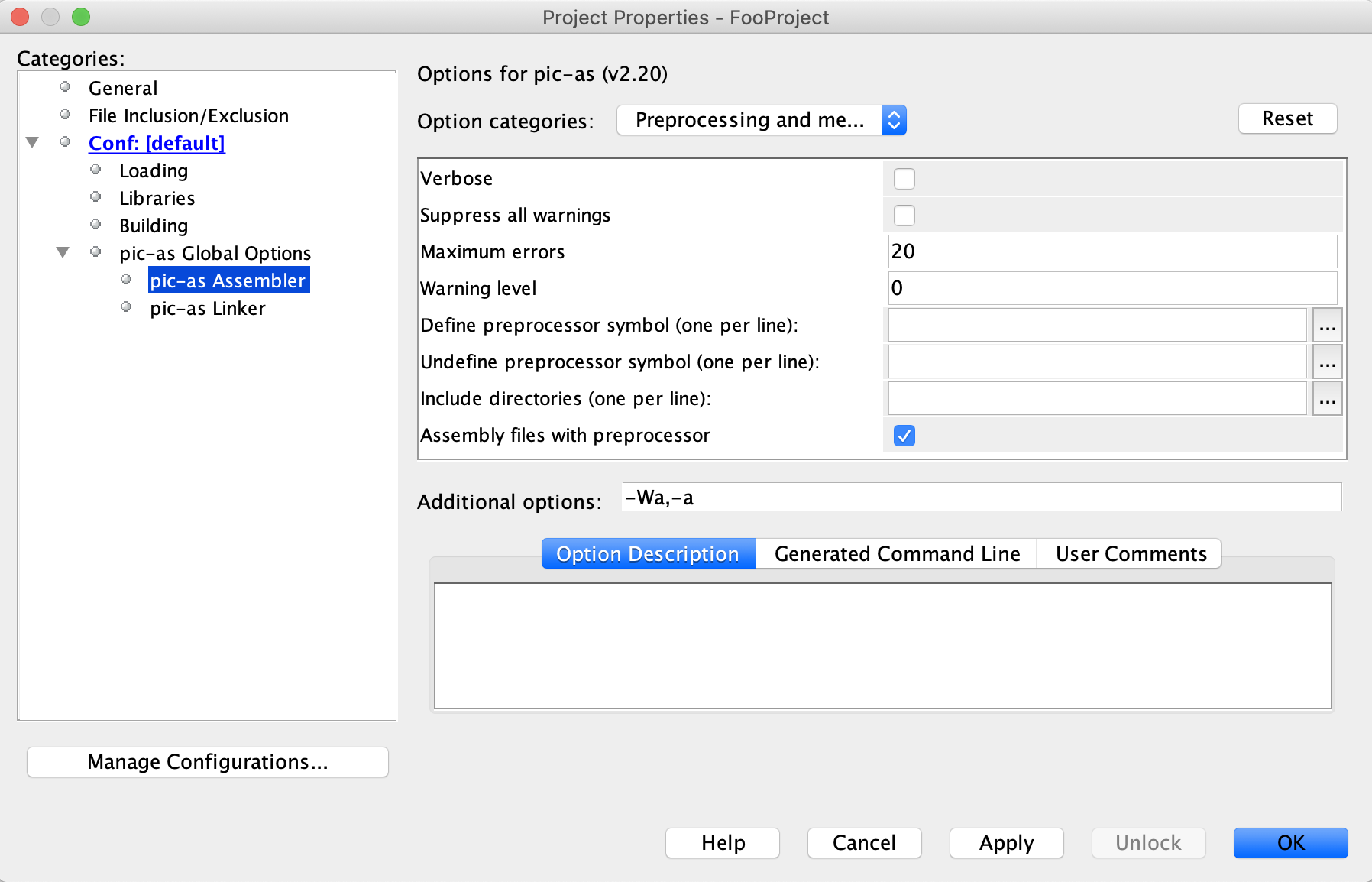 You could have downloaded a legacy version MPLAB IDE v8.92. Works like a charm. I only used this old IDE for programming my PIC's. I tried MPLAB X 5.50 as you did and ran into the same obstacles. The old IDE works better than the new stuff that entirely focused is on C.

Not the answer you're looking for? Browse other questions tagged pic assembly mplabx or ask your own question.

1
Only beta simulator and beta MPASM assembler for 16F1503
0
Configuration Settings of 18F4550 in a header file
2
can't assign PORTD a variable value on PIC18F
1
Build failed with XC8 compiler: error the PIC18 extended instruction set was enabled
0
Why is MPLABX reporting the wrong amount of program memory used?
6
Mysterious hard-fault when I step over
1
Configuration in MPLABX compared to MikroC Pro
0
PIC - How to program them in assembly?
1
Why does the AVR Assembler linker think my data table is at the wrong address?