What happens to ESP32 module IO pins when it is connected to ground but not to power?

I have a circuit with several modules that share a common ground. One of them is a common ESP32 dev board. It looks that if I connect something to an IO pin of the ESP32 then it pulls it down significantly (from 3V to about 1V) when the ESP is not powered. If I also disconnect the ESP from the common ground then the issue disappears.

I tested with a DMM and there is very high (Mohm) resistance between ground and the pin of the ESP.

Is this normal? What inside the ESP32 causes it? 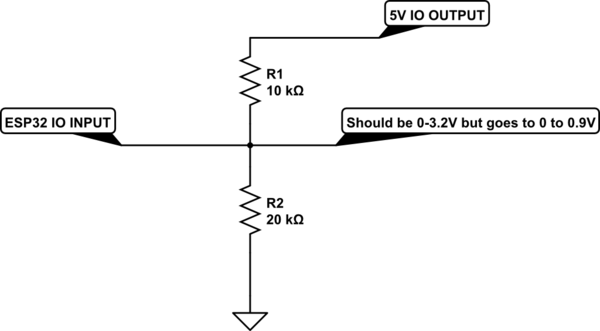 Unless explicitly documented as allowed, you must never apply an I/O voltage to a chip which is outside the range of its own supply by more than a diode drop.

This is because ordinary inputs have protection diodes to the positive and negative rails which are normally reverse biased or have only a small voltage on them due to minor supply rail differences.

But once the protection diode to the positive rail becomes forward biased, the I/O will end up trying to power the chip and everything sharing its power net!

In this case your resistor probably limits stress, but you get stuck with a pulled down signal and a power net that's at about the internal threshold voltage where the circuit would start operating enough that power draw would increase, preventing it from rising higher when fed from such a high impedance source.

But even if you avoid damage, this situation isn't resulting in the intended operation, and likely consumes supply current in a way you were trying to avoid by powering down the ESP32. Additionally there are (other) parts where the power on reset circuit will not properly function if the supply rail was in such a lifted-up condition before "real" power was applied.

In your case with the ESP32 you probably want to do one of three things:

(The exception to all of this is input structures which are rated for moderate overvoltage. For example, many other 3v3 MCU's have 5v tolerant pins which may not exhibit this behavior.)

What is the load?

Why are you wanting this?

Not the answer you're looking for? Browse other questions tagged ground esp32 io or ask your own question.

1
10K Potentiometer with Arduino Uno and 5v works but same pot with ESP32 and 3.3v floating values
0
ESP32 + SIM800L; modem not starting when GPS breakout board is connected
0
ESP32 stalls b/c of current spike (inrush current) - how to limit inrush current?
1
Switching solar power off through mosfet
1
Problem for 3 mini water pumps controlled by transistors with Esp32 Wemos UNO