Would you approve use of these PCBs??? Delamination issue

Our vendor pulled some PCBA out of storage, been sitting for about a year.

They found about 5% delaminated. They claim it was 'because of the storage duration', but I'm not buying that. I think these boards were defective from day one. 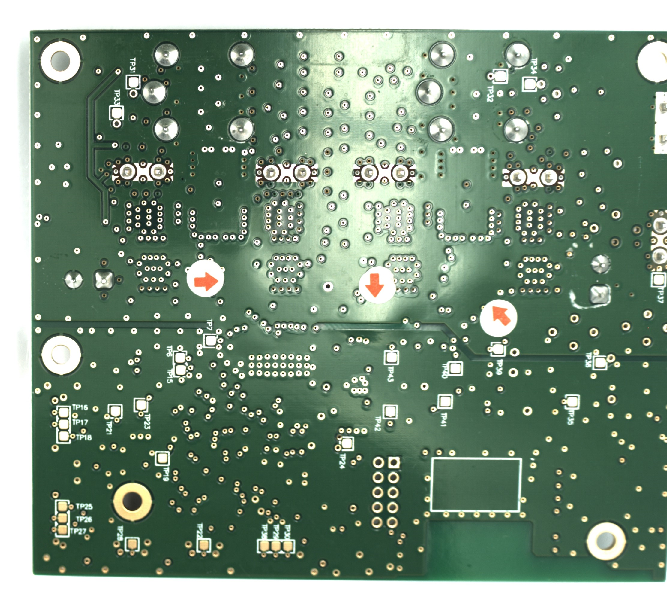 Yes, I know a hatched pattern for the pours is better - These aren't my design.

Anybody think this is a "storage" issue? They're (supposed to be) FR4, so presumably they are fiberglass resin, and shouldn't be hygroscopic. Vendor is in south-east China (Shen Zhen) where the humidity and temperatures are "jungle like" most of the year. I'm sure there was no climate control during storage, I wouldn't be surprised if they were subjected to months of 130F+ temperatures. Maybe storage EXPOSED the issue, but I don't like the theory it CAUSED the issue.

In field, these boards will get quite hot during normal operation. There's a number of high-power MOSFETs on the other side, and the board regularly will see 15A, sometimes much higher during surges (about 35A max or so)

Further, the vendor is suggesting subjecting the entire inventory to a heat-test, basically a shorter version of a reflow oven cycle, to ferret out the bad ones. They're suggesting use some kind of profilometer to detect the 'bubbles'.

This is a 4-layer PCB. We almost "never" use multilayer boards, and I doubt our vendor sees them often either (maybe "never").

This is also a 'safety critical' component.

Any and all comments & suggestions welcome!!!

The fact that they delaminated in only a year calls into question the quality of the workmanship, regardless of the fact that they were in storage. Like you said, if they delaminate in storage they most certainly would delaminate in the field, and in a safety-critical application this is absolutely unacceptable. I would agree with John D that these should be scrapped (depending on the cost, you may be able to work out a partial refund from the supplier) and order new ones from a reputable source. Also, if you have any authority to do so, I recommend pushing a redesign to hatch the copper pours.

If the storage conditions were relatively benign (eg. not cycling back in forth between temperature extremes in an environmental chamber many times), looks like their process was defective, maybe improper process control in their lamination press. Which means that the entire panel that was in the press on that run would be scrap and maybe (probably) every panel made around that time.

Given the low cost of 4-layer boards, you should scrap them and move on. Even if it was not safety-critical the cost of field failures is too high.

There are hundreds of PCB suppliers in the SZ Bay area, you should be able to find a better one across the street.

Definitely toss them. 4 layer boards even made domestically are inexpensive these days.

FR-4 will absorb moisture, and when laminated at high temperature and pressure the moisture turns to steam and creates pockets in the epoxy/glass substrate. My bet is these were already delaminated when they shipped them.

If you are even considering using them, even if you have a few that do not look delaminated, I would bake them at 250 degrees F for a minimum of 4 hours. Then reinspect them.

If you run them through reflow or wave and there is moisture in them it can be very ugly.

I'm going to agree with what seems to be everyone else here: scrap them and try to get a refund. Also stop ordering from this supplier, you shouldn't need to worry about this in your supply chain.

Even if their story checks out and this is caused by storage within a year, that's going to happen again on other units. Maybe if you told its for a household low power toy where margin is tiny and stakes are low, but all of those aren't the case and this is a no-go in your stated application.

Not the answer you're looking for? Browse other questions tagged pcb fabrication delamination or ask your own question.

2
What situation would you use flexible termination ceramic capacitors?
2
Is it mandatory to use thermals in hand soldered PCBs?
0
Can I use aluminium containers to transport ESD sensitive PCBs?
0
Component identification - do you know what are the values of these components?
1
Would these traces cause a short?
4
Why would I use triangular solder jumper pads?
0
What do you keep in mind while branding your PCBs? Design/professional appearance
7
Why do some PCBs have these circular rings? Are they plated through hole vias?