How can you tell what is the net direction of current flow when there are two opposing sources? 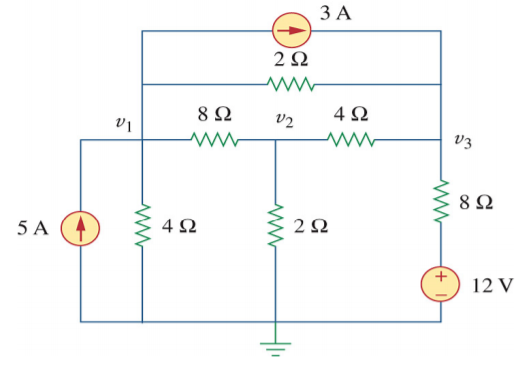 How do you tell whether the 12V source will overpower the 5A source at the 4ohms resistor? Changing the net current direction in Node V2. Or vice versa, if the 5A source is stronger than the 12 V.

Often, it helps a great deal to redraw a schematic. Not always. But sometimes the manual process of it helps you find an insight or two or, at least, develops a feel for things over time as you do it again and again.

Below, I started out by following a rule in the appendix below: don't bus power around: 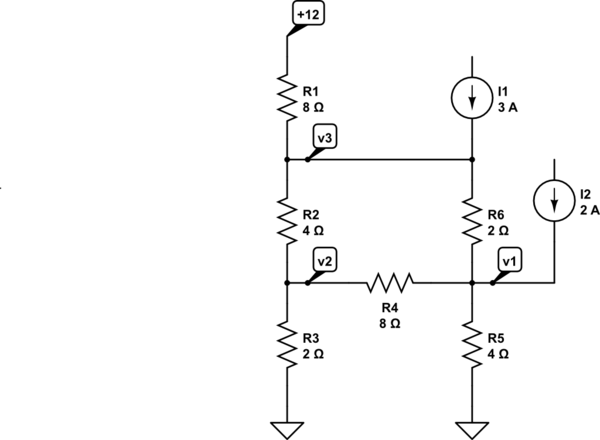 You can use the above as three equations in three unknowns and solve for all three node voltages using linear algebra methods. Cramer's rule is sometimes used when you are stuck doing these things by hand. So look that up. Otherwise, use free tools such as sympy for symbolic algebra and sage for numerical algebra.

No, there's no magic wand you can wave in order to decide if the voltage source is overwhelmed and is absorbing energy over time, or expending it. You just need to push though the details and see.

I also tell a bit of a tale and provide some examples of successful drafting of schematics here.

You just assume a direction and if the current works out negative when you solve the equations, then it was the opposite of your assumption.

Not the answer you're looking for? Browse other questions tagged circuit-analysis nodal-analysis or ask your own question.

34
How were schematics drawn before CAD?
1
Calculation of base current and what decides the current through collector-emitter branch
0
How do I combine multiple common-collector stages without circuit loading or distortion?

4
When using nodal analysis of a circuit involving CCCS, how do you know which currents are entering and which are leaving?
1
Source-free RC circuit current directions
0
How to analyze RL circuit with sequential switching?
0
How do we know the direction to draw the arrows for voltage drops and current direction when drawing a circuit diagram for an ac circuit?
0
How to find I(t)?
2
How to calculate using mesh method when there's a current source and a resistor between two meshes
2
How to find the nodal voltage when there is a voltage source across two nodes?
0
Calculating Equivalent Resistance between arbitrary pair of nodes in finite grid
0
How to find unknowns when there are current dependent sources?