Ask Question
Asked 10 months ago
Active 10 months ago
Viewed 95 times
0
\$\begingroup\$
Closed. This question needs to be more focused. It is not currently accepting answers.

I want to design on-chip antenna (that is, antenna on PCB itself). Is it also called microchip antenna ?

Can anyone provide me details and/or steps as to how to design on-chip antenna? How to proceed designing it? (Question 1)

I want to design my own PCB having an on-chip antenna for GPS module. It is possible, right ? (Question 2)

See below image of sample on-chip antenna design in EAGLE:

Is it also called microchip antenna ?

no. May call it a microstrip antenna, but I'd recommend just calling it PCB antenna.

Can anyone provide me details and/or steps as to how to design on-chip antenna?

That is a complicated question, and you've literally defined none of the requirements, so I'll have to guess you don't really know how antennas work. So, start with a bit of basic antenna theory. Later you can design your own antenna. Designing takes understanding.

I want to design my own PCB having an on-chip antenna for GPS module. It is possible, right ?

Hm, probably not a good idea: GPS antennas are typically relatively selective, so you'd want a design that is proven to work. Also, if you're implementing it directly as traces on the PCB, it'll probably be rather large. You'll also need to match your own antenna to some (most likely, 50Ω) transmission line impedance, requiring more components, and fine-tuning.

So, really, buy an active GPS patch antenna. It solves all these problems at once, and due to the fact that it saves both board space and additional components, will not only perform better, but quite likely even be the cheapest you'll get.

I want to design on-chip antenna (that is, antenna on PCB itself). Is it also called microchip antenna ?

Quite a bit to unpack here: First, a on-chip antenna is an antenna on the IC itself, not the PCB. On-chip antennas generally only become feasible above a few tens of GHz or more because otherwise they are too large.

A microstrip antenna, in my experience, is a name (confusingly) used for patch antennas. A patch antenna is a specific type of broad-side radiating (IE, the majority of the signal is 'fired' orthogonal to the PCB) antenna (in the picture below, the signal would be coming 'out of the screen'). They get there name from their shape: a big 'patch' of material (image taken from the amazing people at antenna-theory.com) 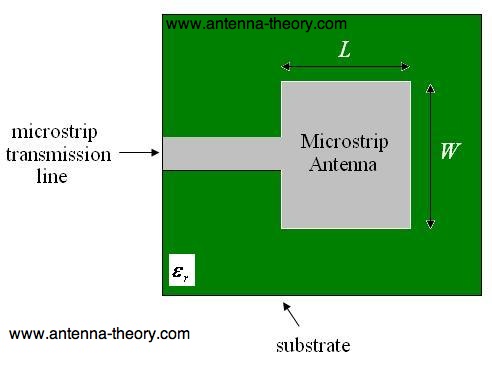 As you can see, even in this image, 'microstrip antenna' is used to discribe the patch antenna. Why is this confusing? Well, the example you gave in your question doesn't act like a patch antenna. It is not a square\$^1\$ resonant patch that radiates broadside. What it is, specifically, is a meandering planar inverted f-antenna. (meandered to shorten length). But it is still made with things that look like microstrips.

Anyways, with that out of the way:

Can anyone provide me details and/or steps as to how to design on-[pcb] antenna? How to proceed designing it?

There are a number of books on the topic. Designing an antenna (esp one which actually performs half-decent) is a lot of work. There are a lot of pitfalls (such as ignoring the environment in the design, packaging, etc). It's not easy, and either requires a lot of iterations in the design process, a lot of (expensive) simulation software, or both.

I want to design my own PCB having an on-chip antenna for GPS module. It is possible, right ? (Question 2)

Yes, it is possible, it is my job to design antennas on PCBs. But unless this is a small hobby project and you are willing to play around with it and deal with poor/nonexistent performance, I would advise going for off-the-shelf antenna modules. There is a good reason why antenna design (and RF design in general) is sometimes referred to as 'voodoo black magic' even by other electrical engineers.

\$^1\$ Technically speaking a patch antenna does not have to be square, and you can find all manner of crazy and wonky shapes in practice.

Not the answer you're looking for? Browse other questions tagged pcb pcb-design antenna embedded gps or ask your own question.