Amp circruit from PC speakers, why the connection to cable shielding?

I've taken apart some Logitech PC speakers in order to use the amp inside an bartop Raspberry Pi arcade game I'm making. There's something I don't understand. The donor speakers work as follows: R speaker has a 2 pin mini IEC mains input and a 9.2V PSU. It connects to the other speaker via a shielded multicore cable carrying the power and return signal. The L speaker contains the amp, has the user controls, jack, etc. audio goes via a heaphone jack then is sent to its own cone, and back to the R speaker via the multicore cable mentioned earlier.

Looking at the connections to the PCB, everything makes sense to me, apart from the fact that the shielding from the multicore is soldered to the PCB. What is the purpose of this? The speakers are obviously ungrounded. In the R speaker the there's notthing connected to the shielding.

When I'm wiring everything up in my bartop arcade, can I just snip that connection? I won't be using the multicore cable at all, as the PSU will be located somewhere totally different to the right cone.

In the picture, you can see the white/blue cables are the 9.2V DC, and the black one above those two is the one that connects to the shielding. 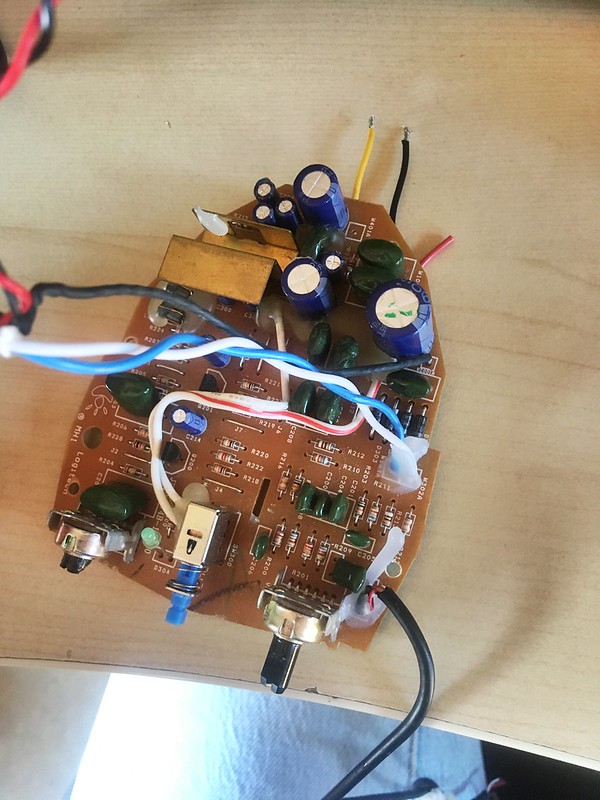 I'll give this a go:

The shield is not being used as a ground for the signal; there's a separate wire for that. It is being used as a shield to prevent the cable from picking up noise, and to do that, it needs to be connected to the chassis (or a ground). It is not part of the circuit.

Whether it should be grounded on both ends is the subject of many a Holy War, see https://www.emcstandards.co.uk/cable-shield-grounded-at-one-end-only, for example. Connecting it at one end only does make sure you don't get a ground loop, which is probably why they chose this way.

It is up to you if you want to use a shielded cable for your sound signal; if you get away with it without the cable picking up unwanted stuff, then all is well. If you do want or need a shielded cable, then the shield will have to be connected to do its work properly.

Edit: almost forgot: the speaker set could be using a class-D amplifier, and these generate high-frequency noise, which can be radiated from speaker lines. Maybe they couldn't pass the EMC-tests without measures, and shielding was cheaper than filtering. Just guessing here.

This circuit seems too old to be digital anything, circa 1980s or 1990s perhaps. Phenolic board with 1/8th watt resistors. No SMD at all. If each board has its own amplifier, those inputs would need shielding, and only the input side would have the shield grounded.

Power supply and analog inputs are very close together in the right-side of this photo, so shielded cable is mandatory. Next to the light-blue wire are 4 rectifier diodes to convert low voltage AC to DC. From this viewpoint the black wire by the large capacitor is power ground.

Not the answer you're looking for? Browse other questions tagged amplifier shielding or ask your own question.