How can I properly measure a MEMS rate gyroscope's zero mean bias drift and are my measurements coherent?

I have been looking into Madgwick filters and fusion algorithms and on the original paper as well as some websites mentionning the subject, it is stated "The gyroscope zero bias will drift over time, with temperature and with motion.".

With this explanation and since it is measured in rad.s^-2, I assume it means that the gyroscope's reading when it is immobile, its zero-offset or bias, would change over time. I tried to measure it on one of my sensors, an MPU9250 (obsolete sensor but its just a test), and did notice a drift, although it is very, very tiny. I can't compare my values to known ones since it is not stated on its product specification sheet.

I couldn't find a proper measurement method so I came up with my own. I continually measure the sensor's output when immobile for a given period of time. Every ten seconds, or around 1200 individual readings, I average the results in a single datapoint representing the current bias and continue to do so for the given period of time. I then calculate the linear tendency curve of the obtained dataset : the equation's slope should be the drift in rad.s^-2 since my averaged datapoints are measured in rad.s^-1 on an X axis measured in seconds.

I tried periods from 1H to 7H to try and see a change. My estimations are variating a lot (around 500% of difference between them on average so it's not very consistent) but their magnitudes are consistent. This drift seem very tiny to me to be correct : this a sample from the gyroscope's X-axis with 2273 averaged datapoints over around 7H (originally more but I cut off 5000s of data at the beginning since I was around the sensor and could have affected it). 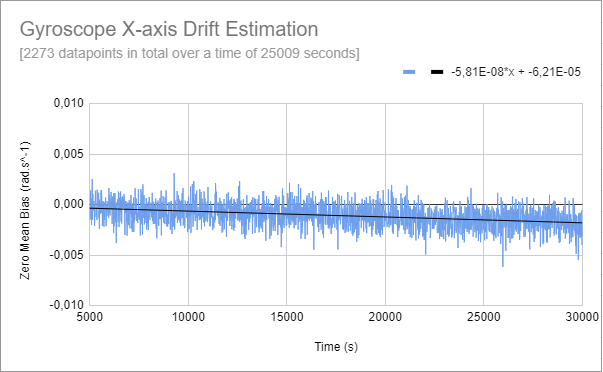 I couldn't find anything to compare them to. Are these values' magnitudes coherent with other sensors ? What would be a more consistent estimation method ?

Browse other questions tagged sensor gyroscope or ask your own question.

0
How can I interface to a capacitive sensor and measure its value with my Netduino?
1
How can I drive and measure the output of a bare ultrasonic parking sensor?