Two slaves on the same I2C bus, both response to address check, one working properly but the other is not

Ok, I will try to keep it as short as possible. 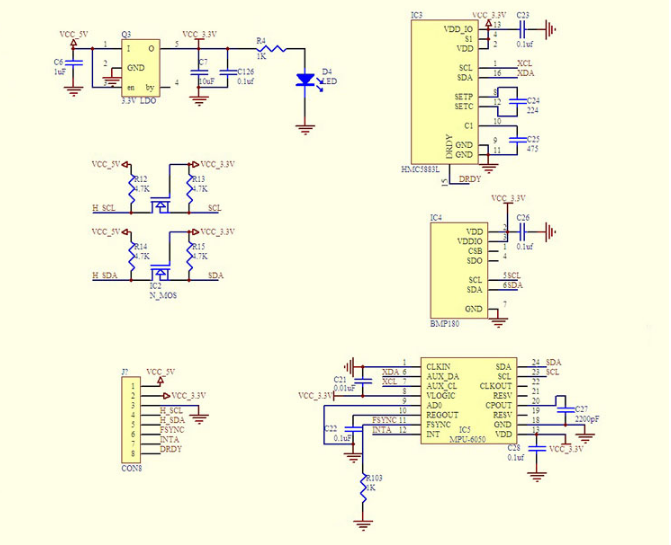 I do also have an Arduino. So, master is Arduino and the slaves are MPU6050 and BMP180.

I have used a premade I2C scan sketch with my Arduino, and the output is:

This is fine, since 0x68 is MPU6050 and 0x77 is BMP180. So, both slaves respond to address check. However, while MPU6050 is fully functional, i.e I can get data from it, BMP180 is not responding. I have used several premade "get BMP180 data Arduino code" from the internet, and none of them worked.

I also have an STM32 MCU, when I use it as master insted of Arduino, same story happens. Despite using the same I2C read/write functions, MPU6050 readings/writings are totally fine, but I cannot write to or read from BMP180. By debugging, I found that AF(acknowledge failure) flag is set when the MCU stucks while trying to write/read BMP180.

I also examined datasheets of both sensors several times, they seem to have the same I2C read/write pattern.

In short, somehow, BMP180 is found on I2C line by the I2C scanner, but data read/write cannot be done. What could be the reason for that? I could assume I somehow dameged BMP180, but it replies to its address. So, I could not understand what is going on. Any idea would be appreciated.

The fact the BMP180 is responding to address check does not indicate it is working properly. Before using the chip, did you check the max voltage allowed on the pins? It looks be a hardware problem. Did you try to use other BMP180?

I have used this exact schematic in my project. It is possible that one of your i2c devices responds to 3V3 and the other one to 5V. I have never ended up using the N_MOS 5V to 3V3 signal converter (not worth it). All devices will work on 3V3 bus with no problem. I highly recommend simplifying the circuit and using the 3V3 only.

Also, make sure you have the right resistors for your microcontroller on the SDA/SCL busses (see SCL_R/SDA_R in picture 2)

Take a look at my schematic: I decided to eliminate the N_MOS'es for both SCL and SDA. 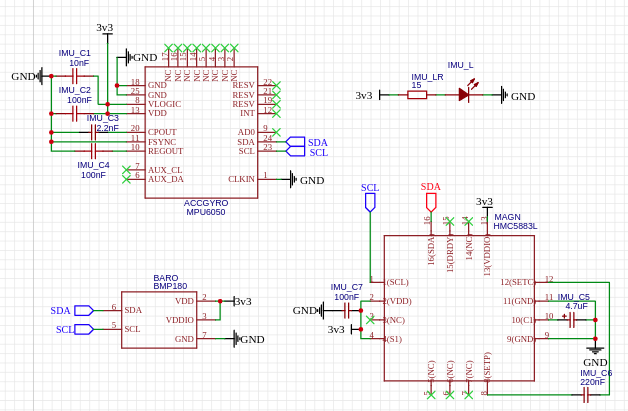 And here is the power supply: 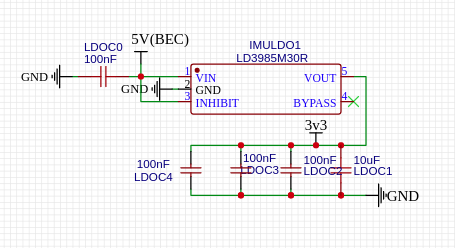 Have a look at my project here: https://easyeda.com/be.mihai22/project-hawk

Btw, here's a demonstration that the drone actually works.

Not the answer you're looking for? Browse other questions tagged sensor i2c communication or ask your own question.

2
I2C combining read and write operation
2
How to connect ATTiny45 to Arduino via serial/spi/i2c and send data?
0
I2C Master communication with a Ten bit slave
3
Latency of reading from a large array of i2c slaves?
1
I2C Write Operation on TCA9539
2
I2C Scanner not working properly
0
I2C setting MCU as both slave and master at the same time
1
Simultaneous reading of multiple I2C devices with the same address
0
STM32F410RB is not outputting the WHOAMI register value of slave MPU9250/6000