I have headset microphone with a rated impedance of 2.2Kohm, that according to the data I've been able to find for it can be powered by 1.5 to 10v. I do not know what the maximum current is, although I have been able to use this mic on a PC to record audio without any problem.

With some experimentation using various bias resistor values, I have found that running 5v across it in series with a resistor of 4.7K tied to vcc seems to produce the best audio signal for that voltage level (filtered through a capacitor to remove the DC) from the microphone's positive terminal. I'd like to use a larger power source, however... specifically, the audio amp that I am wanting to hook it up to takes 12v, and I would ideally like to draw the power for the microphone from the same source as for the amp. I do not, however, want to damage the mic by running more voltage than what it is rated for.

What would I need to change in this configuration to safely hook up the microphone to 12v without risking damage to it, that would yield an optimal signal? I'm reluctant to experiment with different bias resistors as I did with the 5v power supply because while 5v was within the allowed voltage for the mic, 12v is not.

The R terminates the drain inside electret to provide voltage gain and bias near V+/2 near <1 mA .

If you want more range, and also increase voltage gain the sameR may be increased proportionally to get V/2 drop.

You can safely bias the mic to 12v/2 by using TWO resistors in series as a voltage divider; the lower resistor ties to Ground.

The microphone ties to the mid-point of the voltage divider.

Use the microphone as it is now. At 12 Volts with a Zener you can make a 5V power supply for the microphone. The current consumption of the microphone is 0.5mA. It is independent of voltage, a JFET output is actually. 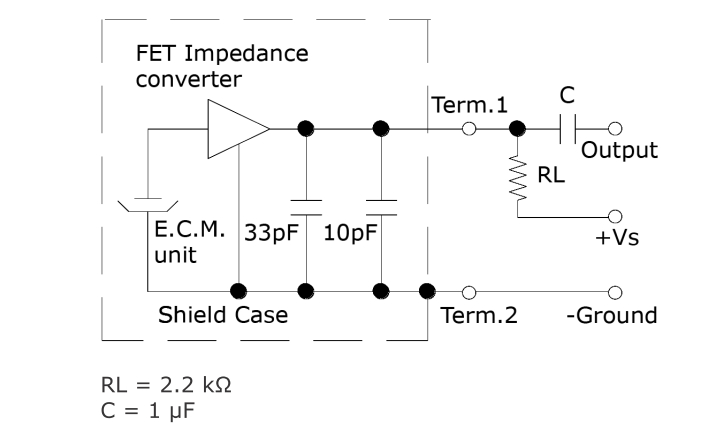 @analogsystemsrf suggests the simplest way to safely maintain the current state at 12V: 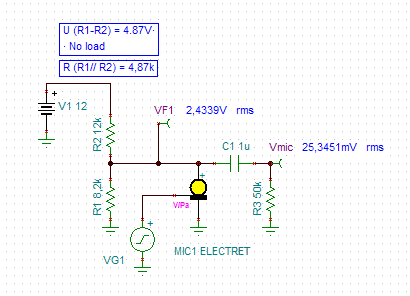 Not the answer you're looking for? Browse other questions tagged resistors microphone bias or ask your own question.