What would be the simplest BJT based *linear* ramp generator?

Let's say I have a 74LS161 based counter, and I want an analog ramp generator which will linearly increase until the ripple-carry-output goes back down (so that the ramp goes up the entire time the counter counts, and at 0 it starts over. Trying to avoid yet another chip and I need all the counter bits to count on the up-slope. And I don't want any other ICs for this, just standard BC548 or so NPN or perhaps BC558 PNP, few of resistors and a capacitor. 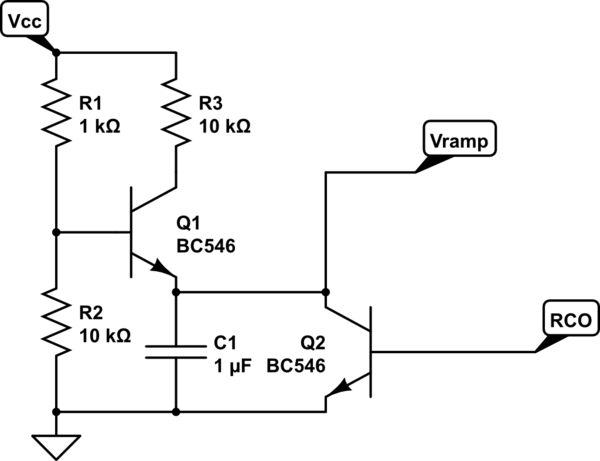 If I do this I see the voltage on the RCO pin break down when it goes high, so I supposed I could add a 220Ω resistor in series to the base of Q2.

I haven't tuned the capacitor yet, at this point I have a 1 nF and it definitely charges too fast. That's why I plan 1 μF next.

But then I still have the problem that even if I can make that work, I activate that discharge transistor Q2 too early since the RCO goes up as soon as the output is all high. I have an inverter stage still from a 74LS04 hex inverter on the same board, so I suppose I could run the RCO through the inverter and then build a positive edge detector with another capacitor which would just pulse long enough to open Q2, and then shut off and stay shut off until the next rising edge of the !RCO signal. 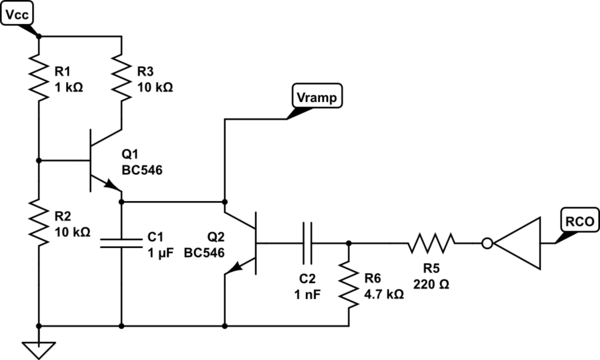 Will it fly with some proper selection of R and C values? Maybe there is even a way to avoid the inverter stage?

UPDATE: I already got a better answer with the PNP transistor, but I have almost made it work with the NPN and just showing the scope tracing for this. I used 4.7 μF and the right kind of slow enough counter stage, to get this:

but indeed, with the PNP and 47 nF I get this on the same counter stage: so that is much better!

What I find difficult is to get it to work on the faster end of the counter. Am already down to C1 = 33 pF and still it's too slow for the 15 kHz that I need it for. I guess I need to reduce R3 to something a lot smaller. Is there a lower limit though? I tried going down 10-fold to R3 = 1 kΩ and while I can get a couple of more counter stages down with that I also have a lot less amplitude.

Replace Q1 with a PNP transistor (collector down) and you'll have a constant(-ish) current source. 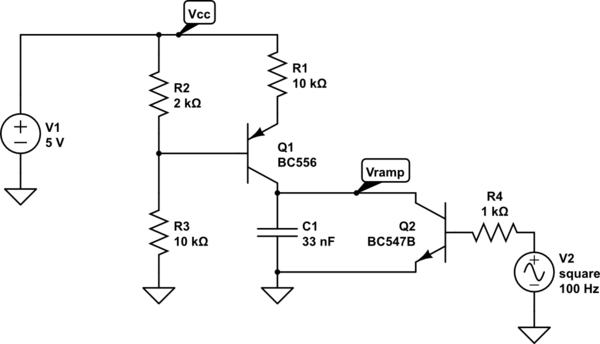 Of course you can make the constant current source temperature compensated and do other things to make it better, but this is the simplest. For best results have a volt or two across my R2, however that limits how high the Vramp can go.

Here is my nearly perfect simple solution. I just need to build it tomorrow.

Spehro Pefhany's PNP correction of course set the stage. However the discharging circuit would be a practical problem driving it from the little poor man's edge detector. But wit the Darlington pair I am doing better than with some exotic N-MOSFET. 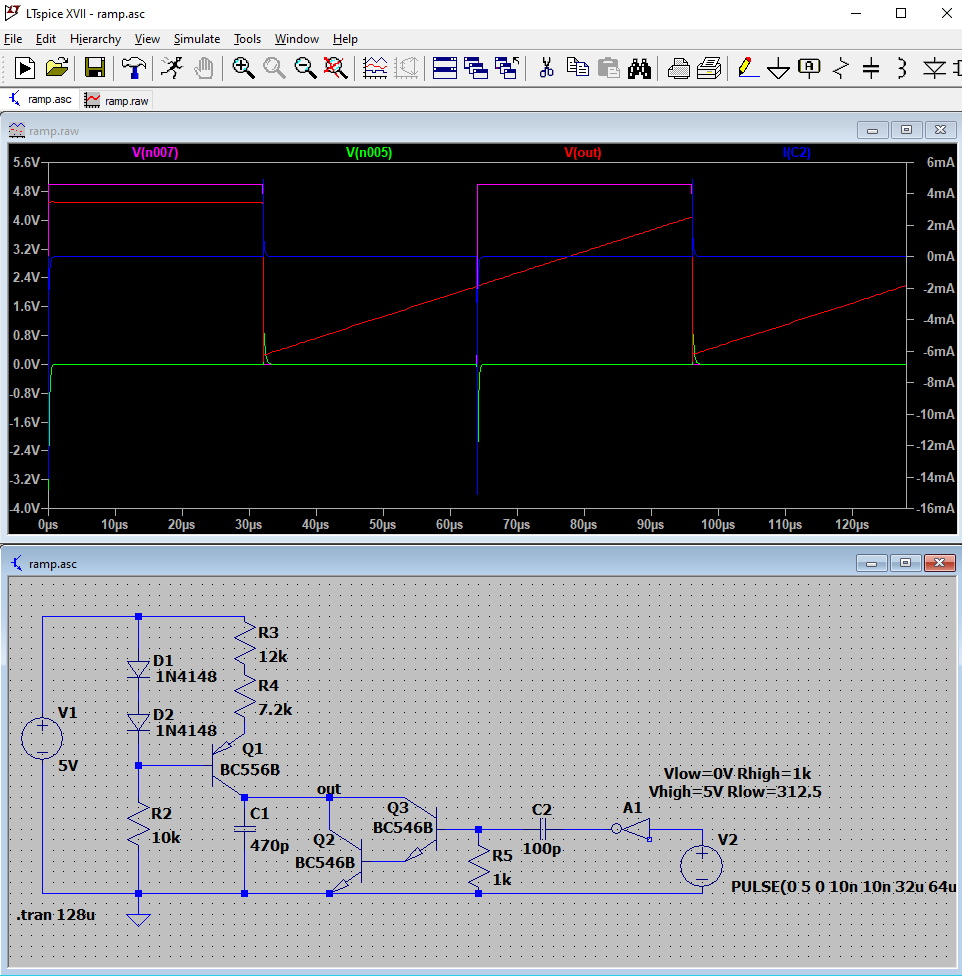 R4 will of course be a 10k potentiometer to adjust.

Replacing R1 with the two diodes is supposed to make it more stable.

UPDATE: There is a difference between theory and practice. In practice the little pulse generated by the 100pF / 1k high pass filter was not enough to set the Darlington pair off. I could run it through a buffer (like an amplifier to bring it to logic level) or two inverters, and then it would work. But that's wasting two 3 inverter stages total. I tried to use a negative edge detection and one inverter to make a full upward pulse, but the negative spike doesn't go low enough to trigger the inverter.

For now I am back at just using the RCO as a reset pulse. And when I do that I don't need a Darlington pair either. I am wasting one pixel doing that. Not ideal but fair enough for the time being.

Final versions I built on breadboard with fairly stable picture.

I tried these diodes D1 D2 on the V-ramp, hoping it would make it stable, but it didn't help, so I went back to the resistor R1 at 2.11 kOhm, I had a 1% tolerance left over from my ladder DAC project. And after I put it all back together it's a pretty stable picture now. 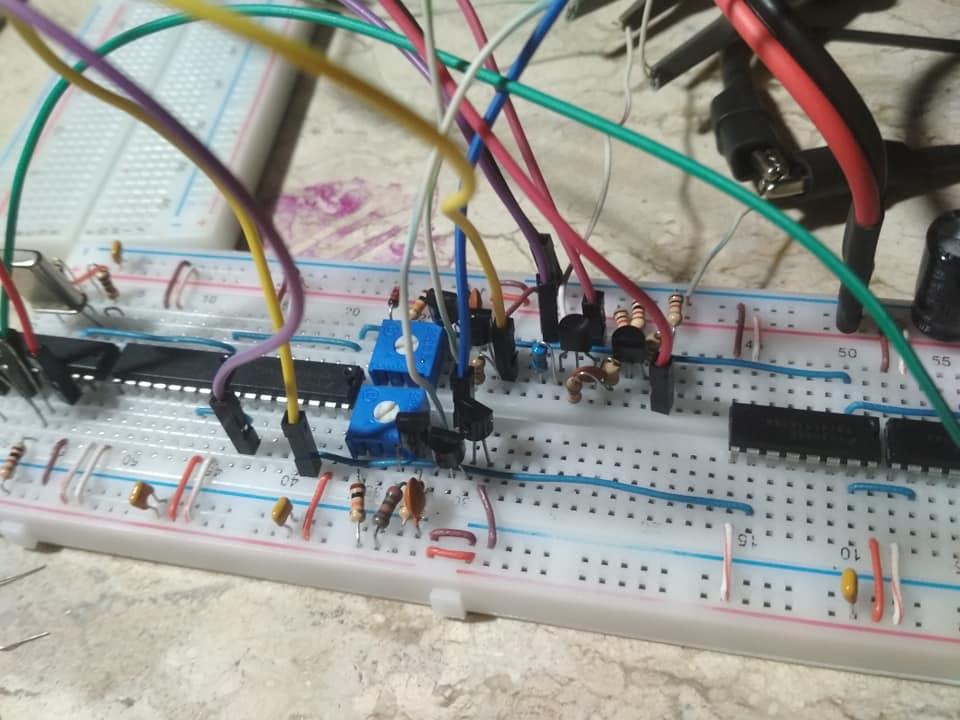 Some fuzz in the vertical ramp, while the horizontal is nice.

And the picture is stable, perhaps the vertical fuzz could be improved. Will see the next few days when it will be swapped out with the digital DAC based staircase ramps. 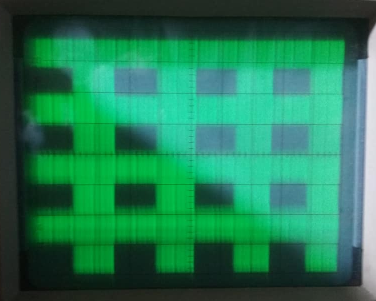 Not the answer you're looking for? Browse other questions tagged ripple-counter sawtooth-waveform ramp-generator or ask your own question.

0
Freq. measurement using pin change interrupt + 4024 counter?
2
Asynchronous Cascaded Counters Problem!
0
My counter for my cpu stack alternates between counting up and down
0
I need diodes to build a R-2R ladder DAC from original TTL chips (not Arduino) don't I?
0
Differences between ripple counter (e.g. 74LS161) and CMOS 4040
0
Miller integrator ramp generator?
2
What can I do to get a stable bias on this current sink?
0
Analog long duration timer (5 minutes) using a ramp