DC1601B Demo board input line caught fire during use

I am using a DC1601B-C buck-boost converter in an automotive circuit to power some various electronics that I have added. It worked fine for a couple months, but under a less-than-normal load of 2.25A (when it should be able to output up to 20A) the input power pin caught fire.

In my circuit I also have a SLD8S17A TVS diode attached between the input power and ground to block the load dump. The diode was still functional after the fire so I don't believe the fire was caused by load dump.

My question is, was I "hot plugging" the converter by having it soldered into my circuit with the load attached before the power was turned on? And a follow up question is what else could have caused the input line to blow/what other protection circuitry am I missing?

As you can see in the photos below, the regulator caught fire only at the input power pin.

How can I prevent the DC1601 demo board from catching on fire? 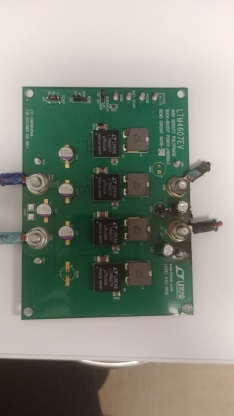 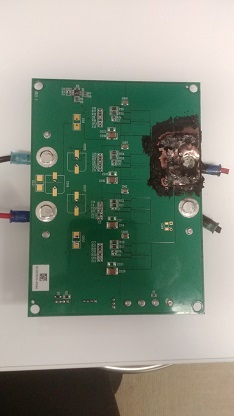 The problem is probably inrush current, and DC to DC converters can source a lot of current. On startup it could pull the upstream power supply down and that would cause it to source even more current. (like if the sourcing supply was lower than 12V, then the boost feature would kick in).

I've had DC DC converters burn up their inputs before, usually it was a transient, the electronics got pulled low briefly which caused the DC DC converter to source even more current. Too much current was pulled through copper and things burn up.

Not the answer you're looking for? Browse other questions tagged voltage-regulator automotive circuit-protection or ask your own question.

0
Automotive protection: TVS, thermistor, or both?

11
Simulating an automotive load dump with a bank of charged capacitors?
0
Will connecting a 78L05 or 79L05 voltage regulator backwards fry it?
2
Should I use two fuses for 220V mains?
3
Bad idea? Powering uC from two separate supplies?
0
Automatic Switching of Power Supply to
0
Detect continuity in AC line during load shedding and take action via DC circuit?
0
What causes a varistor to have low resistance when connected to a board?
0
1117 Regulator outputting 4.2v
0
Why is my TPS62162DSGT regulator burning?