Is there a reason why we don’t supply power to a 2.5 mm or 3.5 mm jack or why it hasn’t evolved to be used it as a wall outlet protocol?

It seems it would use less space, easier to use (can’t insert it incorrectly), and disconnects more easily.

It's possible, and I've seen it done (the gear in question being a wideband amplifier for an EMC probe set), but for isolated low voltage only. The main drawback is the possibility of shorting the plug supplying power as swipes past the outer (ring) conductor. While it might be acceptable for a specialty power input with limited voltage and current, it obviously would be a dealbreaker for line voltage.

For low-voltage it's better to adopt either the barrel type connector, or even better, USB if your device uses 5V. These are commonly available as off-the-shelf types for AC/DC adapters. They're well-known and they don't short out as you plug them in.

But you asked about line voltage too. Let's talk about that and why using a phone 'tip-and-ring' style connector is a spectacularly bad idea.

ADDENDUM: We're not talking about 'phantom power' applications. This is perfectly fine on phone jacks - it's extremely common in fact for microphones and musical instrument pickups. This power is limited in voltage and current so poses no harm as long as it's isolated from the line.

What happens when the tip slides across the other contacts? TRS connectors are not ideal for power delivery because incorrect shorts can happen as the connector is mated.

It has been used for power in the past, but not so much any more, because it has proven to be a bad idea to use one connector for multiple purposes. Imagine the damage when accidentally plugging 12V supply into audio output or microphone input.

That is also the reason why you don't want to use USB connectors for anything else than USB or HDMI connectors for anything else than HDMI. It has been already confusing enough to use 3-pin XLR for line level audio, mic level audio, digital AES/EBU audio, and DMX512 lighting control, and damage is possible when connecting wrong interfaces together, or requiring suitable cabling for proper data transmission even if the connectors are identical.

As other answers have observed, protecting both the power supply end and equipment end during connection and disconnection requires active electronics. The use of quarter-inch jacks originates in a time before silicon devices had been invented, so this simply was not possible. By the time electronics existed and could be put into something portable which would benefit from a remote power supply, there was too much existing equipment to change the de-facto standard.

The quarter-inch jack is actually a remarkably bad connector, technically. The connection surface is relatively small. The connector is physically held in place by the electrical contacts, instead of a separate properly-designed retaining mechanism, which naturally damages the contacts with every bit of side pressure. It easily pulls out - which was actually its original purpose in patch panels, of course, but isn't much use for applications like guitars. And each connector touches the other(s) on the way in, of course, creating problems with shorting on insertion and removal. The only advantages they had were simply that they were cheap, readily available, and standardised enough that quarter-inch jacks and sockets from different manufacturers would work together.

And since the history of the jack connection also uses an unbalanced single-signal-wire cable, everything which uses it is prone to induced noise from other sources. However good your guitar cable is, it is inherently worse in an electrically-noisy environment than even the cheapest balanced cable.

If you do, better alternatives exist

XLR connectors solve basically every one of these problems. The connector is physically robust. The electrical connections are balanced, making it lower noise. Phantom power can be used to drive connected equipment with no risk of shorting other connectors, and the ground pin is longer than the others to ensure it is the first pin connected and the last pin disconnected, making the phantom power connection safe for electronics too.

It does require slightly different wiring to enable the balanced connection. This could be achieved in pickup wiring for a guitar, in theory, but these days it's easier to use electronics.

Line6 Variax guitars use TRS jacks to get the signal out as well as put a power supply in, and historically other custom instruments have done the same too. However you do this, you need a breakout box which connects a power supply in and a signal out to the TRS cable. And this breakout box also has to include protective electronics to ensure shorts between any of the three connections cannot cause damage elsewhere.

Line6 do not do this because it's a good way to do it. They use it because the TRS jack is also backwardly-compatible with regular jack equipment. The guitar switches between external power or onboard batteries, depending on whether external power is there, and that allows the guitar to be connected to a regular amp without the breakout box there.

It would create a fantastically fiery arc fault.

The interior of the socket is too small and delicate. It wouldn't be able to insulate for 120V except under ideal conditions, and the minute those conditions are disturbed, it would strike an arc internally, and would burn and burn until the conductive material was too eroded to continue arcing.

There's a reason we put those pins 1/2" apart. The lodge has an extension cord that had its socket end replaced with a 4" square junction box with metal lid, and a plain recep in there. (I didn't build it; I just scoff at it.) It sits out in the rain. It'll sit in the rain all day, soaked inside and out, not tripping the GFCI breaker. It's amazing.

That goes to show how robustly things are designed. You need a lot of margin for error because so much can go so wrong.

People would plug stuff into it.

Like headphones. Or those male-male 3.5mm cords you use to connect an iPod to a car. They would smoke stuff left, right and center. It'd be a total fiasco.

If you wanted a compact power plug, you would invent a totally new connector.

There's a reason NEMA has like 50 kinds of socket. Every one of them is keyed NOT to plug into any other (except in cases that's specifically allowed: ungrounded into grounded, 15A cords into 20A receps because of NEC 210.21(B)(3), etc.) 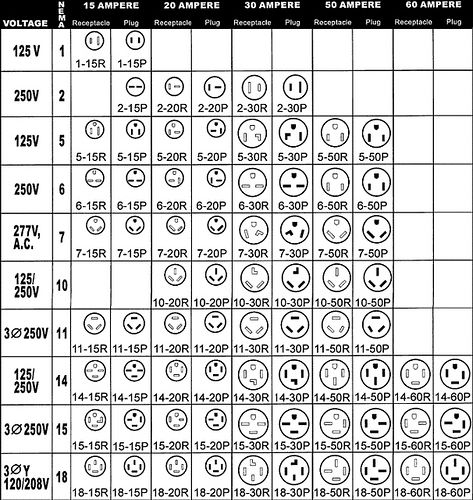 The fundamental problem with the 2.5 and 3.5 mm sizes you ask about is that they are just not big enough to carry the voltage and current levels expected of a wall socket. Even something like a 1/4" jack or a BNC coaxial socket is too small, you need a chunky beast like a C or N type coaxial. But those are a lot more expensive that two-pin mains, so they are not worth it for domestic purposes.

As others have pointed out, there is also the problem of safe disconnection without shorting. Where C and N type are used industrially, it is typically for RF power, which is unsuited to two-pin wiring. Remembering to turn off the power (in at least two places, preferably three) before disconnecting is a safety precaution dinned into all RF power engineers.

Not the answer you're looking for? Browse other questions tagged power connector or ask your own question.

-3
Is there a holy grail of power line connectors and cords?

17
Why does working processors harder use more electrical power?
4
Building a wall-wart style case
0
unexpected power supply behavior
1
How much power (in watts) can I get from my house outlet?
4
Can someone help me to find the right transformer for this power supply?
2
Why is common-mode noise on a power line bad?
0
Why silver plating for 3.5 mm stereo jack
0
What kind of two-pin connector is just a little smaller than jack 3.5?