I have 10A lab PSUs at work of which most don't support sinking current (they shut down on overvoltage). The sinking time I need is typically very short: a few A for less than 1 second, the time it takes to dissipate energy stored in inductive parts of the circuit I'm supplying.

I know I can preload a PSU with the worst-case sinking current, but at 10-20V even a couple of A of preload becomes problematic due to heat dissipation. Another approach I have seen is a big cap on the PSU output capable of absorbing the complete overvoltage peak. The downside is that the cap itself stores quite a lot of energy which makes any shorts in the load much more destructive in spite of the current limitation feature of the PSU.

I came up with the following external add-on for the PSU which seems to do what I want, except that I lose about 0.7V on the diode.

Aside from power dissipation (7W at 10A), the user must keep this voltage drop in mind at all times when setting the output voltage. It wouldn't be a problem for PSUs which support remote sensing, but most basic supplies don't.

Is there a better way of absorbing overvoltage peaks on PSU output?

A possible solution to your surge clamping would be to use a Miller capacitance to clamp the rising voltage, the effective value of the capacitance is the product of the Hfe and the actual capacitance in the rising voltage case, and equal to actual capacitance in the falling case. So for example using a Darlington transistor with Hfe of 1000 and a 100uF capacitor, an effective capacitance of 100,000uF can easily be achieved. Simply add a miller capacitor as below (a), and remove your series diode. The net effect is a RCD clamp (b). As shown , teh current consumption at idle is zero, but the surge suppression starts at an overvoltage of 0.6v, this overvoltage could be reduced by biasing the transistor very gently, with a high value across C.

The circuit can be done as a NPN base, for more choices in transistors (c) , and also with a MOSFET (d) , using a red LED to set up a bias point (select LED color to suit MOSFET Vth)

The above approachs have the side effect of acting as a "handbrake" when winding up the PSU voltage, this can be fixed by using a low drop current sensor to sense PSU current, and charge the capacitor (without any multiplication) , do this with a current mirror arrangement as in (e) (also allows a ground referred current shunt for data acquisition.) or use an off the shelf ZXCT1010 (f) (you can just use a PNP current mirror with 100ohm emitter resistors, will work the same). These circuits work like a bit like a"perfect diode" 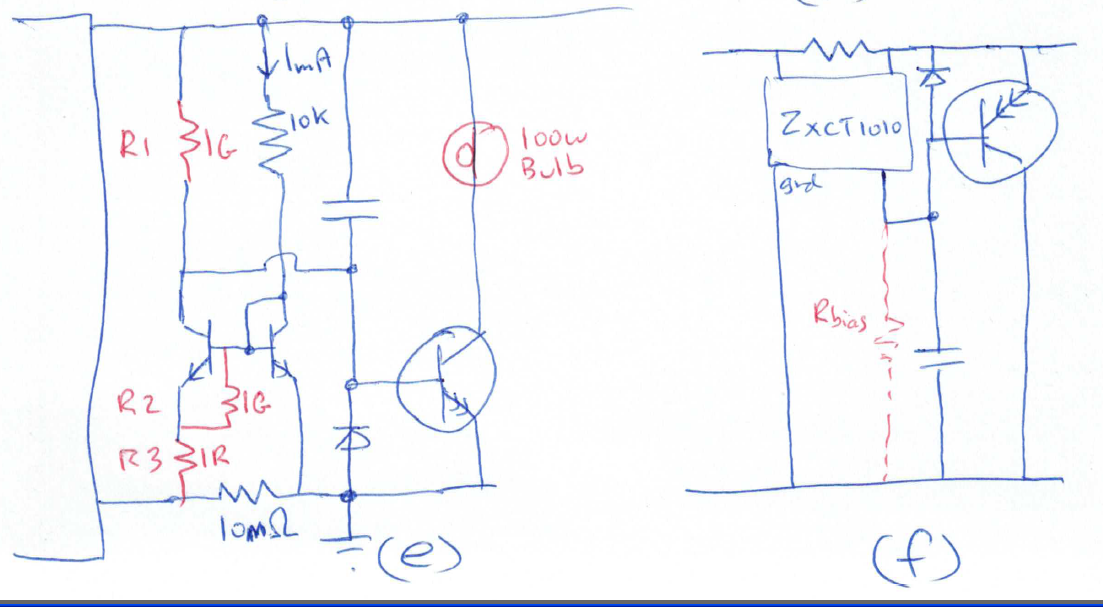 Optional components are shown in red, so you can set up the bias correctly to minimise the surge overvoltage, and set the idling bias current of the big transistor. Put the circuit into a sim, and check the effect of various component changes, R1 = 10k (R3=1R and R2=1G) would be your starting point. Make your power supply a 10v voltage source with 4V PP sine at 1Hz added, and check current in the big transistor. When you build the real circuit, a 12v headlight bulb can be put in the collector leg , this is very low resistance when cold for good surge suppression, but will light up with a long duration current (e.g if something goes wrong with the current mirror). The shunt resistor is typically sized for 100mV drop, the circuit will work if you design e.g. for 50mV drop, but may get a bit more temperature sensitive.

Ok , I've run a sim on version (E) from above , this basically uses a current mirror type current sensor to drive a darlington clamping transistor. It is basically a perfect trans-diode as it senses reverse current (in R4) and operates the transistor (Q1,Q2), so the transistor conducts when current flows one way. The capacitor in the circuit actually makes it work worse, so I have taken it out. I think the capacitive clamp can only work while the voltage is rising , but we really want the clamp to operate before the voltage starts to rise. 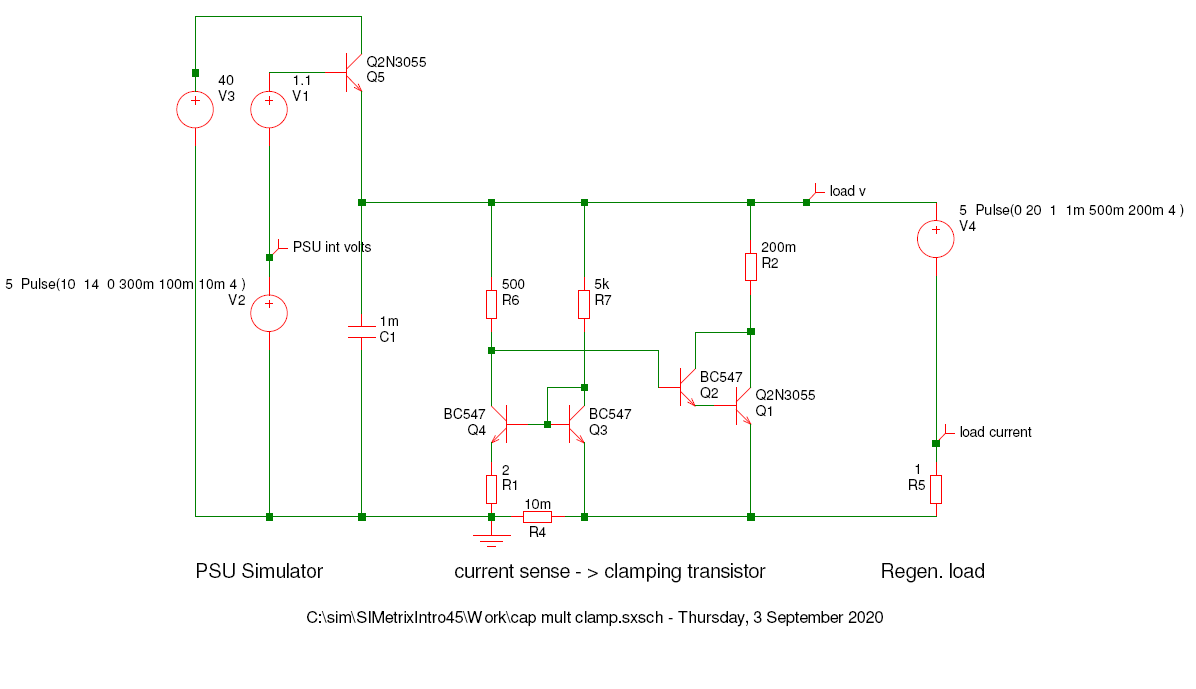 As can be seen, there is a PSU simulation on the left, I have a voltage source V2, and transistor Q5 to simulate the "sourcing only" nature of the PSU. I ramp the PSU voltage up to 12v in the first half second, then wind it back to 10v for the remainder of the sim.

in the middle we have a current mirror style amplifier Q3,Q4 , I have tweaked the collector and emitter resistors R1 and R6 a bit to get about 100mA idling current in the clamping transistor (this gives slightly better performance) the output from the current sensor then goes to the darlington clamping transistor Q1,Q2. (Note: you could use an op-amp (like LM358 or LM7301) instead of the current mirror).

on the right we have the regenerative load , for most of the time the voltage source V4 is set at zero, so the load is just a 1ohm resistor R5, drawing about 10Amp. At one second I switch the voltage source V4 to 20v (for 300mS, then ramp it back again), so the "load" is now driving 10A back towards the PSU. As can be seen this results in about a 1v over-voltage, which should be small enough to not trip the OVP .

Below are the waveforms. Blue is the internal PSU voltage setting, green is the voltage on the positive wire to the load, and red is the voltage across the load resistor R5 (which is also the current, as it is one ohm) 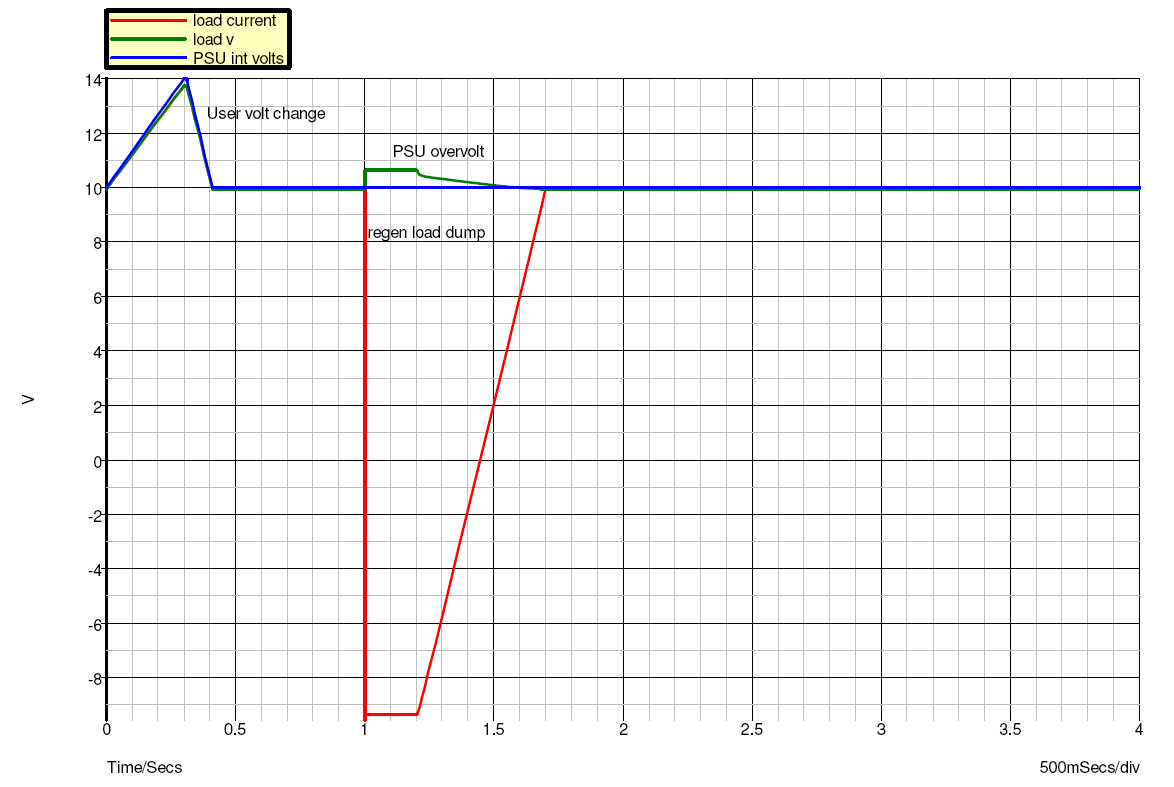 Here's a possible implementation based on an ideal diode, as suggested by @MarcusMüller in the comments:

Not the answer you're looking for? Browse other questions tagged power-supply surge-protection current-sink or ask your own question.