Is there a relation between the voltage of a Li-ion battery and its charge?

I have a Li-Ion battery-powered device (Wemos, an ESP8266 based) and I can read information about the voltage applied to its input.

Is there a relation between this voltage and its remaining charge?

Yes, there is a relationship. As the capacity decreases the voltage will also decrease. However, the relationship is not linear and measuring the cell voltage is not a very accurate way of determining its capacity.

The SOC, State of Charge depends greatly with Voltage under load and no load.

The load voltage drops due to the dielectric-electrode resistance which is high initially then reduces near 3.8V or wherever the curve is flattest. The ESR rises also with temperature dropping and aging charge cycles used.

Thus pulse step load measurements are compared with open circuit or light load (or nearly 0) to get both and compare Voc, Vload with ESR to determine a better result.

I found this for 1 cell but it may differ in C rating and thus ESR value and capacitance Ah ratings from yours using a constant current load ratio of the Capacity/1h or as commonly known the C charge, discharge rating. (not to be confused with the equivalent capacitance value C which is only used by EE’s who understand the more complex equivalent circuit of a battery is many RC values. 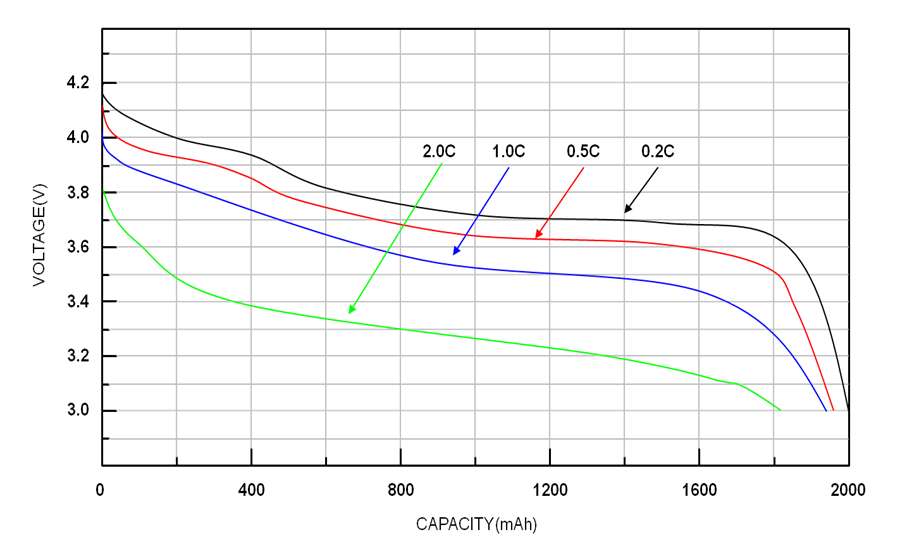 Not the answer you're looking for? Browse other questions tagged batteries lithium-ion discharge or ask your own question.

18
Measure Lithium ion battery voltage (thus remaining capacity)
0
What is the maximum voltage of a Lithium Ion Battery
1
Ratio Between Voltage and Charge
0
Battery Charge and Discharge time for constant voltage charge battery, and how to know if its fully charged
0
Li-Ion battery remaining charge question
2
How do I boost charge a dead 3.7v li-ion battery?
2
Pinout of / how to charge that certain battery (Lithium-ion, 3.7 V, 2 Cells, parallel, 4400 mAh)
2
Calculate the Li-ion battery remaining capacity
0
Dead Battery Voltage and its Charging