Why are VOL and IOL seperately defined in I2C and SMBUS?

What is the point of defining VOL and IOL separately in I2C and SMBUS? 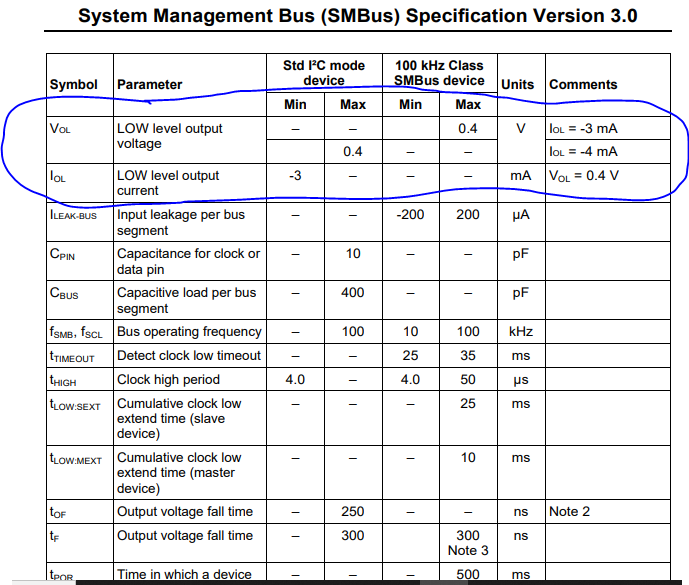 Am assuming these specs refer to bus connections logic levels. Keep in mind that these lines are pulled up to some unknown positive voltage with a pull-up resistor, and are pulled down to ground by a NMOS transistor, or by a NPN bipolar transistor, or possibly even by a very fast switch.
The NMOS transistor might be viewed as a pull-down resistor when turned on. Its resistance varies as its drain voltage on the bus drops, but we're mostly interested in its characteristics when it yanks the bus line low.

Viewing the bus pull-down device as a turned-on resistor this way is a gross simplification - a transistor of any type is non-linear.

That is because while I2C and SMBUS are closely related and the devices are quite interoperable, they still have different electrical specifications, so they can't be listed as one common entry in the specs. It just highlights to the reader that do note that these parameters are different in different standards and it might be important when connecting various chips together.

Not the answer you're looking for? Browse other questions tagged i2c smbus or ask your own question.

-2
Why VOl & IOL are seperately specified in I2C?