The working logic of CMOS inverter 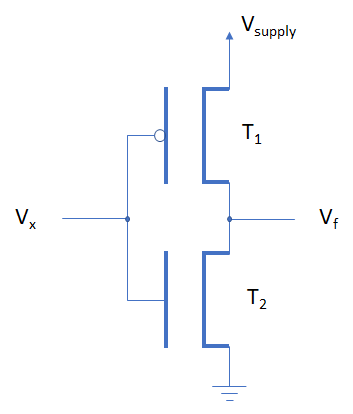 Please be careful when using the LTI equivalent for transistor devices. It makes sense in analog electronics where one may extract rather accurate limits for small signal modelling; OTOH, in digital electronics such approximation can be rather crude and misleading.

When a logic \$V_x = 1\$ is applied to both transistors' gates, T2 has sufficient \$V_{GS}\$ to form a minority inversion channel, whereas T1 won't (MOS will be in accumulation). You can think the channel to electrically connect the Source and Drain terminals: a sort of short between them.

Not the answer you're looking for? Browse other questions tagged inverter cmos or ask your own question.

3
Convert fan-in-2 fan-out-3 NAND gates to FO4
3
Measure the leakage current of a CMOS inverter
1
Why does there have to be a load in MOS inverters?
0
pseudo nmos inverter
0
cmos inverter basic
1
How do CMOS switches behave when Vdd is grounded? What are the alternatives if they behave undesirably?
1
Is it safe to instantaneously discharge 100nF 5V through an HC CMOS gate?
3
Inverter Design - High Side MOSFET Switch-off Issue
1
Why don't pull-up/pulldown resistors prevent microcontroller I/O pins from changing state?