Grinder hums but won't run. Capacitor seems good, and so do windings

My Grandpa gave me a bench grinder recently to fix. He said he was using it a lot, grinding and grinding, then he heard a pop, and it stopped working. Now it just hums, and starting it by hand doesn't work.

There are 2 windings, and a capacitor in series with one of them, I belive it is 6uF. I charged that capacitor up with 32 volts and it seemed ok.

It did discharge kind of quickly, but that's most likely just because it's so small, and the multimeter I was using is discharging it a little. I also put a digital ohm meter across it, and at first, it started at low resistance, and slowly went up, and then it jumped to open circuit and stayed there. I'm guessing that was just because it was a tiny bit charged yet.

I saw somewhere it was supposed to start at 0 and go up and then drop off and go back to 0 and repeat if it's good, and it's not doing that.

But how is that supposed to work? If the ohm meter is applying DC voltage on one side and measuring on the other, shouldn't a good capacitor get open circuit like I did?

There shouldn't be any capacitive coupling across it with a DC voltage.

I also measured the resistance of the windings, and the one with the capacitor measures 38 ohms, while the one without it measures 27 ohms.

Is one of the windings shorted or burned out or will a new capacitor fix it? Thanks!

Edit: I found a cap with the same value in an old fan my dad had lying around, and it didn't work. One of the windings must be shorted. It's probably not worth rewinding, I can buy a new one for $35.

Edit: just took it apart to get to the motor. 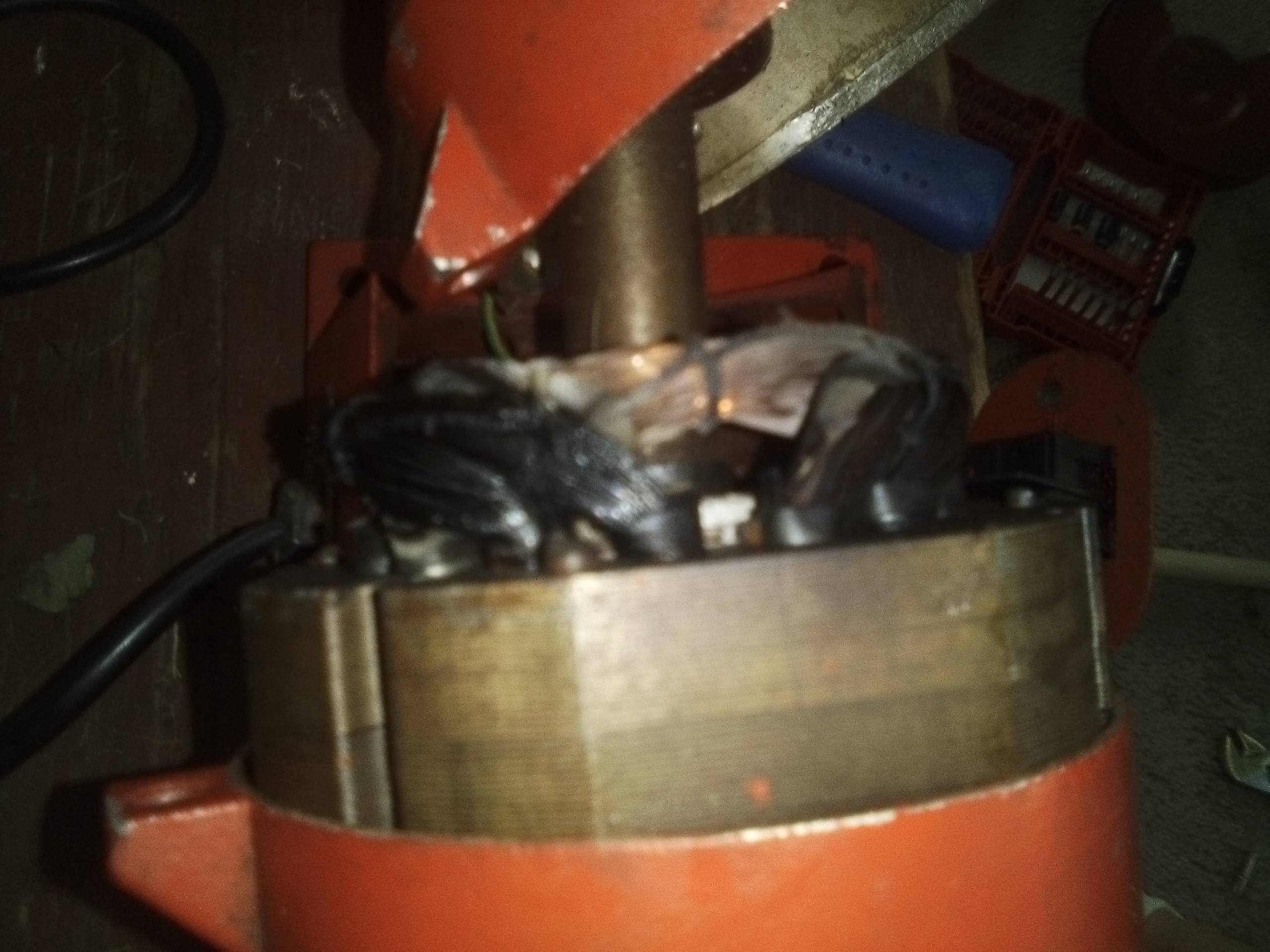 I think the description you "saw somewhere" is something that you are not recalling correctly or is somehow missing some detail. The capacitor tests that you performed seem valid and seem to indicate that the capacitor is ok.

Since the motor hums and won't start manually, it seems likely that a winding is shorted or partially shorted.

Try manual starting with the capacitor and its winding disconnected - only the main winding connected.

You can try removing the capacitor and then starting it by hand.

Some of the cap failure modes (e.g. shorting) may prevent the starting-by-hand magic.

Might also be the centrifugal switch that puts the capacitor in and out of the circuit. Grinders are notorious for causing centrifugal switch failures because the grinding dust gets into them and burns them out. Inside of the motor, on one end or the other, is a little switch wiht a weight system on it. The switch is closed at standstill, connecting the capacitor, then as the motor speeds up, the weights move the switch to an open position and the capacitor is removed from the circuit. If those contacts burn out and never close, the capacitor is not in the circuit and the motor cannot start, it just sits there and hums. People think they can manually spin the motor to test to see if that's the problem, but the motor shaft needs to get to around 80% speed, and on a grinder that is using a 2 pole motor and has grinding wheels on it, you can't even get close manually.

A motor shop will likely charge you more than the grinder is worth to fix it, but since it was free, it might be worth experimenting with disassembling the motor bell ends to get to the switch. But it's not a task for the uninitiated.

Here is a YouTube on this exact issue though. Good luck!

It's possible the capacitor has dropped drastically in value. Other that swapping it out or measuring it with a multimeter on capacitance range etc. it's hard to test it easily.

It's also possible a winding is shorted. Rewinding motors is possible, but unless it's a very good quality grinder it is probably not worth it.

Finally, there is a failure mode on some grinders where the armature spins freely without the power on, but seizes when power is applied because of lateral force on the shaft. You can rule that out by seeing if it spins freely with power applied.

0
Why is the voltage more in case of same polarity during a polarity test of induction motor?
9
Asynchronous motor with motor capacitor sometimes won't run backwards when it should
0
2 Capacitor induction motor Humming troubleshooting
1
Wiring a Crompton Parkinson single phase motor
1
convert capacitor motor to three-phase
5
Capacitor electron flow
3
Is there any way to wind this 4 pole motor to behave as 2 or 8 poles properly?
2
Induction motor current higher at no-load than under load