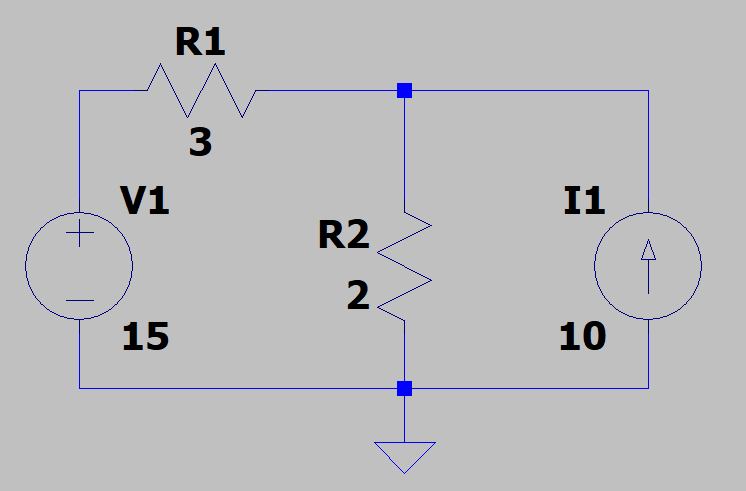 So I setted KCl equation in this way:

The correct result is \$ V_x = 18V\$. And from that voltage I will calculate the currents.

I cannot find the error in my procedure. What am I doing wrong? Thank You

The first problem I see is here:

Keeping track of the sign conventions you choose is one of the trickiest parts of these problems. It might help if you add current arrows indicating the directions to your schematic.

From your method, it seems to me you're more like trying to solve a mystery rather than an electric circuit. It isn't and doing so is just gonna make everything much harder than it really is.

First of all, as a beginner, draw all current and voltage conventions you're employing.

You need to understand that current flow is just an abstraction. Your statement,

I'm assuming that the current i3 is so strong that it is the only one entering the node, while i1 and i2 will leave the node

One doesn't need to need the "strength" of a current to assign its convention: it's arbitrary! So of course, there are choices more convenient than others. Sometimes it's the bipole to suggest one. You won't know whether your conventions were correct until you do all calculations - does a \$-\$ pop up? You assumed something, but it turns out to be the opposite actually.

0
Total Power Absorbed with KVL and KCL
0
Calculating gain of simple op-amp using KCL
1
Circuit analysis with resistance and diode
0
How can find the voltages at 2 nodes with 1 equations and 2 variables?
3
Output impedance of circuit with ideal op amp
3
I can't derive a differential equation from this complex RLC network
2
Trying to solve a circuit containing 2 current sources and 1 voltage source and resistors: what am I doing wrong?
2
Proper way to solve first order circuit with voltage dependent voltage source
0
Circuit analysis - determine the voltage and current on branches
0
Circuit Analysis Problem, KCL Nodal Analysis with Supernode