Hypothesis: Can a double conversion UPS energize a grid-tied micro inverter based solar array during power outage if the UPS input and output are both connected to main panel? 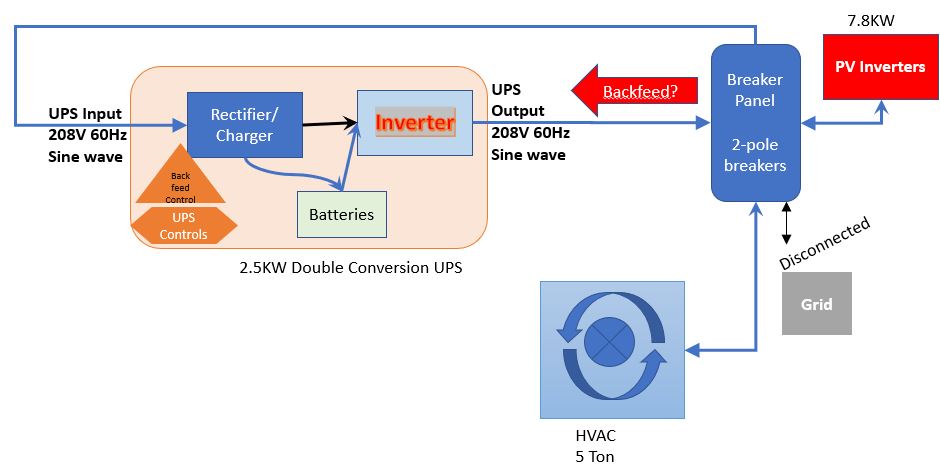 I think the odds of that working are very slim.

The UPS is much smaller than the inverters, so it will struggle to maintain a stable 208V 60Hz. That's especially true if it's not intended to be back-fed.

It will be very difficult to get the load to exactly match the generation. Too much load, and the UPS will shut down, followed immediately after by the inverters. To little load, and the inverters will attempt to push out current into no load.

This has a name

The general topology you are describing with a battery-powered inverter (represented by the double-conversion UPS in your diagram) forming a grid for one or more grid-tied solar inverters is called AC coupling in the solar business, and is used in some multimode (off-grid/grid-tied hybrid) and even perhaps a few off-grid systems. While theoretically feasible, and practical with the correct hardware (vs. what you have), there are some drawbacks to this setup:

However, even with these drawbacks, it can work well enough with existing grid-tied hardware that's new enough to support niceties like frequency-watt control, and also has the advantage that there's no nasty high voltage DC roaming around the system, which eliminates the need for PV-specific arc and ground fault protection. It also permits the use of microinverters, with their attendant module-level array-optimization and rapid-shutdown advantages.

What you'd need if you wanted to do this for real

If you actually wanted an AC-coupled backup setup, you'd need to first decide if you're going to go with an integrated ESS, or an "open architecture" setup using a field-wired battery-bank connected to a multimode inverter. Current generation Powerwalls are the prime example of an integrated ESS; with their compact configuration, high degree of integration, and high power and energy densities, they are an attractive option if equipment space is at a premium or in an environment where field-integrated equipment is frowned upon. However, while the Tesla setups are capable of multimode operation using the Backup Gateway, and some other manufacturers (such as Sonnen) now support similar features, some integrated ESS systems do not provide for this configuration (look for a "backup" or similar mode in the user documentation).

The alternative option is to use what's basically an open architecture system, with a separate battery-inverter rated to UL 1741 in North America or the equivalent local grid code for where you're at in the world, DC-rated switchgear (which while non-trivial to find, is not completely unavailable), individual battery packs/blocks, and a cabinet or rack for said batteries. These systems take up much more space and require more integration work from the installer, as well as a much larger balance of system with fat cabling and high amperage, DC-rated, yet mains-circuit-suitable switching and fusing as they run at 48V DC, but provide a higher degree of customizability, and can work with inexpensive (and highly recyclable!) deep-cycle lead-acid batteries.

Tesla Powerwall essentially does this as explored here.

The crucial takeaway is that a safety approved Gateway component is required, so that when the grid fails, and your UPS takes over as a source of AC to keep the grid tie inverter (GTI) running, the gateway safely isolates your island from the rest of the grid thus (a) protecting the linemen, and (b) not supplying your neighbours with your precious power. The link referred to UK installation, your region will have its own legal requirements.

The second takeaway is the role of frequency in your local island to control charging from the GTI.

Whether this will work with any UPS other than the Powerwall I can't comment.

Not the answer you're looking for? Browse other questions tagged solar-cell inverter ups or ask your own question.

1
Can I connect a Solar Panel to augment my computer's power supply directly to a 12V line?
0
Solar panel system with as minimal reliance on the grid
8
12 Volt from solar panel converted to 120VAC without battery
2
How do grid tied inverters interrupt grid voltage
1
how to design a microgrid
1
Can grid-tie inverters charge UPS batteries if connected to the UPS output?
2
Floating DC power supply (solar panels) - do I need double-pole breakers and why?
3
How does a grid-tie solar power inverter know when the mains power has failed?