Source of initial magnetic field in an alternator

I have been reading about how alternators work and I am wondering where the initial magnetic field comes from when no current is running through the field coils that excite the magnetic field in the rotor. I have found alternators that are using a permanent magnet, where it seems obvious and alternators that apparently do not seem to be using permanent magnets, where it is not clear to me. I can also find on the wikipedia article about excitation that there are such generators:

The magnetic field may be produced by permanent magnets or by field coils.

The initial field excitation, in an automotive alternator, is provided by the battery. 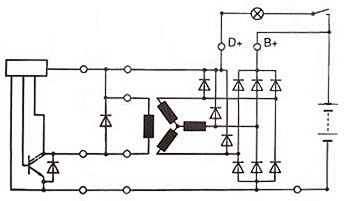 In an automotive alternator, AC output from the star-connected 3-phase winding is rectified by a 3-phase full-wave bridge rectifier, to charge the battery through terminal B+.

The same AC output is also rectified by a 3-phase half-wave rectifier, to supply excitation current to the field winding. The regulator maintains the alternator's output voltage within permissible limits by switching on the field current at the lower limit and switching it off at the upper limit.

When the engine starts and the alternator is driven, the external excitation induces armature current. As the speed increases and the B+ and D+ voltages take over the battery voltage, the ignition light goes out.

The ignition light remaining on, indicates that the alternator is faulty.

In an automobile, obviously the initial field current can come from the battery. But even without that, there is often enough "residual" magnetism in the ferrous parts of the alternator to "bootstrap" the process.

Since the RPM is proportional to the voltage it can create the field current is used to control the current instead by mutual coupling if the stator to the rotor and voltage integrated by the large battery capacitance after the alternator 3 phase rectifier. Since the Alternator must be able to charge the battery at idle near 700 RPM, in theory it could generate 10x the voltage at max RPM but impossible due to load effects of the battery.

Thus you can consider the alternator as being an amplifier of field current regulated by feedback with a 14.2V limiter and have sufficient gain to achieve max power in the kW range at some low RPM such as 1200 RPM.

You might imagine the field flux as a magnetic clutch that affects torque load with field current to meet the load current which has a linear relationship with output torque load and electrical current load.

You could run an alternator without a battery but use a ultracap to smoothen the ripple (but RC>>1/f) and thus the field windings have a current source to couple the rotor and amplify the current.

Some snowmobiles use this method.

This solves the cold temp battery issues for some snowmobiles.

You might wonder... what current gain does a good alternator need ?

Not the answer you're looking for? Browse other questions tagged ac generator or ask your own question.

1
Alternator without permanent magnets and without external power source

5
Will a 3 phase induction generator fight its own rotation?
2
Moving the magnetic field around a fixed conductor?
0
How to control the output voltage for the different types of the DC generator?
0
Is my rotor/stator configuration correct?
1
Synchronous generator induced EMF
1
Alternator without permanent magnets and without external power source