Why does the current in a transformer's primary coil change when a load is attached to the secondary coil?

I don't really know if the question is suitable to be submitted here or in the Physics StackExchange. The problem is I don't quite understand this sentence from "Practical Electronics for Inventors" Book, p.377

The explanation says that when a load is attached to the secondary, the current in the primary must change to keep the applied voltage field the same. I have no idea what that means and why does this phenomenon have to occur in the primary, when there is a load in the secondary.

I need some more in-depth explanation. I have quite good background in physics of electricity from first year of engineering college, so feel free to give a deep explanation about what is happening.

If you connect a nominal voltage to primary, then a magnetizing current starts to flow, which has a 90 degrees shift. Now, we could say that the nominal magnetic flux is present and the secondary voltage equals to primary with regard to transfer ratio Np:Ns.

Once you load the secondary, the current would cause otherwise to increase the magnetic flux but this is not going to happen, since the primary current also increases and cancels that extra flux.

I have no idea what that means and why does this phenomenon have to occur in the primary, when there is a load in the secondary.

Me neither, but it's the way it works. You will hardly find any human readable explanation on that even if you are a doc.

If the transformer is nominally loaded then we could say that this magnetizing current is very small compared to total primary current, but it is held constant regardless of the load current. If the secondary is unloaded, then this is the only current.

While beginning a study on a transformer, it is simpler that you imagine that primary, secondary, tertiary, ... voltages are induced due to magnetic flux change, and that flux is a cosine wave The voltages are all sine waves and perfectly in phase.

Next step is to add the magnetization current, this is taken from point of energy transfer, which not necessarily means that you have only one primary winding.

A more basic physics explanation is simply that conservation of energy holds*, and you can only stuff so much energy into the magnetic field of a transformer.

You can do an amazing amount of power electronics design just by remembering that conservation of energy holds, BTW. Power in = power out. Motors, generators, power supplies -- they all obey.

* On any human scale. Shortly after you could build even a solar-system scale perpetual motion machine, you'd be ripped apart by runaway expansion of the universe. But that would be after every proton in the universe has evaporated into photons. So -- just take it that conservation of energy holds.

If the secondary didn't do this, consider what might happen. Let's say the "net" field increased. If it increased then there would be more induced voltage in the secondary and the secondary current would increase and thus you have a vicious spiral ending in the universe collapsing (or something like that).

Say that the "net" field reduced, what would be the effect - if the field reduced then the secondary voltage would fall and there would be less secondary current and that means the field must restore. Do you see the problem?

For the induced voltage in the primary to equal the applied voltage, the original field must be maintained. The primary must draw enough additional current to set up a field exactly equal and opposite to the field set up by the secondary current.

The magnetization current can be any value without affecting transformer action. Clearly though, large mag current is undesirable for several reasons.

I need some more in-depth explanation.

This is a question and answer site and isn't geared-up for pages of explanation on request or otherwise but, maybe this picture will help: - 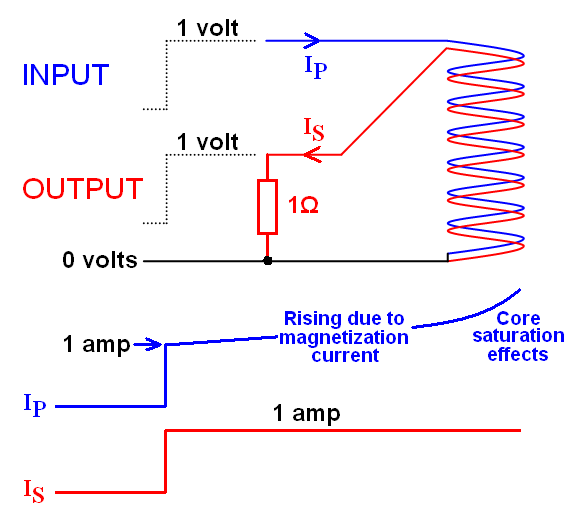 Because \$I_P\$ and \$I_S\$ have to be in opposition then the load-orientated fluxes must cancel.

When the secondary solenoid subjects to input flux, the opposing current sets in the solenoid to produce the reverse magnetic flux in order to balance the flux caused in it by primary winding. (Lenz law and Faraday explanation.)

This balance keeps on untilthe load is subjected to secondary and draws current from it .

This drawn current tends to lower the voltage of secondary by I X R = V.

This dis-balances the equilibrium between primary flux and secondary flux.

Now more flux is drawn into the secondary because of its lowered opposition which in turn draws current into the primary from the main supply.

This all continues until the new current in the secondary is set which is necessary to form new opposing flux and the new balance between secondary and primary flux.

Secondary becomes the 'primary' of the first when it generates the equal and opposite symmetrical field under load as per Lenz's law. When current is drawn, emf is generated in the primary which adds to the input voltage. V/L=di/dt More voltage means increase in current.

Not the answer you're looking for? Browse other questions tagged transformer inductor magnetic-flux or ask your own question.