Understanding the working of an MPPT solar charger

I am trying to understand the working of an MPPT charger for a Li-po battery (3.7 V nominal) and a 6 V, 2 W solar ‎panel so that I can select the right charger for my project.

After searching and reading a lot of related material on the net, my understanding is that, while charging, in all light conditions, the voltage from the solar panel will remain ‎more or less constant, but the available current will change. Thus at the input side of the charger we are ‎getting more or less the same voltage but varying current as the light changes.

But as the light condition changes, the available current from the panel changes, and so does the MPP ‎‎(maximum power point), and the charger adjust the output voltage to the MPP voltage (to get most ‎of available power for charging). But still this voltage will be higher than the battery voltage.‎

Please correct me if I am wrong.‎

A solar panel is not a voltage source (the voltage does not "remain more or less constant"); it is a current source over most of its I/V characteristic. The voltage it shows is "set" by what you connect to it.

The idea of an MPPT is to keep the panel producing maximum power under all circumstances. The MPP is where V·I is maximal, or the maximum rectangular area that will fit under the panel's I/V characteristic, about 10 W in this example: 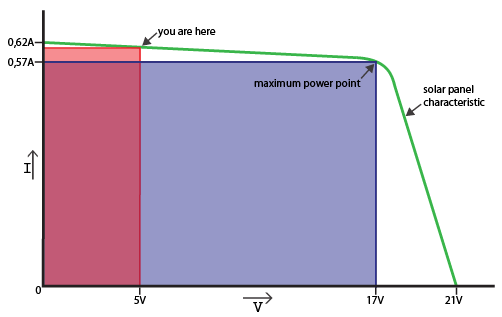 Suppose you connect a 5 V output DC/DC converter to a solar panel. It would work fine, but it would set its input impedance (by varying the PWM) to a point that doesn't use the full power of the solar panel (the "you are here" point), only about 3 W of the available 10 W.

A simpler (but less efficient) way is setting a fixed point on or near the MPP, say 16 V, and reduce the input current of the DC/DC converter (by varying its input impedance by varying the PWM) when the panel voltage drops below that 16 V. This method if often used these days for small applications. It works fairly well because the MPP voltage doesn't change much across lighting conditions.

In both methods, the input of the DC/DC converter is regulated, not its output, the output behaving roughly like a current source.

The charger is a separate part of the system, and has its own regulation for correctly charging your batteries, using the output of the DC/DC converter.

MPPT and battery charging are 2 separate control laws, and operate independently, although will have some interactions. Explained below.

This optimum power point is going to depend on how much light is hitting the solar panel as well as the characteristics of the panel itself. When it is brighter the optimum power point will allow the controller to draw more current at a higher voltage while maximizing the available power output. When it is less bright the controller will need to reduce the amount of current it draws to extract maximum available power, otherwise the solar panel voltage will drop and power will reduce below what is available.

Battery charging is a separate control domain from MPPT. Lithium battery charging starts with a constant current charge, naturally the voltage will be a little higher than the existing battery voltage, but LiPo's have low internal resistance so voltage control is not going to work for the initial charge stage - a constant voltage at this stage would have short circuit effect, i.e. very high uncontrolled currents.

Once the battery reaches charge voltage the charger will then change to fixed voltage mode where it will hold the battery voltage at the charge level of (typically) 4.2V. It will remain in this mode until the current reduces to near zero.

Obviously there is going to be some interaction between the MPPT control and the battery charging control. In the initial stages of charging the MPPT control will dictate the power level which in turn will determine how much current the charger delivers to the battery. But the charger will need to adjust for the charge voltage, a higher charge voltage means less current when drawing the same power. In the later stages of charge, the battery charge control will dictate the power level and the amount of power drawn from the solar panel will reduce.

To achieve current control and manage the differing voltage levels, a switch-mode DC-DC type converter circuit would be used, one either side of the DC-link. Whether these are buck, boost or buck-boost circuits will depend on the designed voltage ranges for solar input and battery output. I would guess it would probably need a buck-boost converter for the solar input to create a stable DC-link voltage, and then a buck converter for the battery charger.

EDIT comment on solar panel I/V curve The relationship between the current and voltage for a given light level is not linear, see diagram in other answer. However, before the MPP (maximum power point) on the I/V curve, the current reaches a maximum and stays almost constant (constant current source behaviour). But, beyond the MPP the voltage stays almost constant until it reaches a maximum at 0 current (constant voltage behaviour). So it behaves as constant current source, but also constant voltage source and everything in between depending on the I/V point.

Your line of thinking is correct. Think of current changes in terms of a cloudy day. Using a 12V solar panel, you will get the output voltage between 12.6 (very cloudy) to about 13.5 (very sunny). The current between these voltage variations also varies. MPPT solar chargers are supposed to be more efficient than PWM as you might have read already. MPPT are about 8-12% more efficient.

The solar charger regulates the voltage in accordance with the amount of charge the batteries have obtained while charging. A fully charged battery will be at 13.4V for a 12V lead acid battery whereas for 6V battery, it might be around 7.2V.

I think that is 100 percent correct. Technically, the charge controller will adjust itself to extract maximum available power from the panel.

If the input voltage needs to change, the controller will change it.

But the nature of the solar panel is that MPPT voltage only changes a little bit with changing light conditions. So that is why the solar panel voltage will stay the same.

In fact, the way the charge controller probably works is by changing its duty cycle (it will be a buck converter) up and down and watching to see what effect it has on the battery charge current. It will always keep the duty cycle at the value that produces maximum charge current. And this will also result in the solar panel output voltage being relatively constant.

Note that depending on the battery state of charge, the battery may not be able to accept the maximum power available. If that happens, then the controller will no longer perform maximum power point tracking. Instead, it will extract just enough power to charge the battery according to the charge algorithm.

4
How does an MPPT charge controller control the input voltage?
1
Solar panel to USB conversion