With respect to how to reduce the effect of ground currents on sensitive analog portions of a circuit, Art of Electronics (3rd Edition) chapter 8 includes this suggestion: 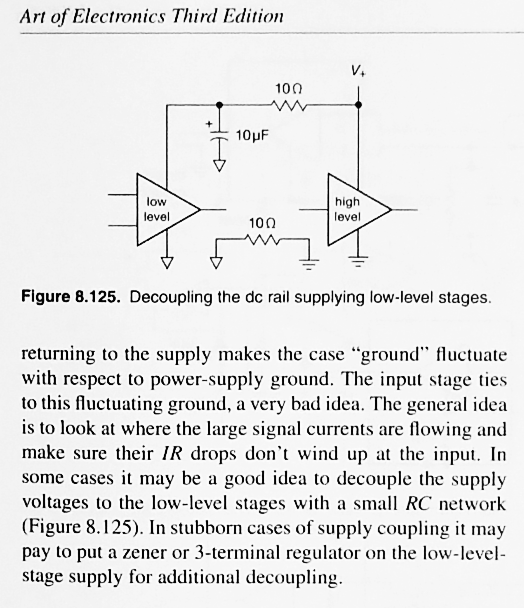 My question: what is the purpose and effect of the 10 ohm resistor connecting the two grounds?

I understand how this allows the low-level section's ground to float a little separately from the high-level ground, which might come about if the two sections were each attached to different external systems (not shown in the diagram), each with their own disparate grounds, while still allowing the high and low level sections to receive power from the same PSU.

However usually the low-level section will need to communicate signals to the high level section (or vice versa), and, for those signals, any current in the 10 ohm ground resistor produces a voltage that adds unwantedly to the analog signals between the two sections. After all, this excerpt follows a discussion of reducing the impedance of ground networks (along with deliberately designing the current paths) for just that reason, not increasing them.

For example, the 10 ohm resistors in the positive and negative rails will split the voltage drop attributable to the current consumption of the low-level section, thereby adding that half amount to any signals from one section to the other. That's already an issue, and made worse if that current consumption fluctuates (more of a problem at low frequency, since higher frequencies are absorbed by the reservoir capacitor.)

No doubt there are techniques that ameliorate the mentioned problem, such as communication between the two sections using an analog optocoupler or differential signals. But for plain old individual analog signals, I'm at a loss to understand how that 10-ohm ground resistor helps, or in what scenarios, compared to a zero resistance connection.

A lock-in amplifier accept extremely small input signals, often below thermal noise levels. Groundloop currents can be a dominant noise source.
A low-noise JFET preamplifier and its BNC front panel input jack are isolated from ground with a small resistor of about 10 ohms. Ground-loop currents on input coax cables must flow through this 10-ohm resistor. The resistance is far larger than coax shield (braid) resistance.
Ground currents develop a voltage across the 10 ohm resistor, while those same ground currents develop a much smaller voltage along the coax braid. The preamp rejects the voltage across the 10-ohm resistor, but must cope with the much smaller voltage drop along coax braid. 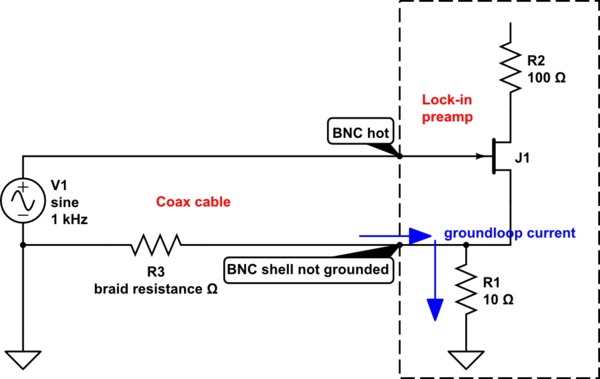 Not the answer you're looking for? Browse other questions tagged noise grounding or ask your own question.