Why does reflection coefficient phase depend on position along a T line?

I'm in an intro electromagnetics class. It makes sense to me that reflection coefficient at the load has an imaginary component, because I am thinking of it like "the reflected wave is some percentage of the amplitude of the incident wave, and it's shifted by some constant phase shift".

However I cannot understand why reflection coefficient along the T-line (i.e. reflection coefficient as a function of distance) has a changing phase angle. I'm thinking if you freeze-frame a T line at some moment in time and look at the voltage across the length of the T line, the reflected wave and the incident wave may be offset, but the offset will be the same for the entire length of the T line, because the two waves have the same frequency. I graphed this to hopefully help explain my line of thinking. 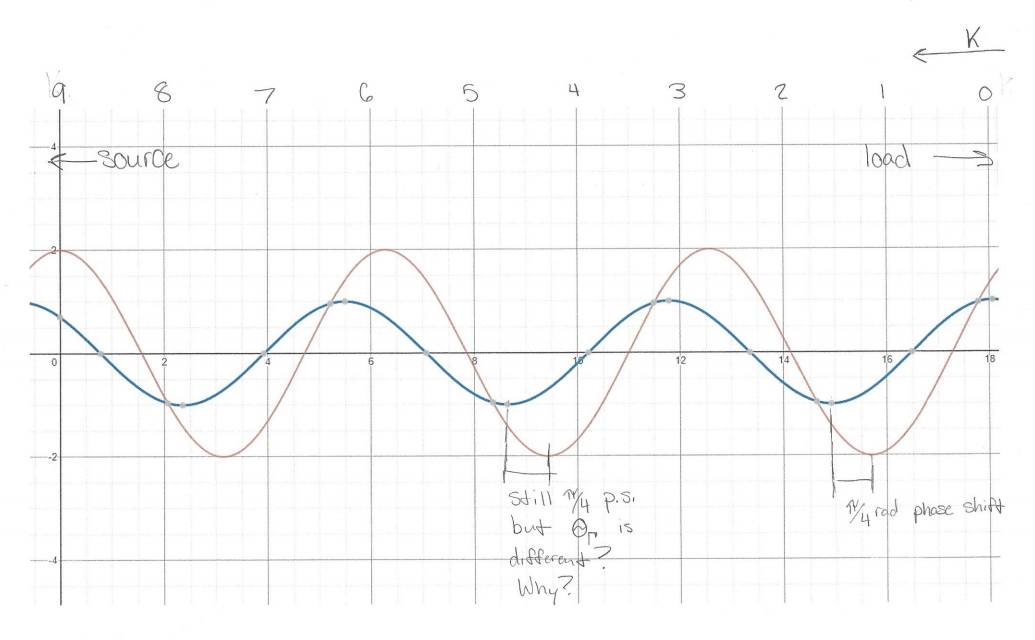 So why does the angle of the reflection coefficient depend on where you are on the T line? I would love a graphical explanation, I feel like I am getting caught in the math and not understanding what is really going on.

So why does the angle of the reflection coefficient depend on where you are on the T line?

Because the reflected wave is still produced at the same location (call it x = 0), and then travels back to wherever you're measuring the reflection. As it travels, it accumulates phase.

Because waves have a length to them and physically move through the medium. In an ideal feedline you would have 360 degrees of phase for every wavelength of distance (since it will go through a full cycle in that space). If it helps try to visualize water waves. If a water wave is coming towards you and you happen to be at the peak of the wave at the ocean and you look ahead you will see the trough of the wave half a wavelength in front of you. So to someone half a wavelength in front of you in the ocean they would be at the part of the same wave that is 180 degrees phase difference from yourself. It is no different from a feedline.

One thing that is very important to say here is that the way you are measuring the phase difference on the diagram you posted is completely incorrect. You are treating it as if it would be waves on an oscilloscope screen. The diagram has physical space as the x dimension with the waves moving in the opposite directions, so the way you went about it is no longer valid. Now if the waves were both moving in the same direction then the way you are indicating phase on there would be correct, but they are not. Think about it, because they are moving in opposite directions the two peaks you have labeled would be moving away from each other, as such if you measured it that way the values would constantly be changing from one moment to another cycling through 0 degrees to 360 degrees over and over again. The reflection coefficient, however, is a fixed value that wont change so long as the two waves remain consistent.

It is important to understand that because these waves are moving in opposite directions it makes no sense to say the waves as a whole are in phase or out phase in this context. The phase relationship only matters at specific points, and is different at every point.

Here is an image of the actual waves in motion that might make this clearly.

Not the answer you're looking for? Browse other questions tagged electromagnetism transmission-line or ask your own question.

2
Meaning of reflection coefficient in English