Why most particle accelerators used vacuum diodes instead of transistors?

HERMES III (High Energy Radiaton Megavolt Electron Source) at the Sandia at Sandia National Laboratories is the world's most powerful gamma ray generator. HERMES-III produces a highly energetic beam that tests the capability of electronics to survive a burst of radiation that approximates the output of a nuclear weapon. It used a field emission diode, instead of a transistor.

I wonder why most accelerators used vacuum diodes instead of transistors. Transistors are much smaller. What are the reasons?

I started this answer on the second question you asked on this subject, and moved it here when the other question was closed. I've tried to make it address both questions.

The machines you are looking at use the bremsstrahlung effect to generate short wavelength electromagnetic waves.

The X-rays and gamma rays are generated inside the field emission diode you mention.

The field emission diode in the particle accelerator is basically an enormous vacuum tube diode, with the plate replaced with a very hard and dense metal.

It generates electromagnetic waves via the bremsstrahlung effect. Electrons are accelerated to stupidly high velocities and slammed into the hard plate at the end of the tube.

Bremsstrahlung is generated by braking (slowing down) a charged particle.

The word "Bremsstrahlung" is German. It is composed from two words:

The velocity of the charged particle (electrons) dictates the amount of energy available, which also dictates the wavelength of the generated electromagnetic waves.

In a semiconductor, electrons move at the drift velocity of the semiconductor material. This is very slow, on the order of meters per second or less.

The low speed makes it very unlikely for any high frequency (short wavelength) waves to be generated.

In vacuum tubes, electrons can be accelerated to very high speeds.

The very high velocities of the electrons in a vacuum tube makes it very likely that short wavelength electromagnetic waves (X-rays) will be produced if the electrons are braked by a suitable material (tungsten is used because it is dense enough to brake the electrons efficiently and hard enough not to be eroded by the heat caused by the electron collisions.)

Note that the electron velocities of that plot are in tens of thousands of kilometers per second. They are reaching a significant portion of the speed of light.

In summary, you use vacuum tube diodes because they can accelerate electrons to high velocities and slam them into a metal plate.

Semiconductors can't be used because they don't accelerate electrons to the velocity needed, and don't have any place to "slam" the electrons.

Bremsstrahlung generates a wide spectrum of wavelengths. The peak in the spectrum depends on the electron velocity.

At low speeds, the peak is at longer wavelengths - but it is statistically possible that a high energy photon (X-ray) could be released. The incidence of such photons would be too low to make a useful (or even detectable) X-ray source.

The correlation of MV (or MeV) in HERMES III (High Energy Radiaton Megavolt Electron Source) to diodes or transistors is not appropriate.

The use of diode in the HERMES III Diode implies an anode and cathode, but it does not imply scale. Helps to understand what is happening, but has led to your confusion.

From History of HERMES III Diode to Z-Pinch Breakthrough and Beyond by Thomas Sanford. 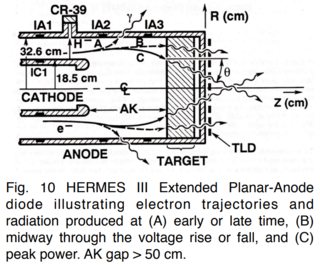 Estimates indicated that HERMES III (Fig. 9) needed to produce a ~20-MeV electron beam at the target on the order of ~700-kA in ~20 ns to produce the desired radiation dose rate of ~5 Trad/s over a useful area of 500 cm2. These electrical and radiation parameters became the HERMES III design goals.

An artists rendition of the Hermes III (Referenced Fig 9). Notice the two people in front of the model. 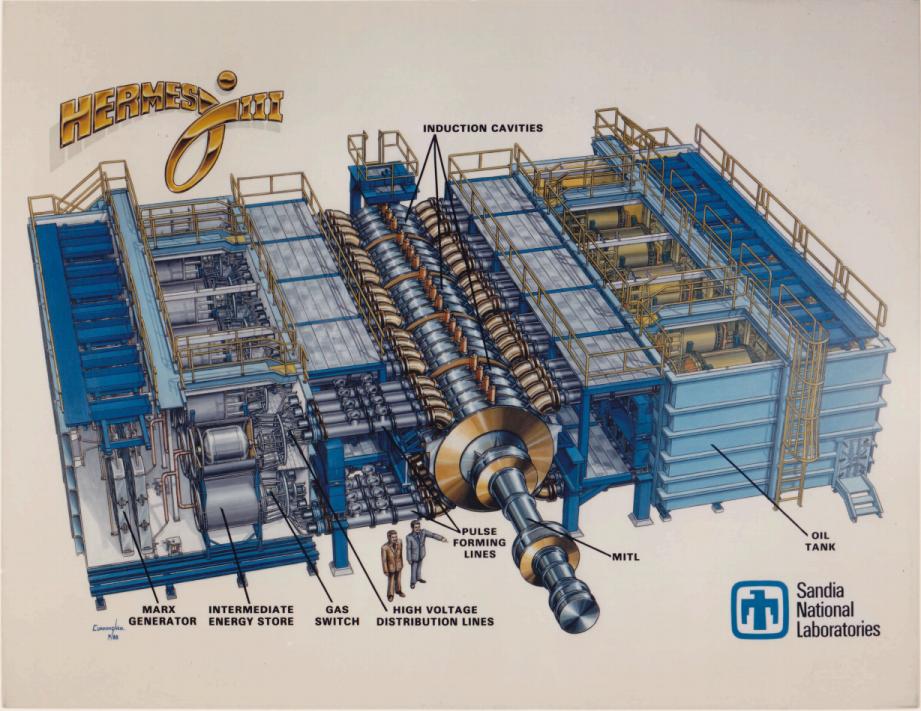 "Diode designs are needed that efficiently convert electrical energy to gamma..-ray energy and that distribute that gamma-ray energy uniformly over a large area"

For gamma ray production, semiconductors are useless. How is that even supposed to work?

Not the answer you're looking for? Browse other questions tagged transistors diodes vacuum-tube solid-state-devices or ask your own question.