How to keep heat away from an electronics enclosure?

I’m converting a simple cooking hot plate to have it’s temperature controlled by an arduino, with an lcd.

It’s metallic casing gets really hot when the plate is turned on.

As I’ll remove the original analog temperature control and use an arduino and thermocouples to control the heat, even I I had space under the heat element, I think it would toast the electronics pcbs and lcd.

So I’m thinking of using an external enclosure to put the arduino, lcd, rotary dial and sensors connections.

But I want to keep this enclosure attached to the metal frame of the cooking hot plate, not hanging around with cables.

Is there a material to isolate the heat from the metal case from the hot plate to an external attached enclosure, so the circuitry will be in an “acceptable” temperature? Something to be put between the metal frame and the enclosure? Silicone rubber?

I don’t have the enclosure yet. A plastic one would be easier to make holes, but it can be an aluminum one also.

The hot plate is this one attached. 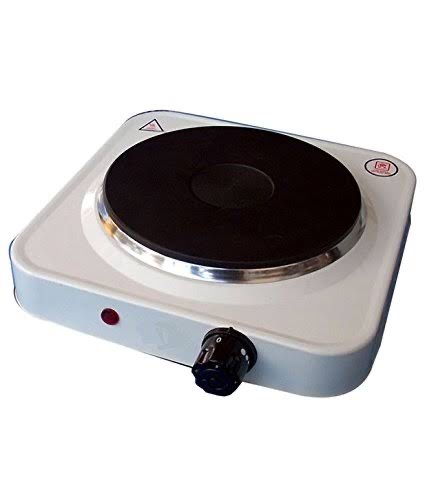 An enclosure under the hotplate will work perfectly fine, provided there is an air gap, the existing rubber feet would be sufficient, The hot plate creates convection currents of air that pull cold air in from the sides. If you wanted to run the hotplate continually at very hot settings (> 200C) then a thin metal plate spaced 5mm above your enclosure would add additional "insulation". I've got almost exactly the same hotplate, and I just used a piece of 10mm plywood, screwed that to the base of the hotplate (after attaching a thermocouple to the central screw under the hotplate), and then attached a plastic framed 1/4DIN temperature controller next to the hotplate, this worked well, I only used it to about 210C to reflow solder.

(a) Normal mounting under hotplate unit: 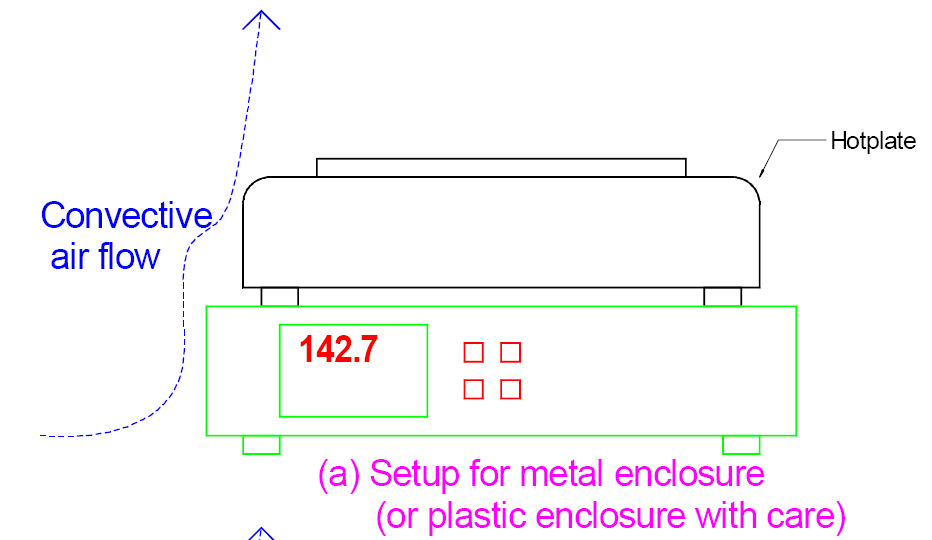 (b) Add a metal spacer plate if using at high temperature for extended period, or heavy items on hotplate and a plastic enclosure, a piece of thick aluminium foil (from disposable baking tray would suffice) air gap >= 5mm. 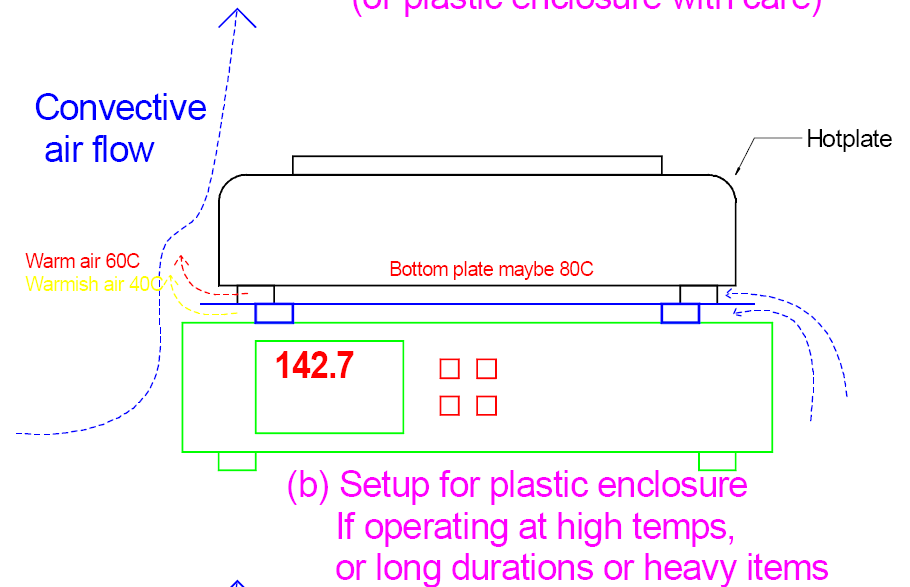 (c) A sheet of plywood works fine under the hotplate, it is what I did, it gets a bit warm on top (but not as warm as if left in the sun!), the wood didn't warp, so can't be "too hot"

Not the answer you're looking for? Browse other questions tagged arduino thermocouple heat-protection heater or ask your own question.

19
Electronic pet-door access control - RFID
4
How to keep the arduino uno up on serial connections?
4
If YOU were starting out now, what PIC16F-compatible IDE and compiler would you choose, and why?
13
Thermistor control of peltier voltage with Arduino (for DSLR chill box project)
0
Detecting a moderately-fast moving object from 1ft away
2
Adequate way to connect sensors far away from arduino
0
How to have multiple devices getting measurement from a single thermocouple
4
Toaster Oven Reflow Thermocouple Grounding
2
How to ground electronics correctly