I have tested a new part number (as replacement) for an LED backlight for an LCD. The LED tested is SML-D15MWT86. We have followed a physical arrangement similar to the original pcb (2 parallel rows, with 4 LEDs per row distributed symmetrically throughout the front pcb. The layers are something like this (top to bottom): -lcd -diffusion film -light splitter + elastomeric connectors (pcb to lcd) -LEDs on the front pcb)

The problem is that even with the diffusion film, the new backlight LEDs exhibit some hotspots (uneven distribution of light). I have tried searching about "datasheets" of diffusion films but found none. Most manufacturer websites only ask the user the physical dimension (l x w x thickness). I wanted to start fixing the hotspot by checking if there are specs I need to see in the diffusion film used.

The original backlight (no hotspots) is white color (intensity is ~200-500 millicandela (mcd), wide beam angle of ~120 degrees, lens type is clear), while new one is green with ~50-70 mcd, wide beam angle of ~180 degrees and diffused lens type as well. I believe it's not the best option for trial and error method (try different diffusion film/LED part no's) to find an LED backlight replacement.

On comparing the old and new backlight, the old one has a clear lens type but the one we tested is diffused. (1) Does it matter that if we're using a diffusion film, the LED to be used should be clear type lens?

I have read LEDs datasheets and found that LEDs have differing beam angles (which appear to be inversely proportional to intensity). On mouser, higher intensity LEDs tend to have lower beam angles (more focused?). (2) If using a diffuser film, is better to actually use LEDs with narrow beam angle and let the diffuser film do the "spreading of light" compared to using LEDs with wide beam angle?

So far, the only way I can eliminate the hotspot is by increasing the distance between diffusion film and LEDs. This is consistent with what I've read on a couple of websites but this is not the best fix I am hoping for, since I would need to re-design other parts of the product (front panel, elastomeric connector height, etc).

Another thing I've done is to try to place the LEDs closer to each other (more concentrated on center). The result was that the edges were considerably darker, and the hotspots were reduced (but not eliminated).

I have not yet tested other diffusion film since we have no other available ones. I have tried other LED as well (SML-D12M8WT86) which has lower intensity. The result is the same (hotspots present).

Another thing I've tested is vary the intensities by varying the current limiting resistors (swept from 5 to 20 mA). The hotspots remain regardless.

Lastly, I tried SML-D15MWT86 in a 5x2 arrangement (instead of 4x2) to increase the overall light output. The hotspots remain, but they don't seem to be as obvious compared to 4x2. This led me to thinking that (3) higher intensity LEDs could help eliminate hotspots given the same diffusion film? 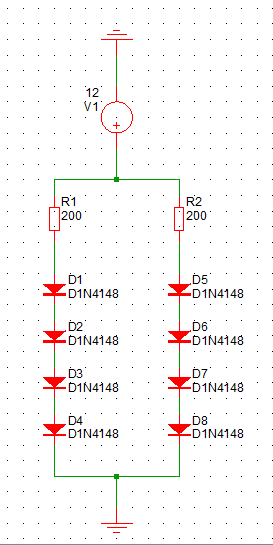 Your problem is you are using "single rank" LED's , these have brightness that can vary +/- 50% from part to part, it's even worse at lower drive currents.

You need to select a part that has "intensity binning" and either order a specicic intensity bin, or get a part where each reel is all of the same bin.
If you are making white backlights, you also need color bins.

I helped a colleague scrape off about 10,000 LEDs from backlight PCB's, because they were un-binned, we sprayed some flux on, heated up the PCB with a blow torch, and wiped em off with a cotton rag. A mistake you only make once!

Here is an extract from a random LED datasheet showing the binning codes and typical variation. 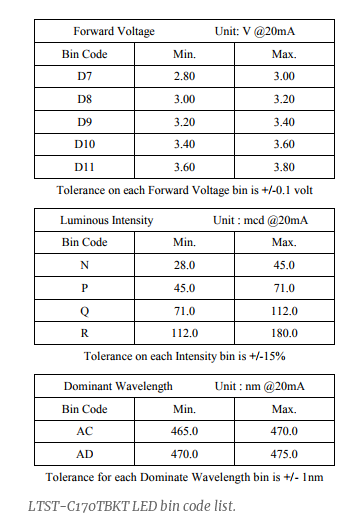 Not the answer you're looking for? Browse other questions tagged led lcd backlight or ask your own question.

2
How to choose LED lenses
2
Choosing between RGB LED types
4
Choosing an LED
2
What type of LCD backlight does this screen have?
4
Optimal Placement of LED's
0
Power supply for 5*10 watt SMD LED?
12
Dangers of IR LED
2
What is the technical part name of conical indent LEDs?
1
Determining LED safety compliance