I am working on a SMPS and wanted to size a varistor at the input to protect the rectifier against transient overvoltage (let's say a 1 ms surge). However, by looking at datasheets the maximum clamping voltage is always related to a transient current value (because of the maximum energy that can be handled by the varistor). How can I estimate the transient current value for a given transient voltage (stated by standards for surge tests) ? Is it only related to the line resistance ?

How can I estimate the transient current value for a given transient voltage (stated by standards for surge tests) ?

You don't need to estimate it - the value will be in the relevant standard that is applied to your equipment. It's a "numbers game" because eventually (in the fullness of time) there will always be a surge that can blow the back off any surge suppressor. So, you state in your product claims that it is designed to handle such and such a surge as defined by this or that specification (this specification is usually EN 61000-4-5).

For indirect lightning (EN 61000-4-5) the output resistance can be as low as 2 ohms and as high as 40 odd ohms. The value depends on the type of port you are applying the surge to i.e. if applying to a power supply port then it's likely to be 2 ohms hence, a 2 kV specified surge could result in a 1000 amp surge current under near-short-circuit conditions: - 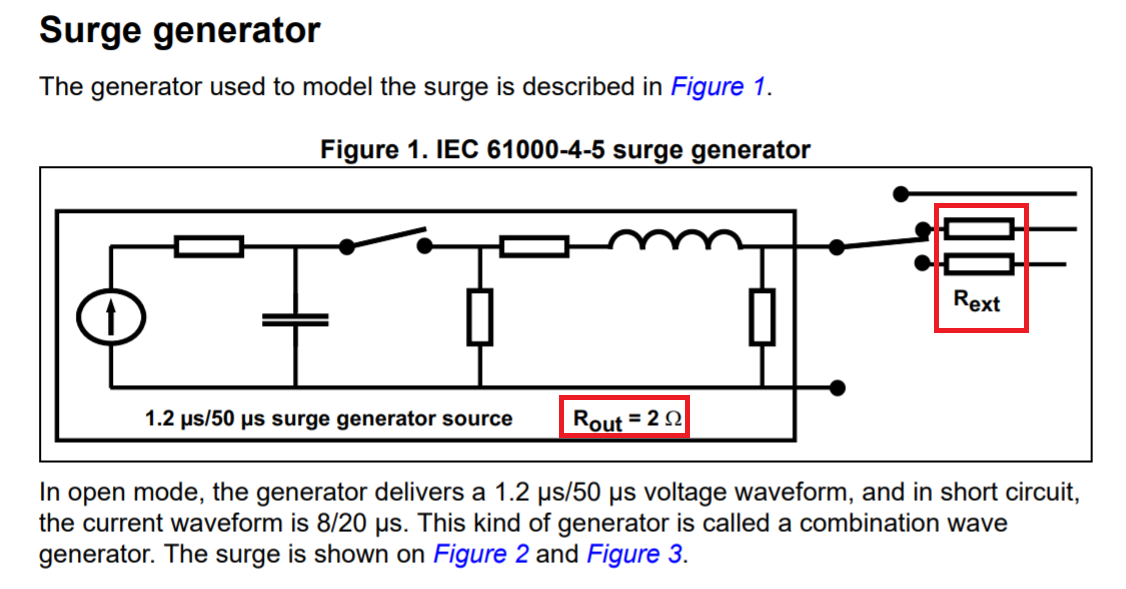 So, if you are trying to be compatible with 61000-4-5, you should be able to get an idea of the numbers from the linked document. If your power supply has power cabling then the effective resistance value will increase above the value stated in the standard and make life easier for your surge suppression devices.

Not the answer you're looking for? Browse other questions tagged current switch-mode-power-supply transient varistor or ask your own question.

2
Thermally protecting a varistor
0
The capacitance parameter in varistor data sheet
3
Determining the surge duration of a double exponential transient?
6
How to choose the right Metal Oxide Varistor (MOV)
0
AC/DC power supply: help to choose fuse, varistor and/or TVS diode
1
Maximum allowable ripple current and surge current for tantalum capacitor
5
How can I compare a TVS diode with a varistor?
0
Calculation of varistor parameters for AC line protection
2
Transient and Surge Protection