Can I use some type of transistor i.e. BJT or MOSFET to act as normally closed relay?

I am designing a power bank which uses sustainable power generation methods for a school electronics project. It is based around the Arduino Nano.

At the moment I am planing to charge an 18650 cell using a hand cranked generator which I have designed as well as a small solar panel array.

One problem I had with the hand crank is that due to the nature of hand cranks its output voltage is not very stable even when using a linear regulator or a buck converter. 18650 charging circuits require a stable 5V input so they are not a practical option for me.

Instead I plan to connect the output of my generator directly to the 18650 cell to charge it. This will however become a problem if the battery gets too full and therefore gets overcharged.

I am already using the Arduino Nano to read the voltage of the 18650 cell and output this as a percentage to an LCD. I now want to add a function to the power bank where it continually checks the charge level of the battery using the data from my pre-existing program to make sure the 18650 is never overcharged.

To do this a couple of things need to happen and that’s where I plan to utilise some type of transistor.

First I need cut the connection from the 18650 to the rest of the circuit each time the voltage is checked (maybe every few seconds.) This is to make sure that the voltage read by the Arduino is the actual voltage of the 18650, if it were connected to the circuit and thus was under load the voltage would be less than actual and this effect is not linear so almost impossible to account for in code.

Next I need to have a second transistor which would cut off only the charge going into the battery in the event that it is full to prevent the overcharging problem.

The way I want to do this is by using an output pin on the Arduino to control a transistor to break the connection to the 18650 when the pin is high. When the pin is low I want the circuit to be closed.

However I have only ever seen BJTs and FETs used to make a connection when the control voltage (Arduino pin) is high.

Yes I could hold the Arduino pin high instead but this would waste more power.

Yes I could use a relay in a normally closed configuration, but I think the constant clicking would get annoying.

How can I achieve this normally closed relay effect With a transistor?

Sorry for the long winded explanation, but I thought it would be useful to offer some insight into the project to give you an idea of the setup.

There are a number of other possible solutions such as short-circuitung the generator that might be easier.

Yes I could hold the Arduino pin high instead but this would waste more power.

That's a wrong assumption. It is NOT TRUE. Microprocessors like the ATMega328 that is used in many Arduino modules are build using CMOS technology and that means that they can maintain a voltage (low or high) at any output and as long as no current flows then this does not consume any power.

If you would use a MOSFET (connected to the output of the Arduino) to switch on/off your relay or LED then no current would flow as a MOSFET uses similar technology so again, no current flows to keep the MOSFET on or off.

So no power is used to keep a MOSFET continuously in an on or off state. Only when it is switched on => off or off => on a little bit of power is needed.

So your question is based on a false premise.

Yes, normally of devices do exist: depletion type MOSFETs and JFETs as well.

But these aren't very suitable for switching things they're used in some niche applications for amplifying the voltage of an electret microphone or amplifying RF signals.

TLDR: you're asking for a device that's unneeded as we can solve the "problems" you see using simple circuitry. These are common solutions that all designers know about.

So first off, charging a LiIon 18650 direct off a hand crank is a bad idea. They need precise control over the rate of charge or else they can explode. So using a hand crank has all sorts of potential problems if you dont have more intricate ways of controlling the voltage and current.

Second, yes you can use a FET to act a bit like a relay, but it requires an active circuit to do so so while it may make sense on the side that disconnects the main circuit it may not make so much sense on the crank side. If you wanted to do this on the crank side then I would probably consider a latching relay since it will likely stay in an on or off position for an extended period of time.

However in all honesty I'd scrap your entire approach and rethink it. What I would do is hook up a very large capacitor (maybe even a super cap) to the crank. This will ensure the voltage stays constant for an extended period of time and not change wildly, then hook this up through some charging circuitry.

You might be looking for a "depletion mode" MOSFET, these are on all the time, unless you drag the gate negative, which turns them off.

You could replace the Arduino with a zener diode, but you would need a low current zener, and a quite high value resistor, you could probably put another transistor in there to turn on the resistor only while the generator is cranking. 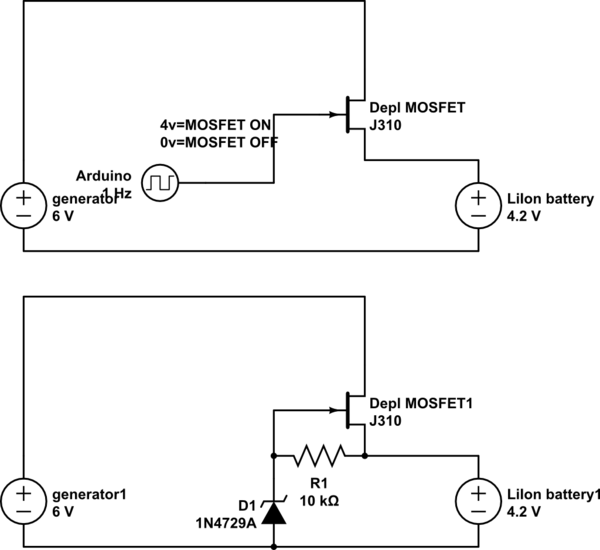 Not the answer you're looking for? Browse other questions tagged microcontroller arduino transistors mosfet relay or ask your own question.

3
Can an Arduino use a 12 V relay?
1
How can I replace a relay with a MOSFET Transistor?
2
Why is the relay switched by a NPN transistor still on while the Arduino out is off (low)?
1
Disconnecting two batteries in parallel when motor turns on not working
1
Arduino battery power stay on for button - Not quite working
1
Normally closed mosfet circuit
0
Normally Closed Negative Output, Positive Input Relay
1
Which type of transistor (MOSFET or BJT) would be better to use for the longest battery life?
1
How do I choose what type of transistor to use?