What should attaching another magnet to the back of the speaker magnet do?

The dupe speaker I have here 8 \$\Omega\$ 0.5W had it's magnet split from the coil/cone. So I did something thoughtless - attached the speaker magnet to the back of the other speaker (same specs).

I don't notice any difference except (this may be my imagination) it seems to sound a little louder.

Depends which way round it is. It's almost completely out of the main magnetic circuit, but its fringes will either add, or subtract, a little - maybe 10-15% - to the flux in the field where the voice coil operates.

If it subtracts from the flux the speaker will be slightly - paradoxically - louder (the same way an electric motor goes faster when you reduce the field strength - more motion is required to generate the same back EMF). Probably about 1dB louder which is quite difficult to hear. (Some preamps have digitally generated 1dB steps so you can test what 1dB sounds like, and yes it is just audible).

If it adds to the flux, the speaker will be quieter - but its bass will be better controlled.

I have seen some poor guy flown from Japan to Europe to spend a few weeks supergluing magnets onto the back of 5000 drive units, to increase the flux where the original magnets were weaker than the manufacturer had promised.

It will cause the voice coil to not move how it was designed too, since the induced magnetic field will be different. It will most likely effect different frequencies differently, for example higher frequencies will probably not notice a difference, but lower ones may not be as sinusoidal as they originally were (because the cone may have less resistance going backwards, and more going forwards.) However the overall effect will probably be minor.

One thing to not is that it could cause premature damage to the speaker as the voice coil may make contact with the side at some points.

The back of the magnet is usually flat iron. Any magnet stuck to the back will have very little effect. The magnetic flux lines from an external magnet will not pass through the air gap that the voice coil moves in so they will have no effect.

If the speaker should be of a budget type that has a magnet exposed at the rear and no outer iron pole then there might be some reinforcement if the external magnet reinforces the field due to the existing magnet and the lines of magnetic flux pass into the metal gore and then radiate out through the voice coil.

Below is a diagram that shows how the typical speaker is constructed and how the add on magnet at the back will have very little effect at the voice coil. Illustrated are a more exotic annular pole magnet and a common top bottom pole magnet. 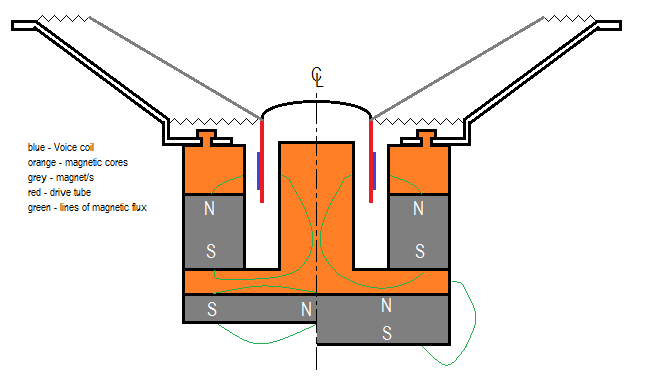 Not the answer you're looking for? Browse other questions tagged speakers or ask your own question.

4
Which speaker is better for an application based on it's datasheet
1
Chaining output of amplifier (to speaker) to another amplifier
0
What frequencies blow out the speaker most?
0
“mapping voltage” on an analog potentiometer using a voltage divider
3
Loudspeaker volume issue
3
Can I convert a mini guitar-amp into a portable auxiliary speaker?
1
LM386L does not amplify the microphone signal