I managed to reverse engineer a headphone amplifier in a USB DAC that I bought on aliexpress. As I expected there is a electrolytic capacitor in series to the output, but there is also a 10Ω resistor in series. What is purpose of this resistor? I would like to short it to increase damping factor (see NOTE1), but I'm sure there is a reason to put it there.

NOTE1: Headphones have unwanted own resonances. Removing the series resistor decreases their effect to the sound assuming the headphones are passive. 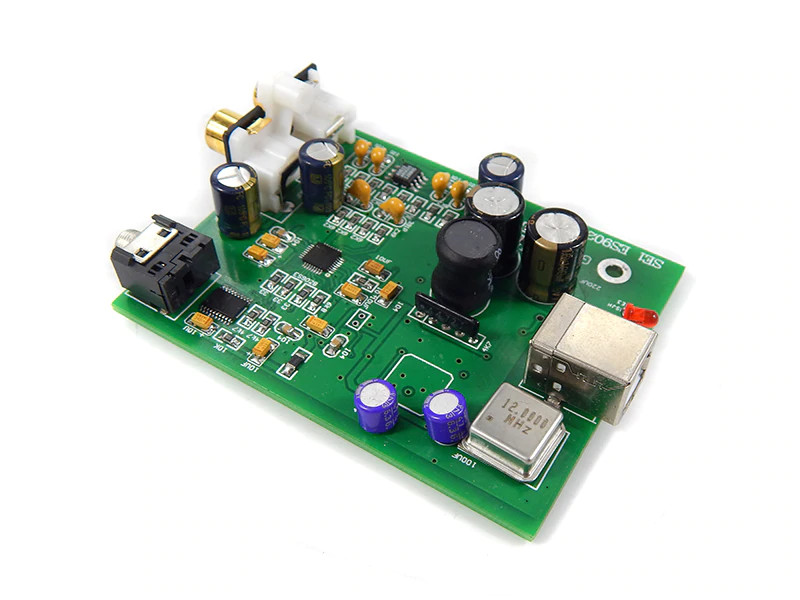 It is there for many reasons, but we can't really know what was in the head of the designer when this was drawn.

It's likely that it is being used to limit some of the high frequency peaks. I am not an audio expert and don't know if that is generally a common thing for audio performance.

By limiting the output current we can limit the ramp rate of the signal - this usually means that the output waveform is more rounded. When looking at the waveform in the frequency domain the harmonics are attenuated.

After reviewing the datasheet it looks like it is recommended to add some series resistance to increase phase margin of the opamp.

If greater phase margin is desired, a small resistor can be used in series with the output to decouple the effect of the load capacitance from the op amp (see Figure 26). In addition, running the part at higher gains also improves the capacitive load drive capability of the op amp

It's a protective resistor to limit maximum power delivered to the load so you're less likely to blow up your headphones or your eardrums.

Headphone cables can have a lot of capacitance (as much as 0.5nF+) and that is a pretty high bandwidth amplifier, and the gain is close to worst-case.

So the 10\$\Omega\$ provides a fair bit of insurance, though I suspect it will typically be pretty good with that relatively huge 100pF feedback capacitor in there, and simulation seems to confirm that. With a very small cap rather than 100pF it has a tendency to ring at 5 or 6MHz.

This is a guess, I haven't measured nor calculated it.

AD823 is high speed amplifier, it can amplify at several megahertzes. That's limited by inserting those small capacitors, but together with complex reactive load (speaker element coil inductance + wire capacitance) the total effect can be difficult to predict. The series resistance guarantees the amp is never loaded by a low loss resonant circuit.

The other answers are good, and may be more correct than this one. But nobody else mentioned this so I though I would.

Not the answer you're looking for? Browse other questions tagged resistors audio dac reverse-engineering headphones or ask your own question.

0
Differential output to headphones
11
Why aren't active headphones equalized to a flat frequency response?
1
Output to Speakers or headphones?
1
Connecting DAC to line out and headphones
48
Loud pop noise while plugging to a headphones jack
4
Device to loopback mic to headphones