Basic BJT current mirror : … so the collector-base voltage of Q2 is also zero?

"...If Q1 and Q2 are matched, that is, have substantially the same device properties, and if the mirror output voltage is chosen so the collector-base voltage of Q2 is also zero..."

My question is : Why collector-base voltage of Q2 is also zero ?

If you can hold just the first two ideas in mind at one time, you can analyze many circuits close enough for usable results. The third idea, the Early effect, can become important in other circuits. This one is an example where it often may matter.

This is a good point to suggest that you also look at the cascode arrangement where one BJT is used in a way to pass along the collector current of another BJT while also mitigating the Early effect in that other BJT. But I won't discuss it here.

So let's look at the schematic, with some added bits to help clarify as I write more:

On the left, I've added two resistors. These are due to the Early effect. Their values can be approximated with \$r_o\approx \frac{V_A}{I_\text{C}}\$. On the right, I've simplified the diagram, slightly. Since \$Q_1\$ is diode-connected, we can replace it with a diode symbol. This may help get some points across more easily. (Or it may do the opposite. We'll see.)

The first part of the quote from your link is:

For the most part, by matched they mean the first parameter I mentioned: \$I_\text{SAT}\$. This is the most important parameter to match because of the Shockley equation relating \$V_\text{BE}\$ and \$I_\text{C}\$ (lacking the Early effect):

If you know one, you can calculate the other.

All this assumes that both BJTs are operating in their active regions, of course.

Discrete BJTs from the same device family can have their values of \$I_\text{SAT}\$ vary by as much as a factor of 3 around the average value. This translates to as much as \$\pm 30\:\text{mV}\$ difference in \$V_\text{BE}\$ given the same \$I_\text{C}\$. If you selected poorly enough, getting one BJT from one end of the spectrum and another one from the opposite end, the difference in current could be as much as 8 or 9. Not so good for a current mirror where you want very similar currents. A way to help repair this is to add emitter resistors in discrete designs. But how to design that so it works well is beyond the scope here.

The next part of the quote from your link is:

that is, have substantially the same device properties,

I've already discussed the important property, \$I_\text{SAT}\$. But I've left out \$\beta\$, above. So I'll address it quickly.

The next part of the quote from your link is:

and if the mirror output voltage is chosen so the collector-base voltage of \$Q_2\$ is also zero,

So they are just being cautious in their wording.

In the interest of some completeness, I'll present some common modifications. You should become familiar with them:

In the middle case, \$Q_3\$ is moved over into a new position, pushed over so that it falls within the load current path, now. But positioned here, it serves useful two jobs at once. It still supplies the two base currents for \$Q_1\$ and \$Q_2\$. But it also arranges things so that \$Q_2\$'s collector voltage is the same as its base voltage. This effectively nullifies \$Q_2\$'s Early effect. But now \$Q_1\$'s collector voltage isn't the same as its base voltage, but instead one \$V_\text{BE}\$ above its base voltage. So \$Q_1\$ and \$Q_2\$ are operating with slightly different \$V_\text{CE}\$ values and the Early effect has a small effect on the collector current differences. But as the difference isn't that much the problem is relatively small. Another impact is that now \$R_\text{SET}\$ is again supplying more substantial base current to \$Q_3\$. But this is still better than in the case with only \$Q_1\$ and \$Q_2\$, where \$R_\text{SET}\$ had to supply two base currents instead of just one, as in this new case. This is the basic Wilson mirror.

The right side shows what I call a full Wilson mirror. If you look closely, you'll see now that the collectors of both \$Q_1\$ and \$Q_2\$ are identical. (This is very good, as the Early effect will be nearly identical for them.) \$R_\text{SET}\$ now has to again supply two base currents. But as that can be accounted for when setting a value for it, the benefits are considered worth the costs in some circumstances. You could, if you wanted to (and had the extra voltage headroom for it and liked slapping down more BJTs), place a new \$Q_5\$ in a similar position to \$Q_3\$ shown in the left-most schematic to alleviate the base currents drawn away from \$R_\text{SET}\$. But I don't recall seeing it used.

There are some remaining nuances which would disagree (but only slightly) with what I presented above. But it would draw this out way beyond where I should. Feel free to think about it on your own.

The sentence you are talking about is explaining that current in each transistor is equal when the collector base voltage of Q2 is zero. This means you are setting Vout equal to VB to achieve the same current in each leg of the circuit. This is done in the example to explain the math behind the current mirror.

Usually the collector-base voltage of Q2 is not zero in practical circuits, but the math gets more complicated because you have to take into account the Early effect. The sections after the initial BJT section in your source (output resistance, compliance voltage, and extensions and complications) go into what happens when the collector base voltage is not equal to zero for Q2

The main problem here is confusing the premises and the conclusions. \$V_{BC}= 0\$ is a premise here, not a conclusion. The (full) statement that confuses you is:

What this sentence is telling us, is that IF the following happens: 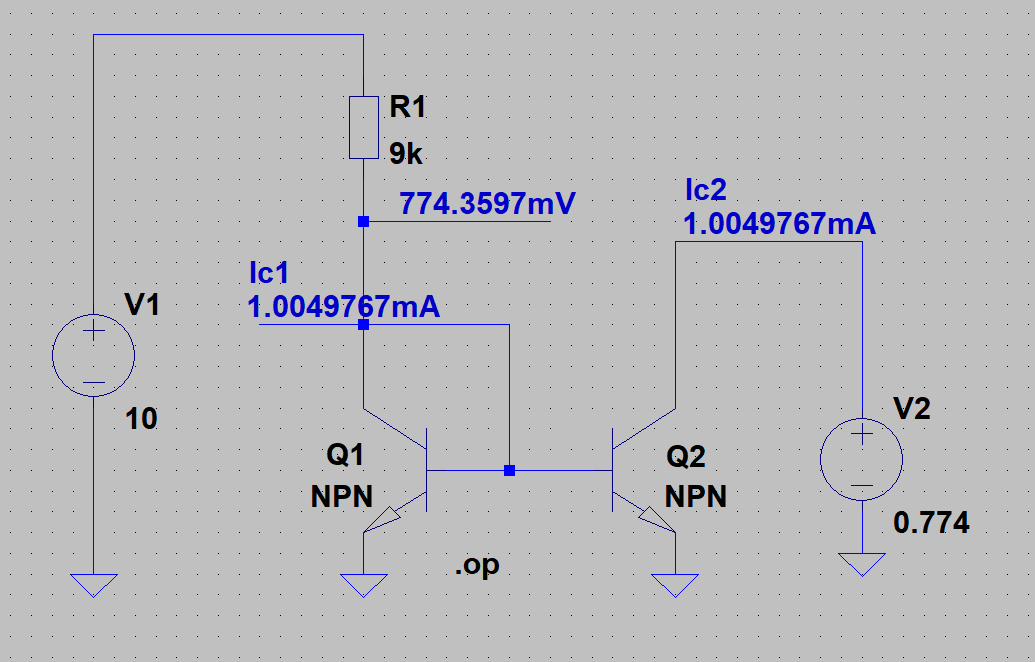 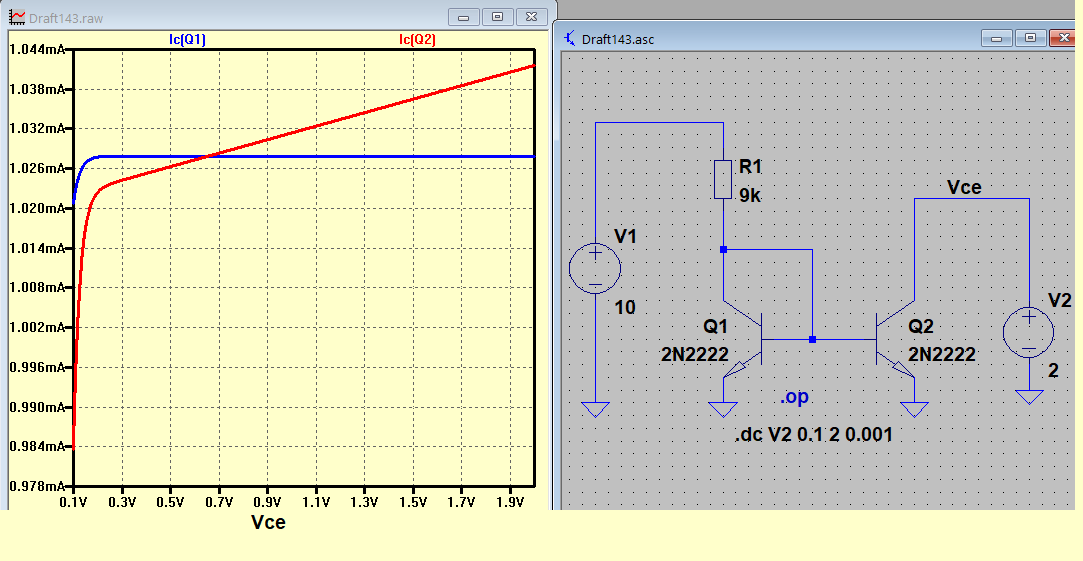 And the main idea behind current mirrors is that the output transistor (\$Q_2\$) behaves just like a VCCS (Vbe control-current source). So by changing the \$V_{BE2}\$ voltage we changing (setting) the output (\$I_{C2}\$) current. And we don't care about base current we assume \$ \beta = oo\$.

The first transistor (being called diode-connected transistor) job is to convert the input current into the "input voltage" \$V_{IN} = V_{BE1}\$ and nothing more.

2) from the schema without load :

3) Measure with a more realistic transistor that include early effect

This is the circuit to do for an implementation with discrete components to avoid thermal runaway.

5.1) Without a load resistance

From this link, and with the schema before it gives the beta. So the calculus can be made : 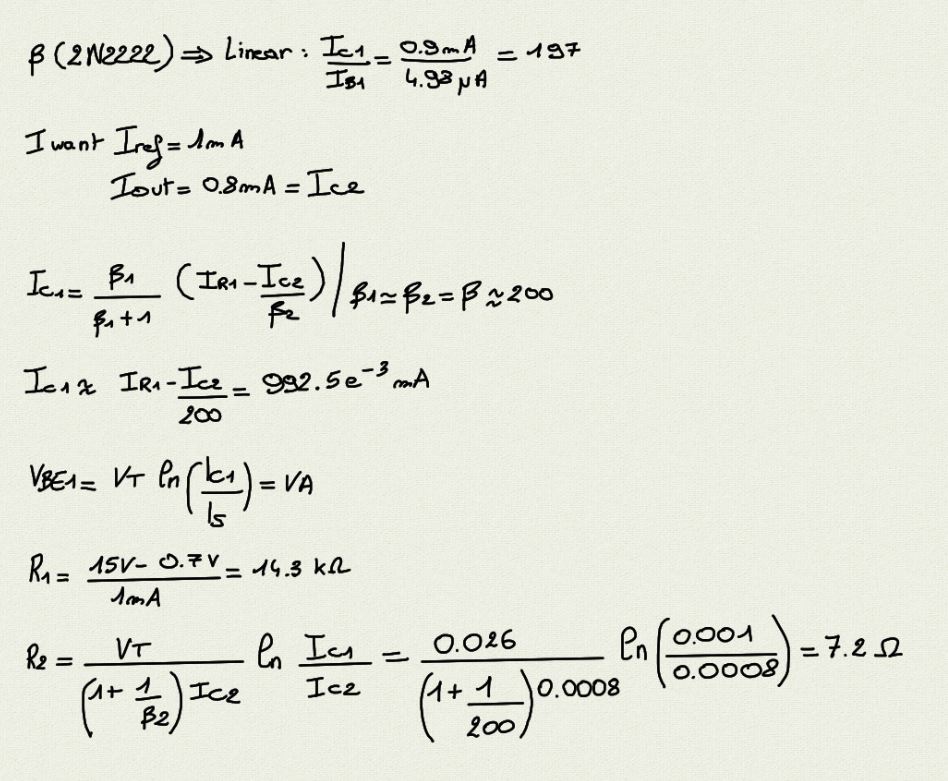 Not the answer you're looking for? Browse other questions tagged current bjt basic mirror or ask your own question.

2
Current mirror Configuration using BJT application
7
Why the base current decreases automatically?
0
How collector-base junction in BJT works
4
BJT - absolute maximum base current?
0
Common base circuit with zero supply voltage
3
Confusion about a basic BJT current mirror
1
Necessity of a current mirror circuit - MOSFET/BJT?
0
How is the Collector-Base region reverse biased in Common Collector configuration of BJT?
0
Collector current in a BJT transistor whose base and emitter are forward biased