A kill switch for a car

I want to add a kill switch to my car for the fuel pump relay. The switch I would like to use is one which would need to be pressed/flicked on to start the car but when the car is turned off the power to the switch is lost then the switch automatically turns off without touching it so it would would only be used to turn the car on.

Is there a switch to do this?

I guess you want a hold circuit. It's common to put a relay to switch voltage to its own coil. An external switch is pressed to make the relay pull when the system has been unpowered a while. Only a momentary press is needed.

BTW Beware inserting hobbyist grade parts to a vehicle. It's begging troubles (NOTE1). A car is very hostile environment for all electric circuits.

NOTE1: Think a day you are crossing a highway. A truck is coming, but you have plenty of time to drive out of its way. Or so you thought. The kill switch happens to work literally just at this moment. If you like to think this do it beforehand. Later it will be impossible.

Use a relay rated with contacts rated for switching the motor.

This isn't a "kill switch". It's an automatic power-off. I don't see the benefit as turning off the ignition would turn off the pump in the first place. The only advantage is if, for some reason, you don't want the pump to start automatically with the ignition. You'll need to remember to turn it on before you flatten the battery trying to start the engine without fuel.

Instead of disabling the fuel system, what if you disabled the engine starter motor using a hidden switch. The driver of the vehicle would have to turn the ignition key while holding down a switch at the same time.

If an un-authorized user has your car keys or uses brute force to actuate the ignition system, AND they don't know about the hidden switch, the car will not even turn over.

An improvement to this concept would be to sound the vehicle's horn whenever the starter motor relay / solenoid is energized, AND, the hidden switch is NOT pressed. This "feature" would be helpful during "new user training", and would sound the horn the moment a person tried to start the vehicle. If the sound of the car's horn occurred while you were sleeping and it woke you up, you could do something about it.

You did not say what make / model / year vehicle you have, so I'll show you a simple circuit I used in a 1984 GMC truck and a 2003 Chevy Caprice. General Motors used a 10 ga. purple colored wire from the ignition switch to the engine starter motor solenoid (S terminal).

The relay (RLY1) I used is similar to this one 30 amp automotive relay with pigtail. 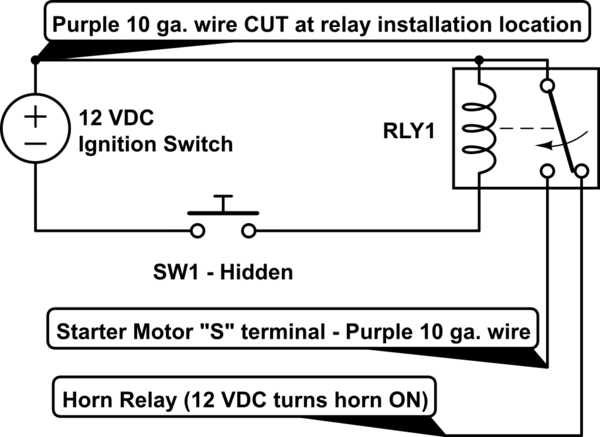 to complement the already given answers,

You need to know what is Contact 15 in your Car: https://en.wikipedia.org/wiki/DIN_72552 - this (and only this) should be the one you insert the kill-switch

Also the Switch or Relay at least must be able to carry the current of contact 15. At least in older cars, there is a fuse for that (At least as to my knowledge). Here you can read the value you should consider.

Also, as already mentioned, be sure to use automotive grade switches, relays, also only use crimp connections made with tools intended for that application.

I built a circuit like this years ago, but instead of a mechanical switch, I had it wired to a pair of magnetic reed relays. One was hidden behind the dash, and it required that a magnet be waved over a specific and non-obvious point on the dash to close the circuit, AND the drivers door had to be closed - there was a magnet in the door and a second reed switch hidden in the door frame. It controlled an electric valve in the fuel line, and if the door opened, the valve closed, and the engine would run out of fuel in around a minute or so (sooner if it was cold and the choke was still partly closed).

I had to turn on the ignition AND close the door before I could activate the switch behind the dash and open the fuel valve. The logic was that if someone caught me by surprise me at a stop light, I could just get out of the vehicle, let the thief drive away with it, getting him away from me, but the vehicle's engine would quit within a few hundred yards - WITHOUT me having to do anything special, like flip a switch, and WITHOUT alerting the hijacker that anything had happened. Just opening the driver's side door was enough to break the circuit, but the vehicle would continue to run on what fuel was still in the carburetor.

Works great - I still have it installed, although I have never yet had to rely on it in such an emergency situation.

Not the answer you're looking for? Browse other questions tagged switches automotive or ask your own question.

1
What do you call a switch/relay which switches on an appliance for a given set of time?
2
Design of a Five Second Kill Switch
2
switch 12V with 12V ACC (car)
0
Momentary Bosch Style Relay with Changeover
0
Do fuse tap turn off with kill switch?
0
Combo Indicator LED / Fuel Pump Relay Kill Switch
0
Is using a wire rated the same as its circuit's fuse OK?
1
Kill Switch For Car to Deter Theft