(I removed both of the two old questions since they are going wild and off-topic, but the main concept is the same, just as title states. Also some details are clarified and informations are appended.)

I need to record the output of two sound generator chips with a Sony PCM recorder.

The recorder does not specify the maximum input level, the only technical specification on manual is

To make sure the recorded audio does not become distorted, I need to keep the input below 0dB. After many trying, it seems like when the VU meter shows 0dB, the input voltage is about 0.5V. I am not sure how to measure the exact voltage for 0dB, which seems like has many definitions (0.6V, 0.775V, 1V, etc).

Both chip are designed to simply drive an NPN transistor as amplifier, and drive a speaker with it: 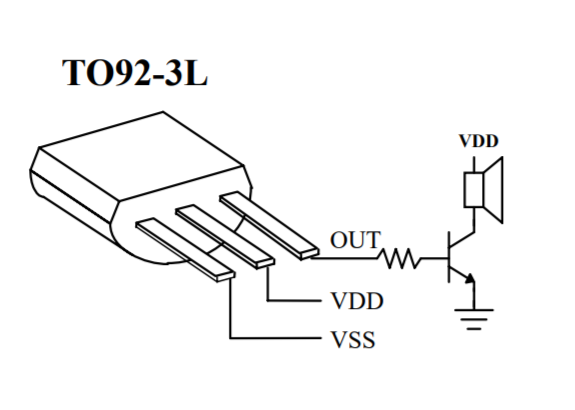 And the datasheet both have this entry about output current, but not voltage (I am not sure what does the VOH and VDS mean), and when I measured the voltage of the output pin when the chip is working (a song being played), the voltage is about the same as VCC: 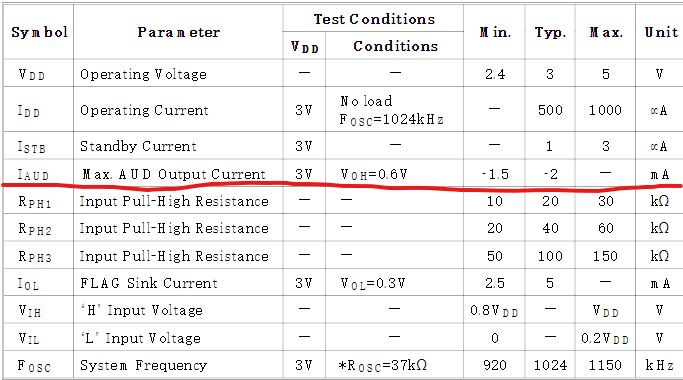 So I tried various ways to capture the highest quality of audio from them. I have found that I will need a resistor from AUD (the output pin) to ground, to provide the chip a load and make sure that the output voltage is correct. But how do I determine the value of that resistor? For example, I used a potentiometer to try many times on the HT3894, and seems like the optimal value which I am getting max audio level without peaking (which from the measurement above, should be around 0.5V maximum) is ~390Ω. But I assume there will be some mathematical way to get this value from the specs the datasheets provide, since it won't be random?

Also when I used the method stated above to capture the output, it sounds nothing wrong when played back and heard by ear, but when I examine the waveform in DAW, I saw something unusual:

The waveform has a downward peak, which I assume it's some DC thing in the output. To prove this, I tried to connect a low voltage DC source to the audio input and record it, and sure enough:

So the second question is, is it possible to eliminate this DC signal mixed in the output of the chip? How to? I tried to connect a capacitor in between, but the sound just becomes hoarse, and the downward "bulges" in the waveform are still there.

Also I have found a recording sample of the same song done by others (bottom image), which does not have the "bulges". After comparing the two, I found out that my recording (top image) is more of a square wave variation, looks like some sort of PWM signal.

Here are the datasheets if you ever need other information:

You're looking at the low frequency response of your soundcard input : both the waviness and the response to a DC step. The flat top squares on your waveform (last plot) are trapezoids in the "other" recording : this just says your recording has better bass response.

If it sounds fine on playback, don't worry about it. If you want poorer bass response, either AC couple into the soundcard, or simpler, use the sound editor facilities to cut the bass. Which is probably all they did on the other recording.

Not the answer you're looking for? Browse other questions tagged audio analog or ask your own question.

4
In a line-level audio signal, what function of voltage produces amplitude?
3
Join the microphone and audio lines from a headset for recording
0
How to reduce tape hiss while recording a cassette tape with digital data as source
2
How do I wire a Shure WL 185 to to iPhone or iPad?
0
Auto Audio Gain Control IC for normalized audio from line level input
0
Impedance matching for analog audio from aircraft (high impedance) to USB audio IC
1
Convert CMOS-level signal to microphone-level (0..3V --> -1..+1V)?
0
Downsides to terminating a line level audio signal into an amplifier without an output resistor