How can I convert an audio PDM bitstream into analog form?

I have collected PDM bitstreams from MEMS microphones and I'm looking to convert them into analogue form. Does anyone know some practical implementation details on how to do this (beyond a quote from Wikipedia that states this only requires a low pass filter)?

Edit: copied from the comments below

I have some sample PDM bitstreams stored in Excel and I'm looking to convert to amplitude in Matlab.

The sampling frequency is 4MHz, the max frequency of the sound that can be picked up is 50kHz (mics are being used in an ultrasonic application), PDM bitstreams was captured using digital inputs on a Picoscope oscilloscope. PDM data was not filtered, the raw PDM data from the mics was captured. 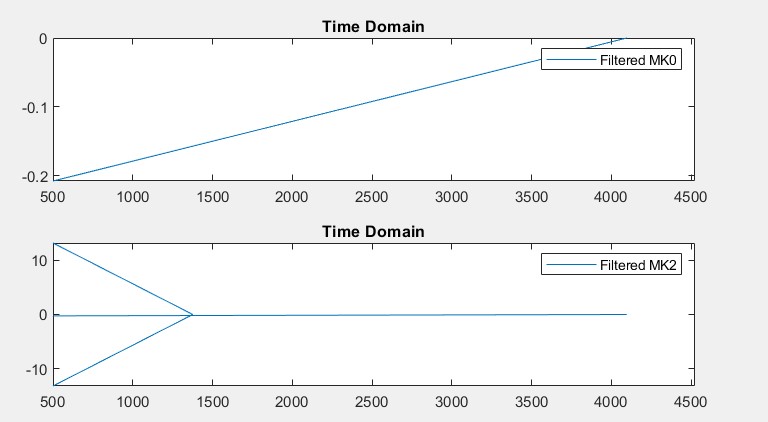 Since the question contains too few details, this answer is simply a generic filtering code which the OP can use as a starting point. I am posting this since searching below keywords in EE.SE didn't turn up good results for me.

Below code doesn't follow good coding guidelines. Use it only as a starting point.

Since a sample of OP's original signal is not available, I have generated a PDM signal in Matlab/Octave which is used in later sections. I used an algorithm from Wikipedia as such for PDM generation. Code below 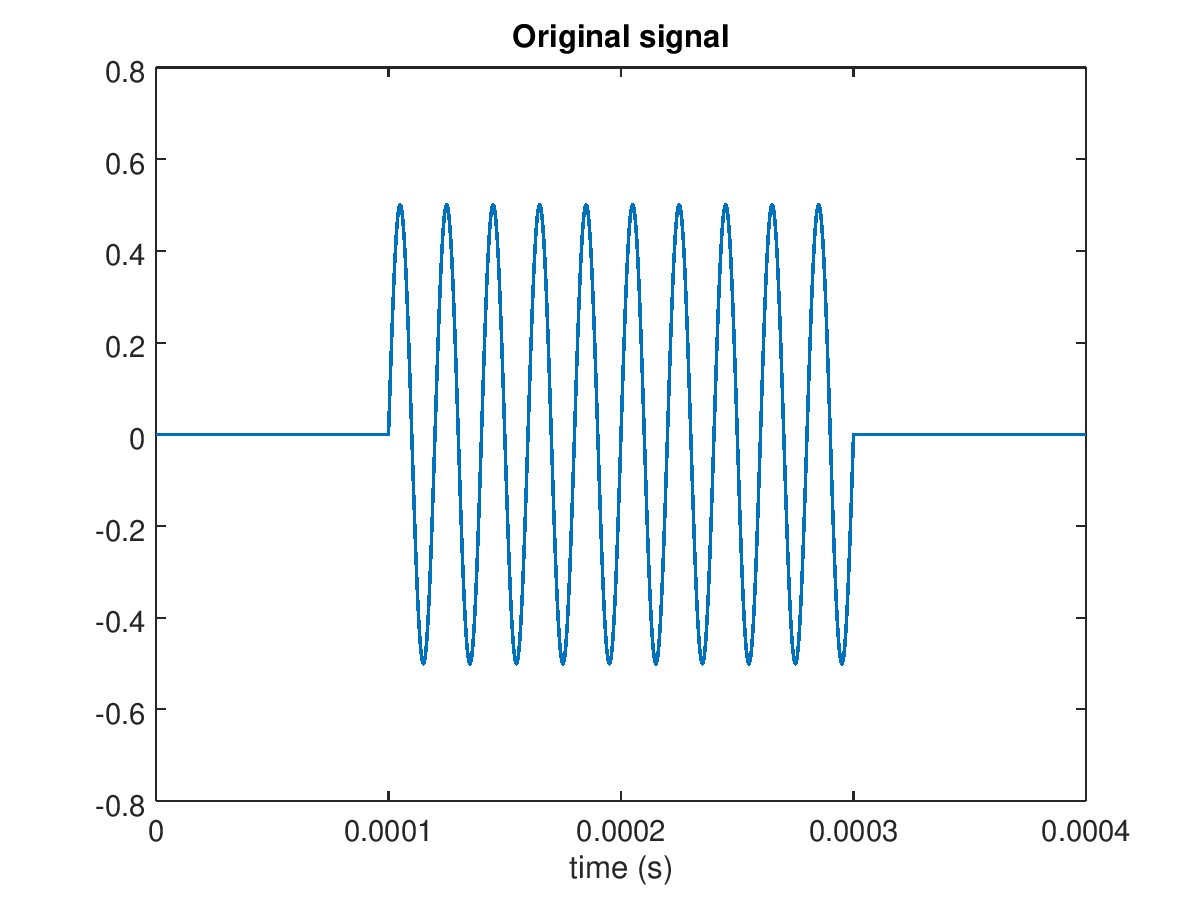 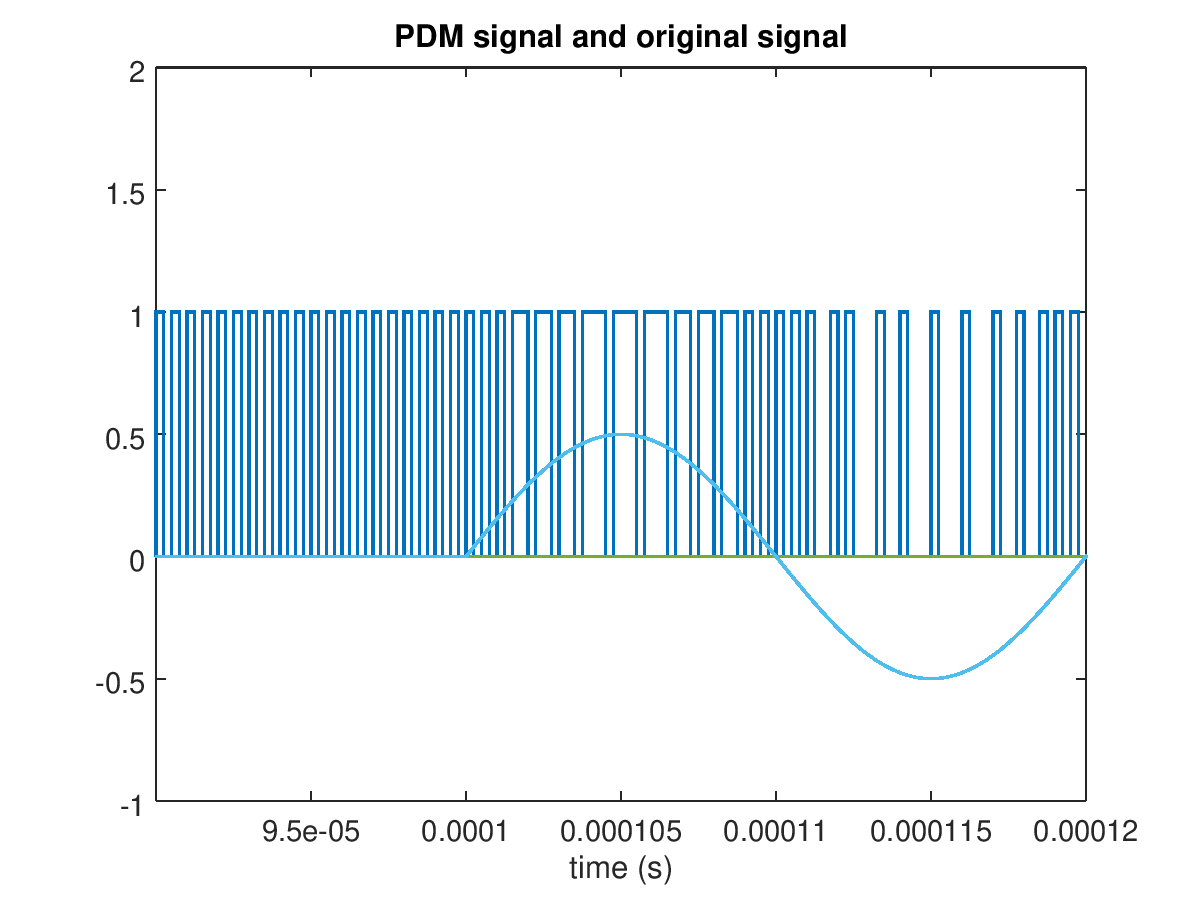 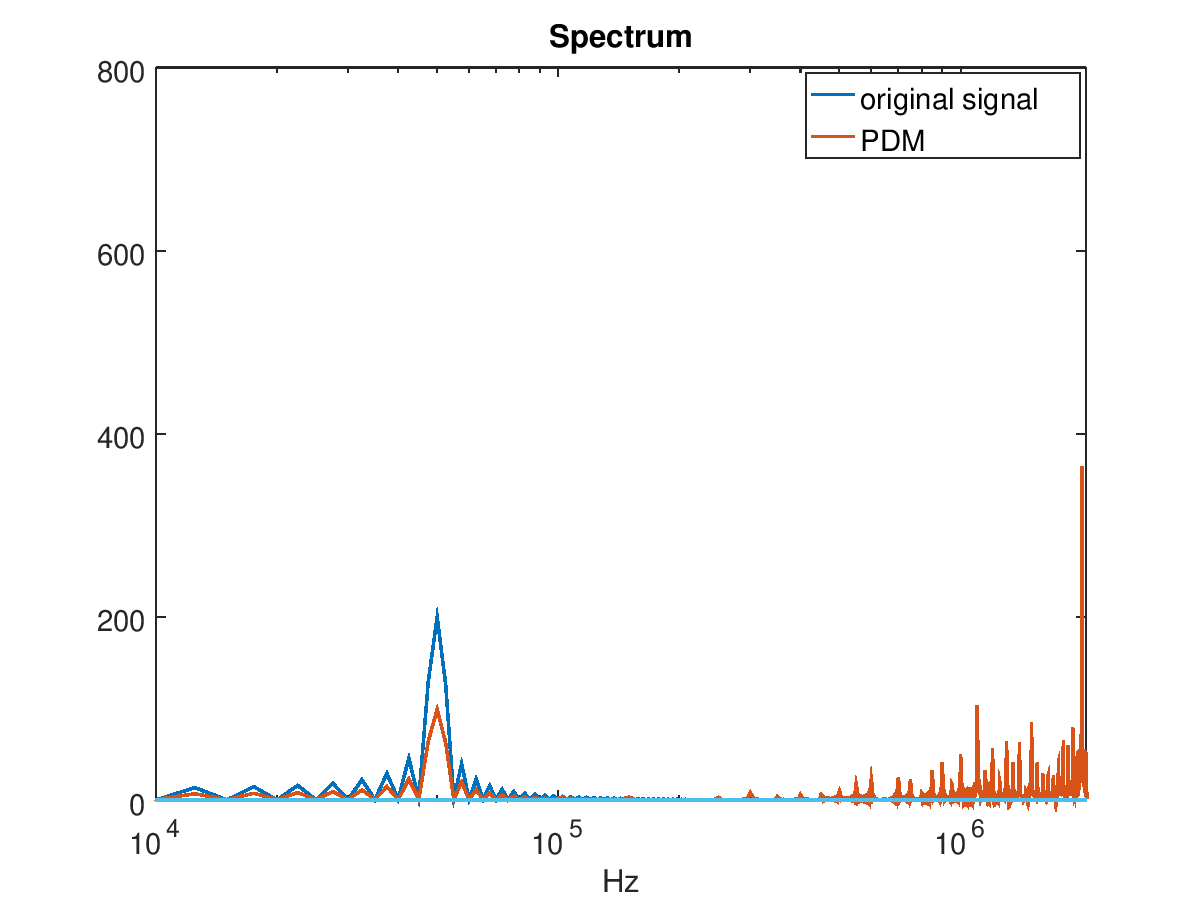 Analysis of the PDM spectrum before filter design start

We now assume we got the above PDM signal from OP's hardware setup, with only accompanying info being the 4MHz sampling frequency and that the original message is about 50kHz.

Feed the above specifications into the design equations of the selected filter type or some thing like this. If the equations used are for continuous time filters, we will have to convert it to discrete time. Here, I didn't need any such procedure since the cheby2 function I used directly uses the transition/stop band specification and I just had to select the order by trial and error till pass band response also satisfied the requirements. 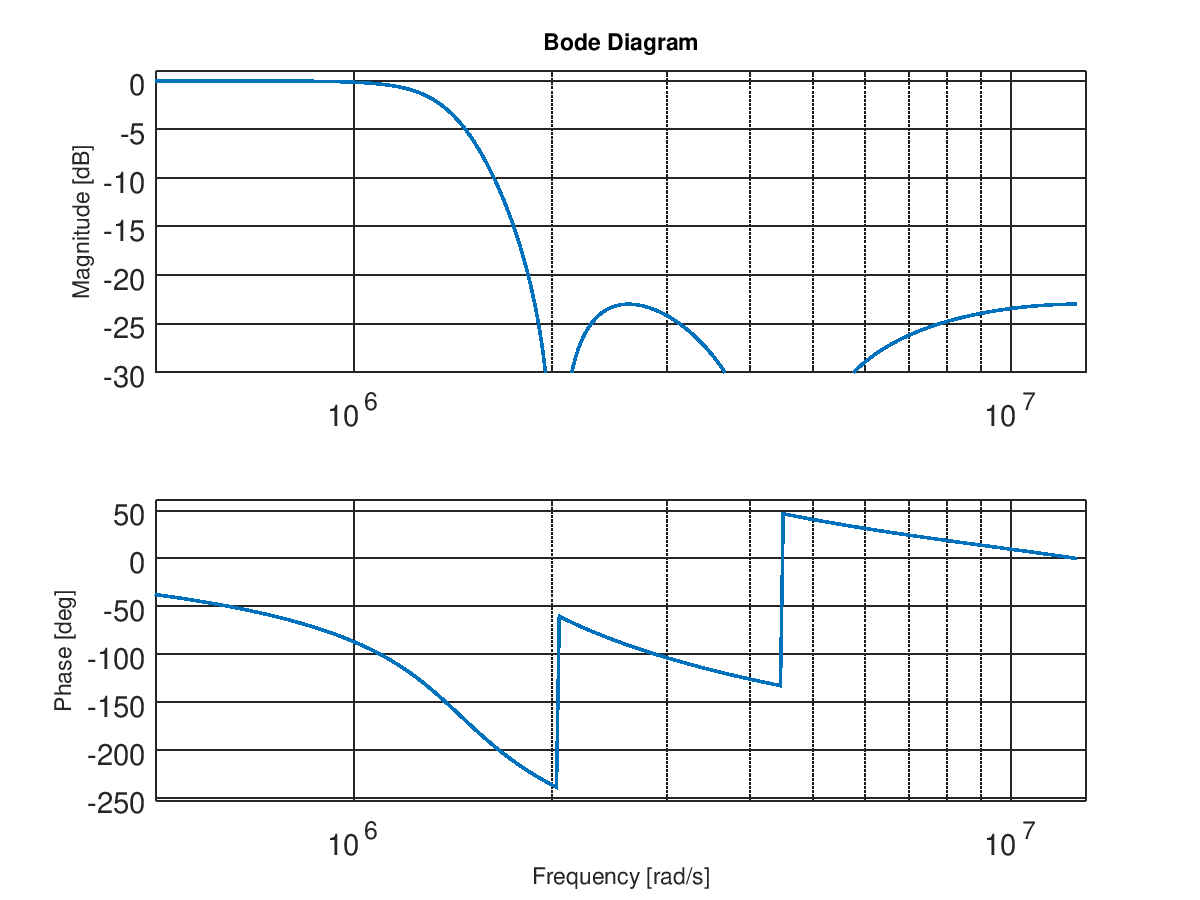 The filtering code at the top of this answer gives the recovered signal. I have shifted (-0.5) and scaled (x2) the filtered result for easy comparison to original. It is shown below. Magnified portions show that the noise is still present. If the amount is too much for the given application, repeat the full procedure above with tighter specifications. 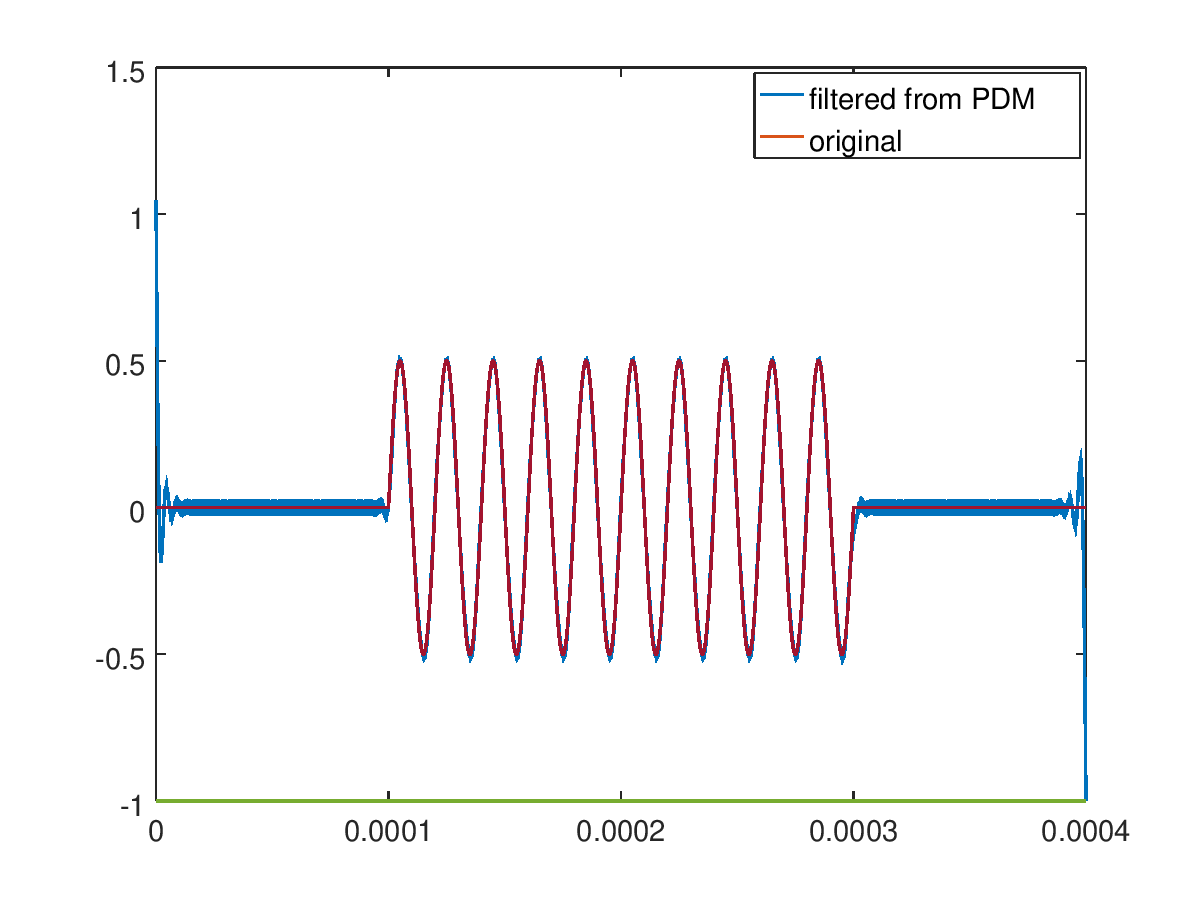 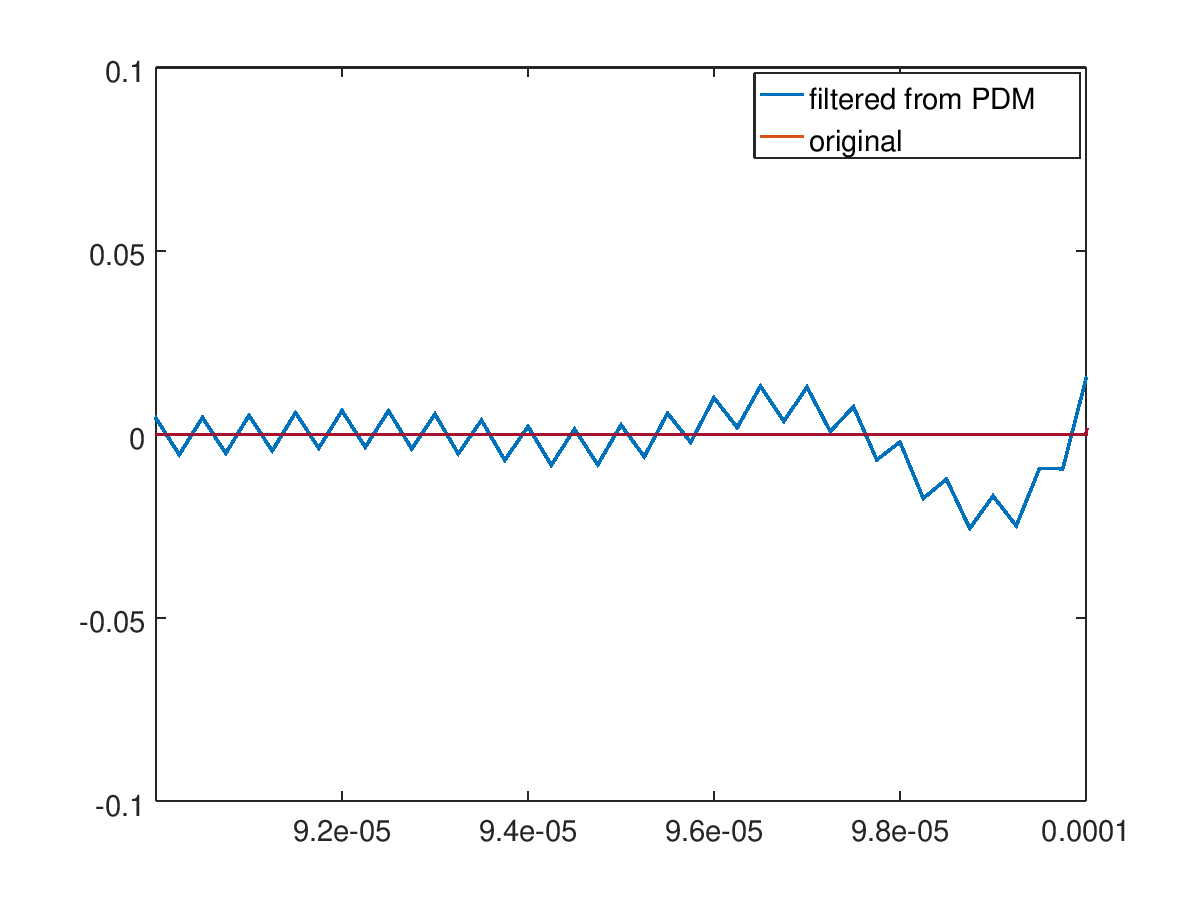 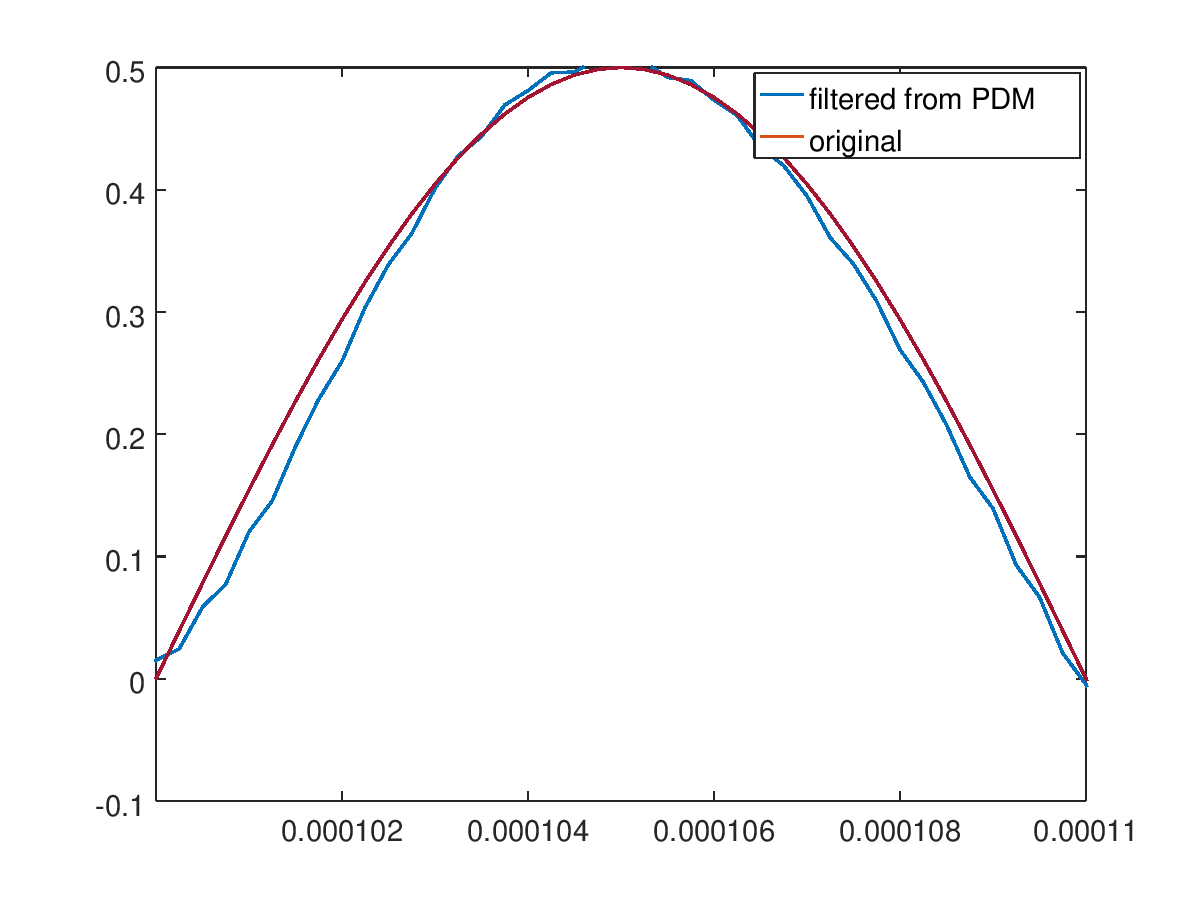 Not the answer you're looking for? Browse other questions tagged audio analog digital-audio or ask your own question.

6
Cheapest reverb to stick in analog audio circuitry?
2
How to turn analog audio into analog cable signal for radio receiver?
1
Adapting 120VAC High Pass Filter to UK 240VAC
3
Calculating bits/sample from a digital MEMS microphone
0
How to prototype analog audio processing?
2
How to interface to a PDM audio source?
0
How to scale audio signal from PCM data to a dB SPL value?
0
Digital filtering after analog to digital conversion (ADC)