How does the compensation resistor in an inverting amplifier compensate for the input bias current?

I can't see how a resistor placed on a whole other input terminal has anything to do with compensating this input bias. i.e. the input stages are just the gates of transistors of differential stage. In this circuit, one of them is completely connected to ground and has no current to flow FROM or TO the op-amp.

This is saying that the non-inverting transistor has a current flowing from its collector to its gate. (At least the way I understand it.)

The most common compensation involves adding a resistor [R3] to the standard inverting amplifier to cancel out bias currents [output offset]. The compensation resistor [R3] causes a current, on the positive terminal, equal and opposite to current flowing into the negative terminal. So any DC output offset caused by the inverting input is cancelled by the non-inverting input. The value of R3 should be equal to the parallel combination of R1 [Ri] and R2 [Rf].

Let's look at the LM324. It's a bipolar opamp and it is also a lot easier to follow that some. But it is still fairly representative of the basic ideas related to your question: 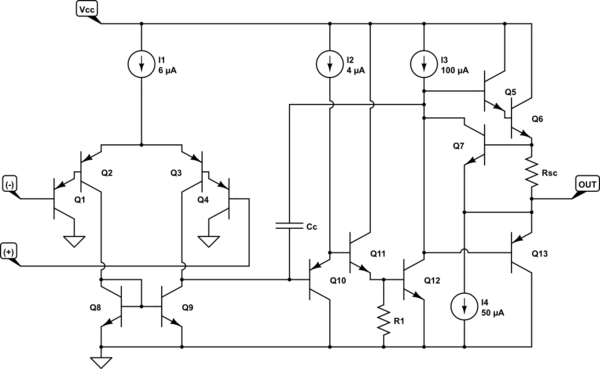 You asked about the diff-pair being either NPN or PNP. In this case, it's PNP. It uses a Darlington PNP arrangement, more specifically, with four transistors; \$Q_1\to Q_4\$. The current source, \$I_1\$, is nominally split evenly between the two tail currents (the collectors of \$Q_2\$ and \$Q_3\$, specifically.) So, if the inputs are of equal voltage, we'd expect that there would be \$3\:\mu\text{A}\$ in each tail.

The overall effect of this is that when the (+) input rises upward with respect to the (-) input, the output rises in response. Which is exactly the desired response.

Some base recombination current is required by \$Q_1\$ and \$Q_4\$. It's modest, because \$I_1\$ isn't a large current. So, nominally, only \$3\:\mu\text{A}\$ is flowing in each tail. Given the Darlington arrangement, the base currents will be on the order of \$1600\times\$ smaller (though we may suggest as little as \$400\times\$ smaller as a conservative limit.) From this, we might suggest at worst, base currents of about \$10\:\text{nA}\$. The specification sheet says that the worst cases are a bit more. But not much more. The reason for this is that they want to deal with cases where the voltage differences are somewhat larger than normal, where one side or the other is moving into saturation mode. So this also is perfectly reasonable.

All of this is just a few very basic circuit concepts and you should make sure, in your own mind, that all of this makes good sense.

So now we are here. All you have to do is realize that from the circuits there needs to be at least some small base currents in \$Q_1\$ and \$Q_4\$ that are sunk externally towards ground. If you tie one of the bases to ground with a \$10\:\text{k}\Omega\$ resistor and the other input to ground with a \$100\:\text{k}\Omega\$ resistor, then you must realize that there will be a similar, needed bias current so that the diff-pair BJTs can remain in active mode (where they need to be.)

Nominally, in this case, with the base currents about the same but where those currents must be sunk through resistors with values that are an order of magnitude different, it must be the case that there is a small voltage difference at the bases of \$Q_1\$ and \$Q_4\$. Since the emitters of \$Q_2\$ and \$Q_3\$ are tied together, this will mean that the voltage difference results in an exponential difference in collector currents. And that will translate into an output voltage that is offset from nominal by some rather high trans-impedance gain. Feedback can help correct that error, of course. But it's an avoidable problem. So you should avoid it.

In short, every op-amp has a differential amplifier at the input. 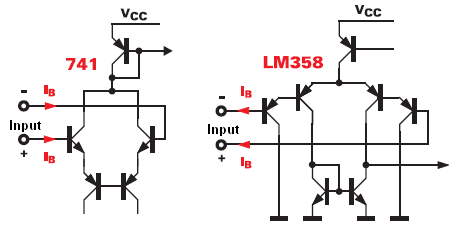 Thus, every transistor needs a "base" current (input bias current) to flow to work as the amplifier. 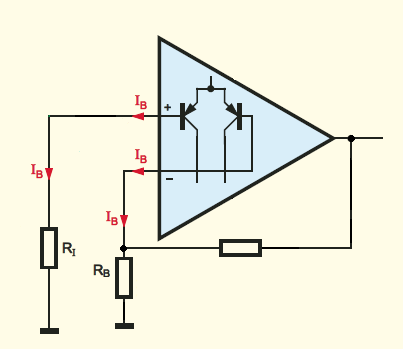 So for example in the inverting amplifier (when \$V_{IN} = 0V\$), this input bias current will cause a voltage drop across the resistor and this drop will be amplified by the amplifier gain. Thus, we have unwanted DC voltage offset at the output. 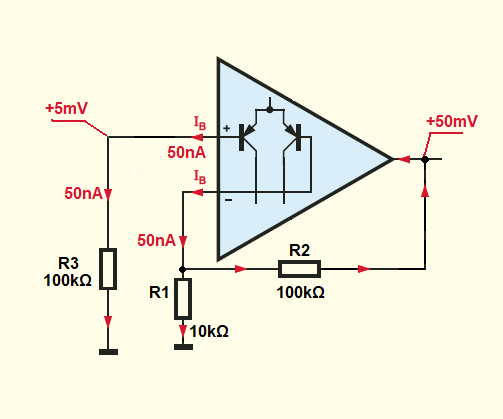 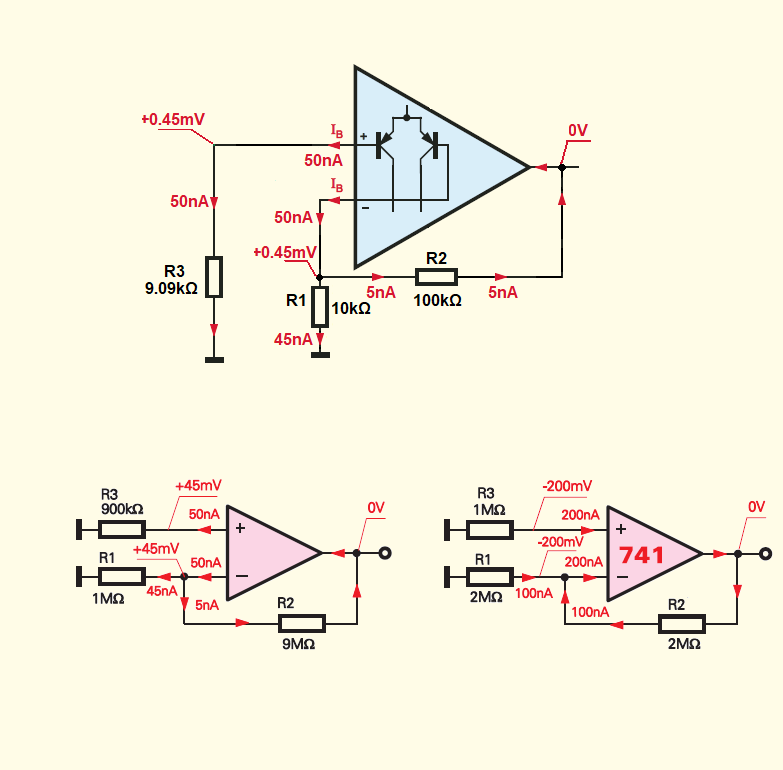 It is difficult to understand this otherwise simple idea because of the weird bias technique used in the input differential stages of op-amps. While the classic biasing is by the side of the input (base), here the biasing is implemented by the side of the output (emitters). This is another topic but still to mention that this trick is possible here since the voltage of the common node between the joined emitters is fixed at the differential mode (we cannot use it in the single common-emitter stage since the emitter voltage will follow the base voltage and there will be no amplification).

But these input bias currents have to go somewhere. And designers have chosen an unusual solution - to pass currents through the input voltage sources. For this purpose, they have to be "galvanic" (conducting); if they are not, they must be shunted with (high)resistance elements to ensure a path for the bias current.

So, this is the situation - input bias currents flow through the input voltage sources and their internal resistances. If there are additional resistors in series (as in the case), bias currents will flow through them as well. You can see this in the simplest differential pair (in principle, this is the same configuration). Let's first consider the case with equal input voltage sources but with no base resistors included (Fig. 1): 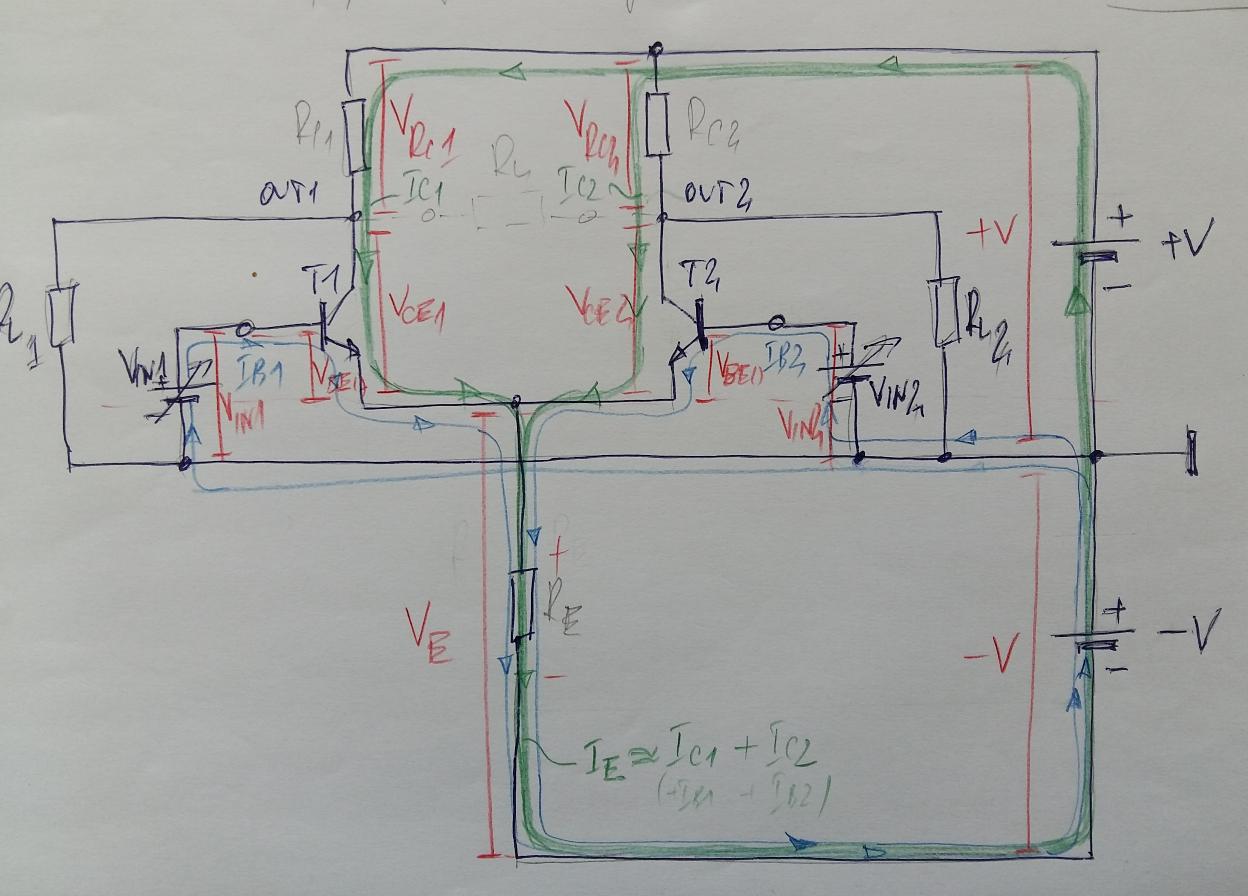 Fig. 1. The simplest differential pair with emitter resistor and with no base resistors included (this is not the most beautiful circuit diagram in the world... but it still works:)

The bias base currents Ib1 and Ib2 are represented in Fig. 1 by thin loops in blue. As you can see, they are created by the negative power supply -V. The currents flow through Re and Vin and enter the bases (Re is replaced in the op-amp stage by the complex pull-down circuit).

Let's now consider the case with zero input voltages but - one of them "ideal" and the other real. For example, the left input (T1 base) is directly grounded and the right input (T2 base) is grounded through a resistor RB: 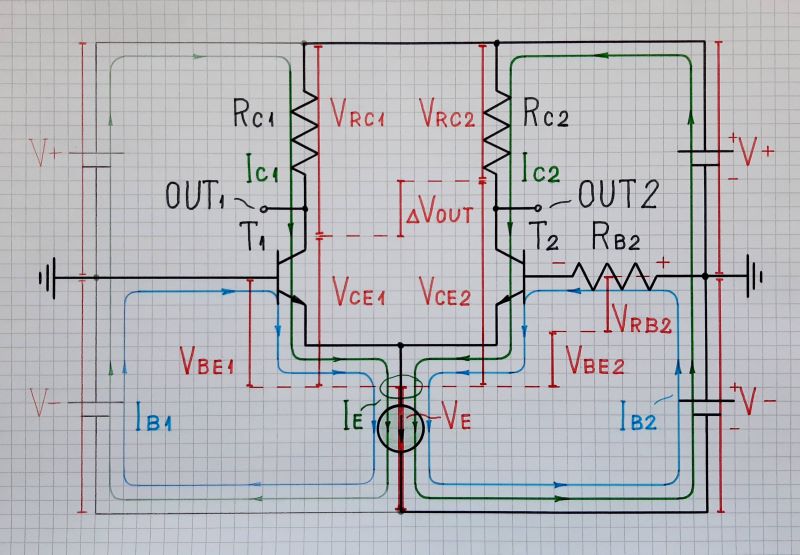 Fig. 2. Differential pair with an emitter current sink and a base resistor RB2 included

I have explained this conceptual arrangement in a similar question - Why is the voltage drop created by a current source added? 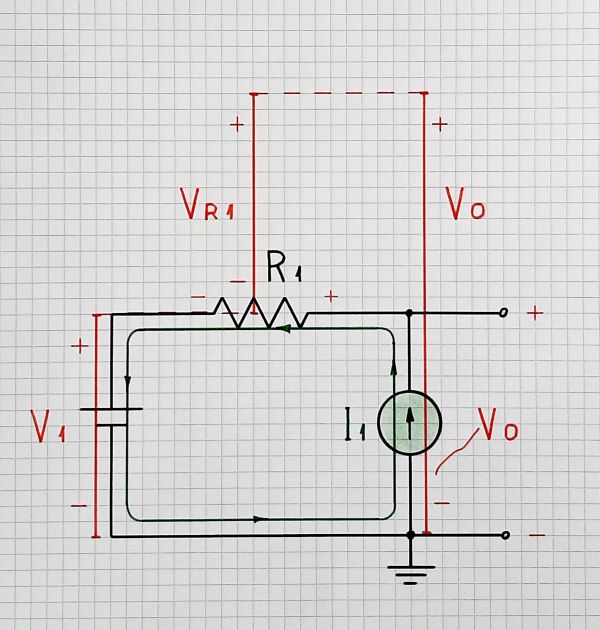 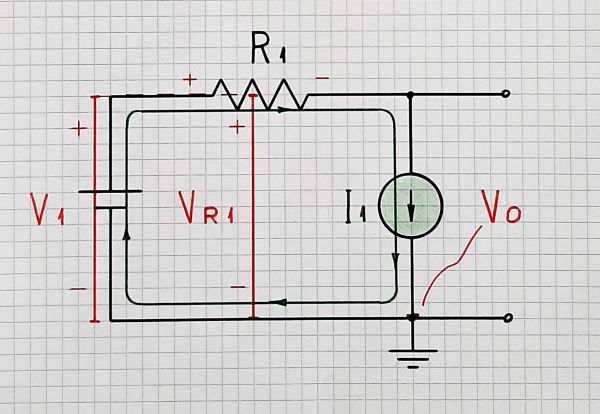 We can adjust the voltage "produced" by these "batteries" by changing the resistance (we cannot change the current since it is set by the internal bias current source in the emitters).

In the OP's circuit, a voltage drop is created by I- across R1||R2 that is added to Vin-. To compensate it, we have to add the same voltage drop to Vin+; so we include a resistor R3 with the same value (R1||R2) in series to Vin+.

So, this is a simple electric arrangement of two (voltage and current) sources and a resistor where the combination of the current source and resistor can be thought of as another but constant voltage source in series to the varying input voltage source.

This circuit solution is used in internal op-amp structures (e.g., in Widlar's 709) to "shift" the voltage variations at the output of the input stages.

Not the answer you're looking for? Browse other questions tagged operational-amplifier feedback inverting-amplifier or ask your own question.