I asked a question the NXP forums here about the TEA2208T (datasheet) which is an active bridge rectifier. I was told this part is a full wave rectifier and not a peak rectifier and therefore a rectified AC voltage would look like this even with a smoothing cap after rectification:

Where a peak rectifier's output would look like this with a smoothing cap:

Edit (to respond to Cristobal's answer): So I believe I understand now. Say for the positive half cycle of the ac input, two mosfets will conduct and we can idealize those mosfets as a normal conductor like so 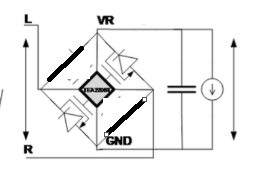 The difference here is that a diode allows current to pass in one direction, while the FETs (while on) allow current in either direction. Presumably, NXP designed it to keep the appropriate FETs on at any time one of the input voltages is higher than the other. Since you're conducting through the entire half-cycle, your capacitor is being discharged through the bridge as well as being charged. The FETs will stay on until the input polarity reverses, while the diodes will stop conducting anytime the instantaneous input voltage is lower than the voltage on the cap.

The top diagram is a bit misleading: it includes a cap on the output that reasonable adults would assume to be a power supply filter cap.

Upon reading of the TEA2208T datasheet, it appears that cap is not for that purpose - it's probably a small stabilization cap or some such. The TEA2208T is just doing the full wave rectifier function, so its VR output is in fact just that. It's better than a standard diode bridge because in overcomes the forward drop of diodes by using cleverly controlled MOSFETS.

But to get a true filtered output you do need to follow the whole thing with a diode-cap combo as shown in the datasheet: 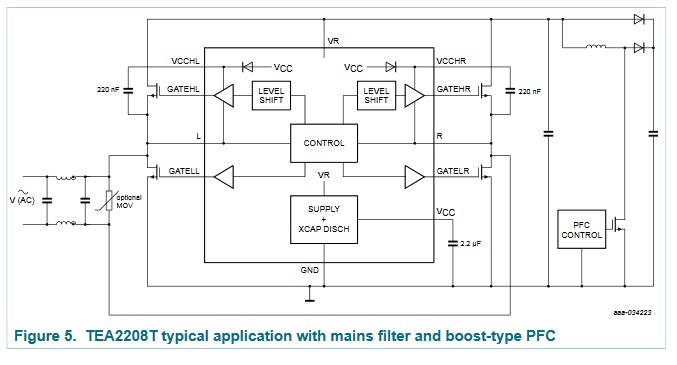 On power off the MOSFETS are used to discharge surrounding caps, but not during normal operation.