Confusion about open-drain for I2C

Just some clarification on the open-drain concept for I2C.

Open-drain configuration is used mainly to avoid any sort of short circuit in case one device is one line is being pulled low by one master while the other master is pulling the line high. And how it works is by whichever master pulls the SDA line low first gets to control the slaves, and by pulling the SDA line low in this diagram means setting the gate voltage of the MOSFET high, isn't it? Because when it's high, the output/drain is pulled low. If that's the case, why is the gate labelled as SCKN1 OUT as opposed to SCKN1 IN? 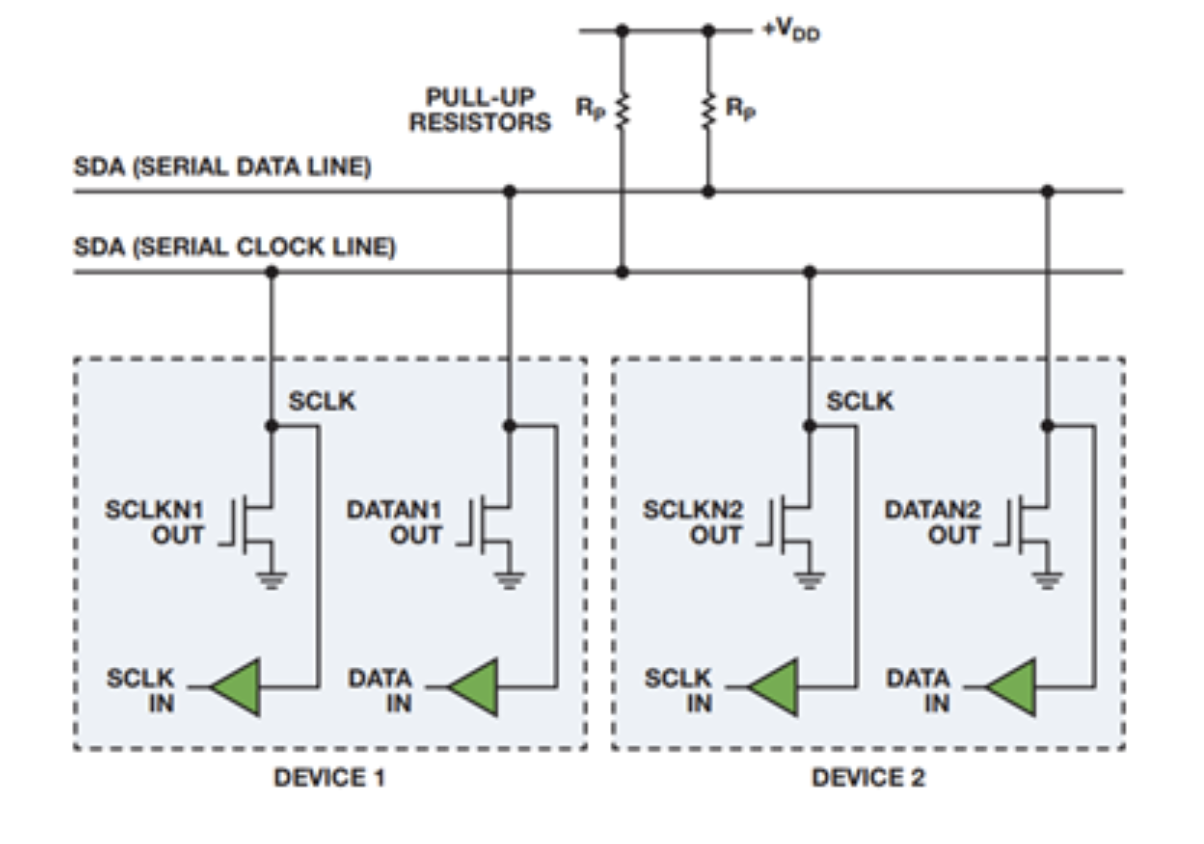 Your reasoning isn't quite right. The open drain configuration is used so that any line can be an output and an input, even both at the same time. So, to read the state of SCLK you look at SCLK IN. If you want to drive SCLK you drive SCLKN1 OUT. Obviously, if you drive SCLK low, you will read back a low signal. But if you "drive" it high (actually you release it), then by reading the input you can find out if it really is high, or if another device has driven it low.

It is difficult to tell from your comments where the misunderstanding lies. So let's look at a few facts to see if we can find it.

So, in the big picture, each device must be able to control both bus lines, and be able to read their state back at the same time. And make sense of it all.

I feel I don't understand the relation between the paragraph of description and the last question clearly.

Open-drain output plus wire-and work with some concepts in I2C system perfectly. With open-drain output, one device can output LOW. And when it is going to output HIGH, it just gives up driving the line, let the external pull-up path do that. Because there is no damage when multiple devices output LOW concurrently, we can easily expand the system by simply attaching a new I2C device to the SDA/SCL bus. Each device is listening to the bus via its own input path all the time. So they can detect bus collision if the read back value from line is not equal to what it is sending. The device who detects a collision loses arbitration, and quits transmission silently which will not introduce any overhead to the entire system. The same idea is used in CAN system.

(Struggling my english. Hope I made it clear.)

The I2C output driver FETs are doing just that: driving the outputs to a chosen voltage. Other devices will detect that line voltage level through input logic gates.

The fact that the driver actually inputs and sinks current from a pull-up resistor to do it is therefore irrelevant. A push-pull output driver is sourcing current when driving high and sinking it when driving low but it's always called an output.

Not the answer you're looking for? Browse other questions tagged i2c embedded or ask your own question.

5
MOSFET and clamp on I2C interface lines as level tranlastor
3
I2C communication with AVR - how to let the lines “float”?
1
trouble getting two PICs to communicate via I2C
9
Open drain concept in I2C bus?
5
Why do I2C lines use open drain driver instead of tri-state drivers?
22
Why I2C designed to work with pull-up resistors and not pull-down ones?
7
VHDL: What is correct way to model open collector output for FPGA?
5
Is the SCK line in I2C unidirectional or bidirectional?
0
I2C Communication Open drain benefits vs Push pull
0
I2C clarification