I want to power the gate of an IRLB3034 MOSFET by a PWM output from an arduino. I know that the current required to charge the gate increases, the higher the switching frequency is. With 5v powering the arduino, and a 490Hz PWM signal, what will the required current? The max current from an arduino pin is 40ma, will I need a transistor to power the MOSFET gate? The MOSFET will only be switching a 2A load.

You should first put a gate stopper resistor, \$R_G\$, to limit the current drawn from the MCU's pin when turning the MOSFET on (remember that there is a large capacitor, \$C_{iss}\$, at MOSFET's gate, and it may draw a large current even for a short time when driven from a low-resistance source).

This resistor and the input capacitance of the MOSFET also form a 1st order LPF having a cutoff frequency of \$f_C = (2\pi \ R_G \ C_{iss})^{-1}\$. Since a PWM is the case, \$R_G\$ should be selected such that \$f_C\$ can be at least 5 times the PWM frequency, to prevent the PWM signal will not be chopped off at the gate of the MOSFET:

This resistor will limit the instantenous current drawn from the MCU's pin to less than 1mA.

As BeB00 suggested, it would be better if you use another NMOS with lower gate charge and input capacitance.

If you really worry about the MCU's pins and cannot trust the gate stopper resistor then you can put a totem-pole before the MOSFET: 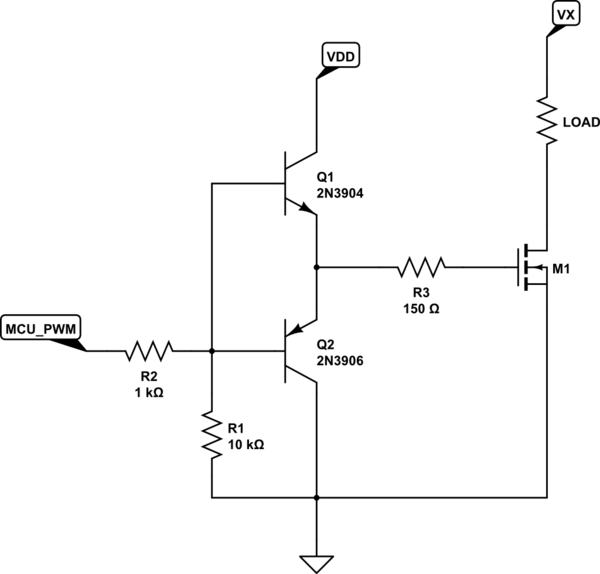 This configuration significantly reduces the current drawn from MCU's pin.

The gate capacitance is around 10nF, so if you add a 500 ohm resistor (limiting the pin current to 10mA), the switching time will be around 10-15us, which should be fine for your application. This mosfet is pretty over-spec for what you want (it can switch hundreds of amps), so maybe you could choose a less powerful transistor with a lower gate capacitance.

You left off how rapidly you want the thing to switch. I'll assume that you want to switch in around 1% of the total PWM time (so, \$20\mu\mathrm{s}\$) -- adjust my answers up and down based on what you really want.

With 5v powering the arduino, and a 490Hz PWM signal, what will the required current?

The max current from an arduino pin is 40ma, will I need a transistor to power the MOSFET gate?

You can do this from your Arduino pin. Normally you'd want a gate driver, but one of the suggested transistor circuits would work to speed things up.

The MOSFET will only be switching a 2A load.

That thing is good for almost 200 amps with proper heat sinking!! You do realize that you could use a much smaller transistor, yes?

Not the answer you're looking for? Browse other questions tagged arduino transistors mosfet gate-driving powermosfet or ask your own question.