I am reading this book "Computer Architecture and Organization" by Subrata Ghosal because I'm curious about how data is "stored" in the CPU register.

When I say "data is stored", I imagine something that allows me to:

And the book claims that the computer register allows that capability.

Now a 4-bit register can be made up of 4 D flip flops:

I imagine this register is inside a RUNNING computer, then the CLK will alternate between 1 and 0 at specific interval. So my question involves this situation:

So it seems in order to retrieve the correct value I "stored" at a previous point in time, a necessary condition is that the correct input to the flip flop must also happen but there's nothing to guarantee that. This doesn't sound like "storing data" to me.

I must have misunderstood something but couldn't figure it out.

The circuit you show in Fig. 3.19 is (in my opinion) mislabeled as a D flip-flop. It is actually more clearly identified as a gated D-latch.

Gated D-latches are sometimes also confusingly labeled 'level-triggered flip-flops'. Again, better to use the term latch to be more clear.

Back to the diagram. The 'clock' would more correctly be called 'write' or 'enable'. You would not normally use a free-running clock to control a latch, but instead gate it with a write-enable signal.

Whatever you call it, the gated D-latch will hold its data as long as the 'clock' (really, enable) is held low, and follow the input while enable is held high, so at least that description is correct.

While D-latches or their equivalents (like SRAM cells) can be (and often are) used for storage, flops used for registers are typically of the ‘master-slave’ D-flip-flop type. That diagram looks like this: 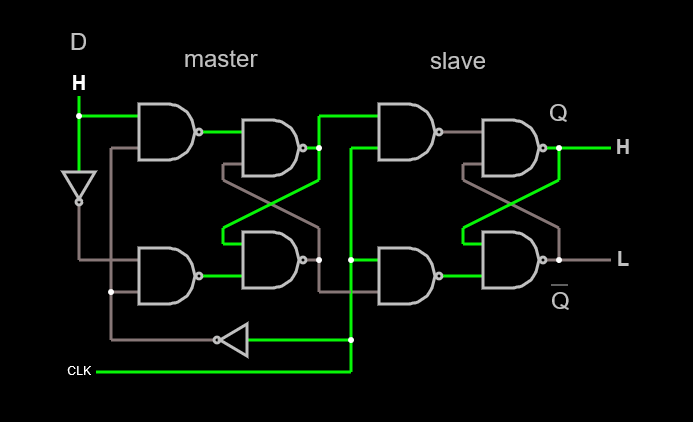 For a positive-edge flop like the one shown above, the clock controls the stages as follows:

In a system then, the main difference between a latch and a flop is this:

This means that with the D flop, clock-to-Q is only related to the clock. This simplifies timing.

One more thing. You can construct D flip-flops from multiplexers. In CMOS this is the most common method. Here's an example: 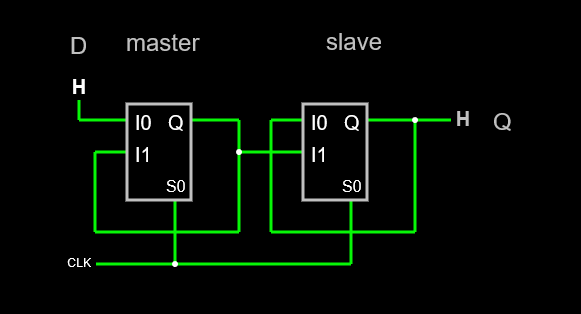 Looking at it this way, you can see the follow-hold behavior of each latch more clearly.

The Trick is, a Register has some more signals and the FF is only a basic building block.

normally you have the data input, the data output, the clock input plus an enable signal. Data will only be transfered into the Register when enable is valid.

Of course you also can gate the clock like Marcus Müller said, but thats uncommon when you code logic for FPGA's or ASIC's.

Memory's or Registers for peripherals connected on a bus have more stuff like address decoders to generate the enable signals, etc...

so the plain D-FF is just a simplification to transport the basic concept. It's not how its done in reality. There are multiplexers, comparators and a lot other stuff around to get it work.

I imagine this register is inside a RUNNING computer, then the CLK will alternate between 1 and 0 at specific interval.

The clock is only pulsed when writing data into the register. At all other times (including reading the register) the clock is inactive, so the data remains stored.

The data inputs can be connected to several registers as a bus. Only the register being clocked will have the data stored in it. The other registers will simply ignore the data and hold their contents.

To read data from a specific register onto the bus, its outputs must be connected through tri-state buffers or a multiplexer. Reading the register is then achieved by activating the buffer or selecting the appropriate input of the multiplexer. The register's clock is not pulsed when reading.

Here is part of the register board schematic in the C74-6502, a homemade reproduction of the 6502 CPU using TTL ICs:- 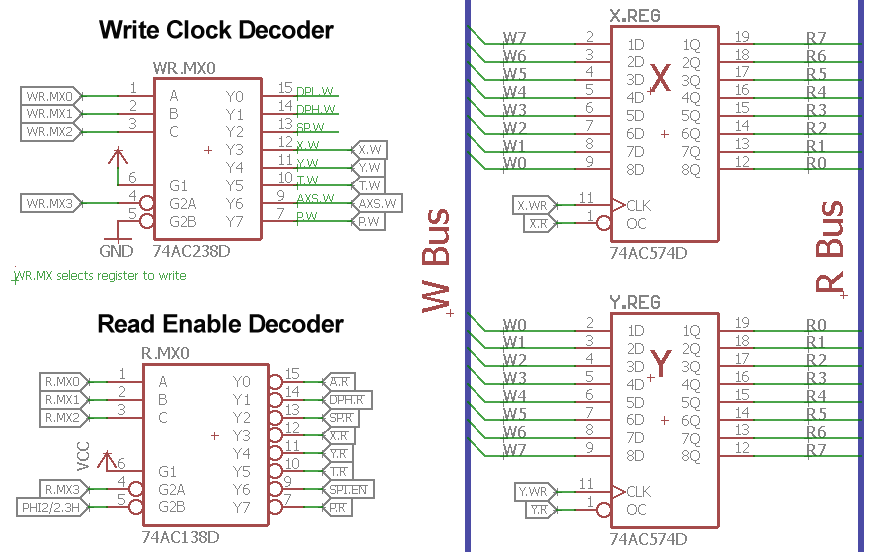 This design has separate Write and Read Data buses, each 8 bits wide (the blue lines in the schematic).

The 74AC238 and 74AC138 decode the register write and read lines respectively. The X and Y registers both use a 74AC574 Octal D flip/flop. Its Tri-state data outputs are enabled when the OC (/OE) input is low.

Here is the internal logic diagram of the 74AC574:-

then the CLK will alternate between 1 and 0 at specific interval.

no, that's the write clock. That only changes when there's valid data to store in the flip flop.

The pure flip-flop logic you have there updates on every clock cycle, which is not what you want.

In order to use these as a register, there is also a "write enable" signal that remains low unless the register is to be overwritten in this cycle.