Burning a transformer and replacing it from 110V to 220V

Today I received a preheat bed AOYUE-AO853A. I was really eager to plug it in an test it, ignoring the voltage input rating. It worked for a second making a strange noise, but then some smoke started coming out.

I turned it off, unplugged, I left the capacitors to drain and finally I attempted opening it after it cooled. It turned out the transformer was rated for 110V 60Hz.

Update: I noticed that the board is not only hooked to DC (from the transformer), but also to AC. 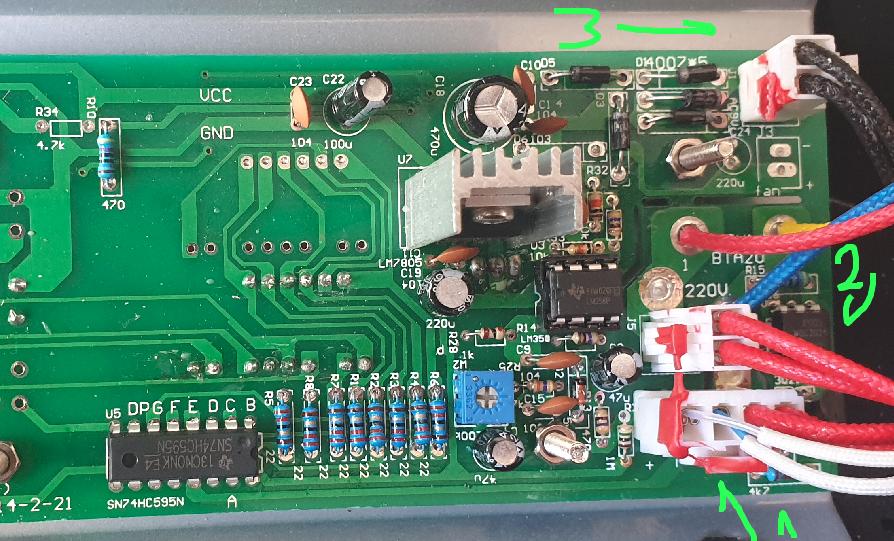 As required by a top user, I posted a picture of the wiring for the heating element. It seems it's wired in series already.

This device is basically a temperature controller with a sensor (thermocouple or thermistor most likely), a control circuit, and a triac-controlled mains heater. The unit is powered from a control transformer.

Such a transformer will output considerably less than double output voltage if the input voltage is doubled, because they're run fairly close to saturation. That's why the transformer failed, because it saturated. Given the nature of the other components and ratings, there's a fairly good chance that the rest of the circuitry is okay. So replacing the transformer with a 110VAC:9VAC 8VA or more transformer could well restore it to functionality, but it would still be a 110VAC unit. Which doesn't solve your problem unless you intend to use a voltage converter to power the unit.

As far as converting the unit- the transformer can be substituted for one with a 220VAC primary voltage. However, the heater(s), as @Andrew noted, are a more serious problem. At 4x the rated power they will burn out in short order. If there is only one pair of wires to the heater itself you're probably scuppered unless you want to try to wait for a 220VAC spare part to come.

The BTA20 triac and (probably) MOCxx opto-triac drive circuit may or may not be appropriate for 240VAC. I would guess they are okay, but I would also check them carefully.

So it's upon you to check what was after the transformer and if there was a rectifier, capacitor and stuff which was rated eg. 16 or 25V.

Hard to tell if, but I suppose possibilities are high you fried more than the transformer

The windings ratio would be approx 2:1 so the output AC from the secondary winding was likely to have been 18V before the transformer expired. If you didn't blow any electrolytic caps i.e. a big mess, discharge and smoke and you can't see any obvious damage you may have got away with it. Bear in mind that even if you do replace the transformer the PSU board may have devices with ratings consistent with a 120V supply e.g. smoothing caps.

If you're very lucky you might get away with just changing the transformer. It's worth a try. As mentioned you'll need a 240V transformer with a 9V secondary rated >8W.

Not the answer you're looking for? Browse other questions tagged power-supply transformer ac dc soldering or ask your own question.