So I'm fairly certain that this is impossible, but regardless- I was spending some time designing circuits based on transistor logic when I saw a suggestion that it would be possible to design similar circuits (or at least basic individual gates) using wires, batteries and globes alone. The gates that operate based on negation work by forcing a short circuit using the principle that electricity takes the path of least resistance. 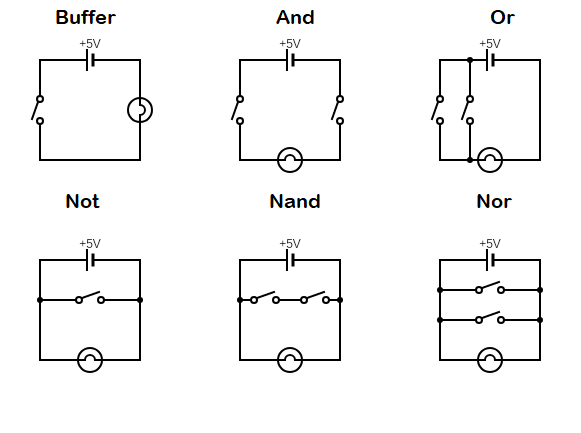 I got a little caught up in expanding these designs, because unlike with transistor logic, the ones and zeroes in these kinds of circuits are in the form of closed or open spst switches- and with no form of manipulating signals, combining gates becomes very hard very quickly.

The part I got stuck on was an application of this system to a XOR gate. Such a gate would be simpler if series and parallel circuits would be easy to implement simultaneously- but after a bit of playing around with designs, I've realized it's not as easy as the rest. 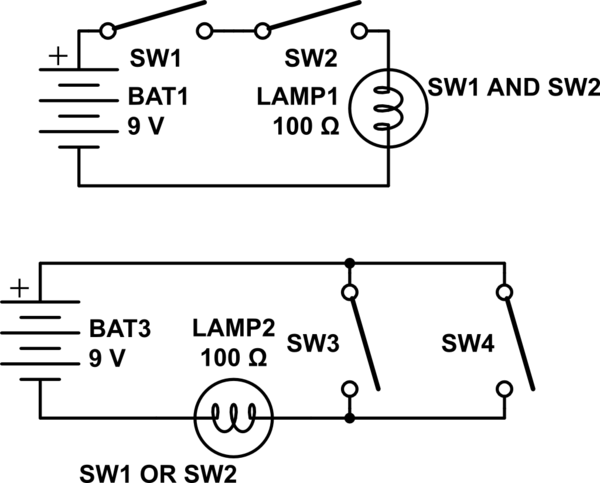 (Sorry for the messy diagram) The first figure shows a load, which takes the result of A AND B. The second figure shows the load which takes the result of A OR B. My question is, is it possible to make a simple circuit with only 2 spdt switches and 2 loads, with 1 load taking switch A AND B and the other taking A OR B. Resistors aren't allowed, multiple power sources are, and forcing a short circuit is allowed too.

with SPDT switches here's one way 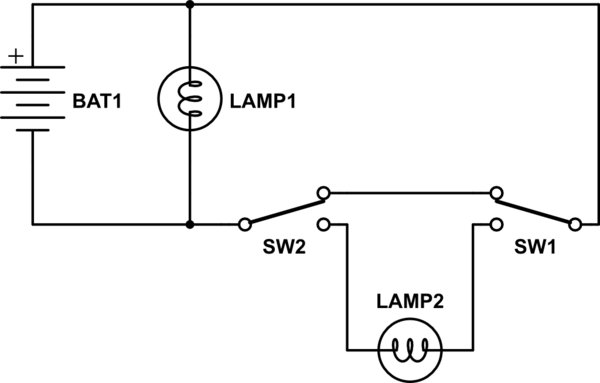 For a classic paper on logic implementation, you might read the masters(1) thesis of Claude Shannon.

By showing Relay Logic (somewhat like your Switch Logic) could implement Boolean Algebra, and by bringing the Church_Turing Thesis(2) into plan, Shannon thus showed ANY COMPUTABLE ENTITY could be modeled by Relays.

That meant mankind now had means to compute anything and everything.

Not the answer you're looking for? Browse other questions tagged circuit-design logic-gates or ask your own question.

0
How to make the the voltage higher after a logic gate
0
What 3-input logic gate is this?
0
Reimplement circuit using 1 2x4 decoder and 2 logic gates
2
Logic circuit designs in industry
0
Is it possible to build an AND gate from a NOT gate?
1
How should an AND-OR-INVERT gate look like?
5
Difference between no input and a zero input in digital electronics